Review: A Lady in Disguise (Daughters of Hampshire #3) by Sandra Byrd 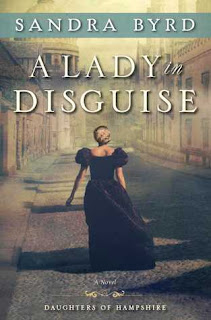 A Lady in Disguise is the third addition to Sandra Byrd's Daughters of Hampshire series. In this book, Miss Gillian Young investigate the death of her father. She takes a position of principal costume designer at the Drury Lane Theatre Royal. She uncovers shocking secrets her father had. Do these secrets hold the key to what happened to him and why he was killed? She begins suspecting everyone that may be involved including, Lord Lockwood, who she has developed a romantic feelings for. The closer she gets to the truth to what happened to her father, the more she finds herself in danger. Deciding she wants to find the real killer, she takes on a disguise hoping it is not too late before someone else's life comes to an end, including her own.

A Lady in Disguise is a perfect "who done it" story. The suspense was quite intense at times and I was surprised with all the twist and turns that was involved. A reader will be guessing all the way to the end to what really happened to Gillian's father. I admire Gillian's determination and strength throughout the whole story.

I really enjoyed this book and I think this is definitely my favorite of the series.

I received this book from the author, but was not required to write a review. This review is of my own honest opinion.