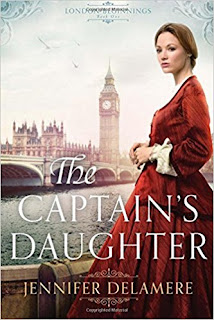 The Captain's Daughter is the first installment to Jennifer Delamere's new series, London Beginnings. After having experienced hard times, Rosalyn Bernay is lead to a theater to work and dreams to one day of becoming a star on stage. While recovering from a wound received during his time in the army, Nate Moran, takes a position at the same theater where Rosalyn is working. He is bitter about his life and hopes to escape back to the Army after he heals. That is, until he meets Roslyn!

I thought Captain's Daughter to be a pretty good historical fiction. I enjoyed Rosalyn and  love how she has been able to overcome her hardships and continue to follow her dreams. The story is sweet, delightful, and entertaining, that includes faith and inspiration. There is a powerful message that all can learn from.

I recommend this book and would give it four out of five stars.