England 1650: Civil War has given way to an uneasy peace in the year since Parliament executed King Charles I. Royalist officer James Hart refuses to accept the tyranny of the new government, and to raise funds for the restoration of the king’s son, he takes to the road as a highwayman. Elizabeth Seton has long been shunned for being a traitor’s daughter. In the midst of the new order, she risks her life by sheltering fugitives from Parliament in a garrison town. But her attempts to rebuild her life are threatened, first by her own sense of injustice, then by falling in love with the dashing Hart. The lovers’ loyalty is tested through war, defeat and separation. James must fight his way back to the woman he loves, while Elizabeth will do anything to save him, even if it means sacrificing herself. Traitor’s Knot is a sweeping tale of love and conflicted loyalties set against the turmoil of the English Civil War.

“A hugely satisfying read that will appeal to historical fiction fans who demand authenticity, and who enjoy a combination of suspense, action, and a very believable love story.” - Elizabeth St. John, author of The Lady of the Tower
“A thrilling historical adventure expertly told.” - Carol McGrath, author of The Handfasted Wife

Traitor's Knot is available in eBook & Paperback at Amazon

Cryssa Bazos is a historical fiction writer and 17th Century enthusiast, with a particular interest in the English Civil War (ECW). She blogs about English history and storytelling at her blog, the 17th Century Enthusiast, and is an editor of the English Historical Fiction Authors blog site. Cryssa's debut novel, Traitor’s Knot, a romantic tale of adventure set during the English Civil War. Traitor’s Knot is the first in a series of adventures spanning from the ECW to the Restoration and is now available from Endeavour Press. For more information visit Cryssa's website. You can also connect with her on Facebook, Twitter, and Goodreads. 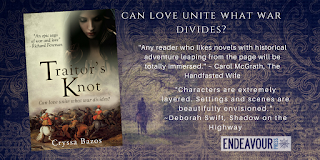 During the Blog Tour we will be giving away a signed paperback copy of Traitor's Knot!
To enter, please enter via the Gleam form below. Giveaway Rules
– Giveaway ends at 11:59pm EST on August 18th.
You must be 18 or older to enter.
– Giveaway is open to residents in the US & Canada only.
– Only one entry per household.
– All giveaway entrants agree to be honest and not cheat the systems; any suspect of fraud is decided upon by blog/site owner and the sponsor, and entrants may be disqualified at our discretion.
– Winner has 48 hours to claim prize or new winner is chosen.
Traitor's Knot

Traitor's Knot is a wonderful read. The setting of England during the 1650s, I found fascinating. Elizabeth Seton is a great character. she is no weak, damsel in distress type. She is a intelligent and strong woman. I love her. Especially, when she is with James. The story itself I found to be interesting and full of historical details. It did get a little slow to me midway but it picked right back up.

If a reader is looking for a historical with adventure, action and romance, I would most definitely recommend this one for them. Looking forward to more this author in the future.

I received this book from HFVBT. This review is 100% my own honest opinion.