Book Blast and Giveaway: The Fall of Jake Hennessey by PJ MacLayne

This post is part of a virtual book tour organized by Goddess Fish Promotions. P.J. MacLayne will be awarding a $25 Amazon or B/N GC to a randomly drawn winner via rafflecopter during the tour. Click on the tour banner to see the other stops on the tour. 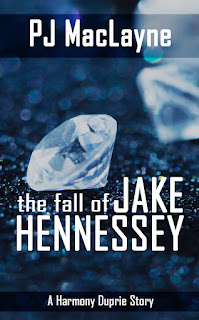 Jake Hennessey deals in selling fine jewelry of an illegal nature. The thrill of getting away with it is his addiction. When he hears a rumor about a rare old book in the personal collection of a small-town librarian, he gets the urge to try a new game.

After all, even jewel thieves get bored.

But the librarian, Harmony Duprie, isn't what he expected and the challenge becomes serious business.

In order to win, Jake's going to have to play by a new set of rules—and make them up as he goes along—because this time, he's playing for the rest of his life.

The flash of metal reflecting a blinking neon beer sign in the front window had Jake on his feet and halfway across the bar in a second.

“Settle down, Duane,” the bartender said, backing up a few feet.

Jake recognized Duane's type. Too skinny, pockmarks in his face, scabs on his arms, shaking so hard Jake didn't know how he remained standing. If Duane was crashing, he became doubly dangerous.

Chairs scraped as other customers moved out of reach of the steak knife Duane waved, aiming at everyone and no one. There'd be no happy ending to the situation, at least as far as Jake foresaw. He circled to get in behind Duane.

“Put down the knife,” said one of his friends from several feet away.

“Take it easy,” said the other.

Duane didn't pay attention. The weapon traced aimless circles in the air. He advanced two steps closer towards the bartender. “Don,” he slurred. “Don cheat me.”

“Nobody's cheating anybody,” the bartender said. “Put down your knife and go home and sleep it off.”

It was easy to predict Duane's next move. Jake had seen it repeated too many times. The druggie lunged at the bartender, but Jake reacted first and grabbed his arm. A dangerous maneuver, because tweakers often found bonus strength out of nowhere. He'd been in fights where it took three bouncers to subdue one meth head. Fate was on his side this time. The knife clattered to the floor, and a kick to the back of his knee ensured Duane did, too.

While all hell broke loose, with everyone yelling at Duane and Duane's friends yelling at everyone else, Jake slipped out the front. 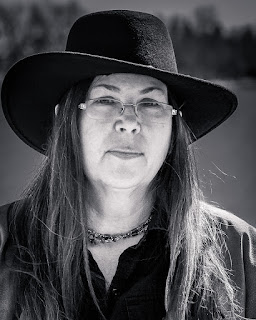 : Born and raised among the rolling hills of western Pennsylvania, P.J. MacLayne still finds inspiration for her books in that landscape. She is a computer geek by day and a writer by night who currently lives in the shadow of the Rocky Mountains. When she's not in front of a computer screen, she might be found exploring the back roads of the nearby national forests and parks. In addition to the Harmony Duprie Mysteries, she is also the author of the Free Wolves adventures.

P.J. MacLayne can be reached on: