Review: Trusting Grace (Virtues and Vices of the Wild West #3) by Maggie Brendan 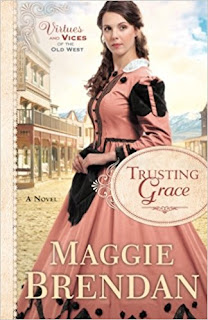 Trusting Grace is the third book from the Virtues and Vices of the Wild West series by Maggie Brendan. In this installment, widowed and childless, Grace Bidwell, is taking care of her ailing father and struggles to run a farm alone. She posts a help wanted ad in town to hire someone at the farm. Widower Robert Frasier, comes to town with three children in tow. He has a lot of hurt and bitterness toward his late wife and trusts no woman. When Grace meets the three precious children, she instantly connects with them. Feelings begin to grow between Robert and Grace, but can they get over the past to move forward?

I thought Trusting Grace was a pretty good read. Even though it was predictable, I still enjoyed it. I like the characters of Grace and Robert but Grace's father and Stella were my favorites. The story is sweet with the lesson of learning how to have faith, taking chances, moving on from the past, and being able to forgive. I would give this book four out of five stars and believe it is most definitely a worth a read.

I received this book from the author, but was not required to write a review. This review is 100% it's my own honest opinion.