Review: The House at Saltwater Point by Colleen Coble 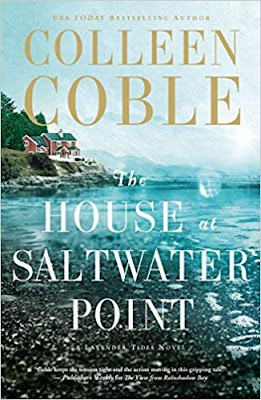 The dangerous beauty of Lavender Tides is harboring secrets that reach around the world.
Ellie Blackmore is making a name for herself as a house flipper. But when her sister Mackenzie disappears, Ellie can’t focus on anything but uncovering what happened. Her only clue is the bloodstain on the deck of Mackenzie’s boat. Ellie knows her sister isn’t on the best of terms with her ex-husband, Jason, but he wouldn’t kill her—would he?
Coast Guard intelligence officer Grayson Bradshaw believes Mackenzie faked her own death after stealing a seized cocaine shipment. The problem is convincing Ellie, who seems to view him as the true enemy.


Both Ellie and Grayson want truth, but truth—and family—is often more complex than it first appears. From international terrorism to the peaceful lavender fields of Puget Sound, The House at Saltwater Point is a thrilling race to uncover the truth before it’s too late.

The House at Saltwater Point is the second installment from Colleen Coble's exciting series, Lavender Tides. I enjoyed this suspense filled novel. There were so many twists and turns I did not expect. It held my attention so much, that I had no problem turning the pages.

I give The House at Saltwater Point 4 ½ stars. I can not wait to see what the author has in store next in the series. A good, clean, romantic suspense.