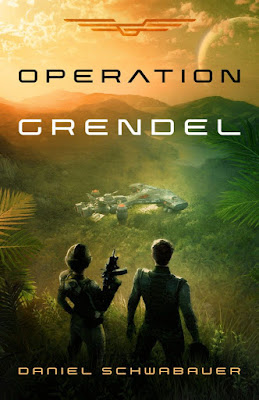 It’s the war story he’s dreamed of. But the battle may cost him his mind.

But when his commanding officer, Captain Ansell Sterling, is fatally wounded before the negotiations can begin, Dahl can no longer just report on the mission. He’s ordered to complete it. With help from the AI embedded in Sterling’s comms bracelet, Dahl must impersonate his commander—a Marine Corps hero and psychological operations expert.

However, Sterling’s AI may be luring him to surrender more than he realizes. And the mission Corporal Dahl thinks he’s running isn’t the only operation underway. 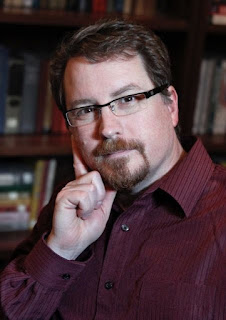 Daniel Schwabauer, M.A., is a lifelong reader of speculative fiction. He studied the genre under science fiction great James Gunn before graduating with honors from Kansas University’s Masters program in Creative Writing in 1995. Winner of the Eric Hoffer and Ben Franklin awards for his middle grade fantasy series, The Legends of Tira-Nor, Daniel enjoys riding his motorcycle on country roads and pondering other worlds. He lives in Kansas City with his wife and dog.

The Operation Grendel Origin Story
I’ve always been fascinated by the power of storytelling, especially as a lever for moving culture.  For several years I studied the development of modern propaganda, the rise and fall of yellow journalism, and the relationship of these to psychological warfare. This culminated in 2017 with a brief investigation into quantum computing and the rising popularity of trans-humanism. Sometimes the best story ideas are combinations of things that have rattled around in the back of your mind for years.
Operation Grendel is a keyhole glimpse of a future in which every person in the galaxy is bonded to an artificial intelligence. Some AIs are embedded in the brain, and some are snapped onto the wrist as a wearable device. I didn’t realize when I started writing the book that Elon Musk had already launched Neuralink to create this technology in real life. I discovered the corporation after finishing my fourth draft.
The use of this technology probably means a lack of autonomy. How can you think for yourself, or even know what you think, if your thoughts are constantly being shaped and influenced by a quantum computer wirelessly connected to your brain?
Then again, is that all we really are as humans—biological computers? I don’t think so. But if not, then there will surely be resistance to the trans-humanist movement. Which means, in a work of fiction, clearly opposing sides. One empire supports this integration of man and machine; the other places limits on AI technology.
But “warring empires” was not a story I felt capable of telling. I wanted something closer to home, something smaller and more accessible, something more human. I wanted to show what a life spent entirely under the influence of an inner nanny—a substitute Holy Spirit—might look like.
Well, who better to tell that story than a man who has, in his own way, been manipulating others through storytelling? In other words, a journalist.
This fit my desire to write the story as military science fiction. Since I never had the honor of serving in the armed forces, I needed a way to give my narrator a believable voice. Corporal Raymin Dahl, a military reporter who barely scraped his way through reservist boot camp, fit the bill.
Before long the story seemed to take on a life of its own.

Through the Fire Blogs, April 4

Adventures Of A Travelers Wife, April 5

Because I said so — and other adventures in Parenting, April 6

For Him and My Family, April 10

Labor Not in Vain, April 12 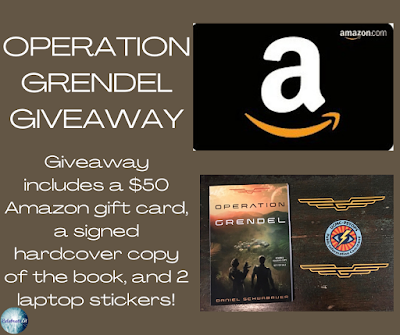 To celebrate his tour, Daniel is giving away the grand prize package of a $50 Amazon card, a signed copy of the hardcover first edition, and 2 laptop stickers!! (photo attached)

Operation Grendel is the first book I have read by Daniel Schwabauer. I am not a huge fan of reading the science fiction genre. I sometimes have a hard time keeping up with these types of novels but this one was easier to follow. There is a lot going on within the pages. There was adventure, action, mystery and suspense. It was far from being predictable and I never knew what would happen next. There were a few of twists that I did not see coming. Even though it is not my usual read, I did find it worth a reading and would be interested in more by this author.

I am giving Operation Grendel three stars. I would recommend it for readers who enjoy reading clean science fiction.

I received a paperback copy of Operation Grendel from the publisher. This review is one hundred percent my own honest opinion.