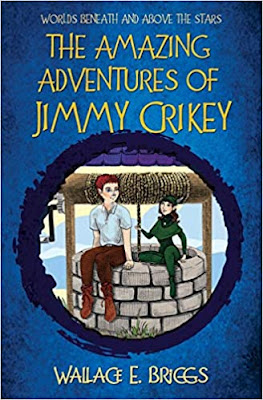 Do you want to know a secret?

Beneath the very ground on which you walk and beyond the stars above your head, are more worlds than you could ever dream of. There are monsters. Be afraid. Magic, wielded by witches and sorcerers. Epic adventures in worlds far across the ocean. And fearsome weapons which threaten to destroy everything.

Jimmy Crikey is a brave soul who faces some pretty scary challenges. Solving mysteries and averting mayhem, his incredible courage allows him to free up his abilities to shine and rise above every challenge in his path, on his way to discovering why he looks so very strange.

With a bright red mop of unruly hair, big blue eyes, a small snub nose, pointed ears and enormous feet, poor Jimmy is ridiculed by the neighbourhood children and runs away in search of a world where he fits in. Following a midnight flight through the forest, he stumbles into a lost, underground world called Roombelow and magic, adventure, danger and excitement await.

From the little lady who lives at the bottom of a well, a starship that wants to take him home, trolls, little people, traders and diamonite stealers to water sprites, witches, helpful dolphins, and interplanetary warfare, Jimmy learns the biggest lessons of his life.

My life as an Export Sales Manager was rarely as grand as it sounds. Ninety nine percent of my export sales trips consisted of taxi rides to airports, hours waiting in queues, a few hours flying, usually squeezed uncomfortably into the back of the plane and then more time spent in passport queues and baggage halls. Business Class (pure luxury by comparison) was only authorised for flights longer than five hours. Usually, it was then another taxi ride to the hotel, arranged by the company Travel Agent. Occasionally I was afforded the comfort of being picked up at the airport by a representative from an existing appointed distributor/agent.

There would usually follow meetings at the distributors’ offices, perhaps with staff training sessions, and end-customer/user visits which helped establish the status of the agent and perhaps assisted in the winning of some contracts. This could typically take one two or three days and often the programme allowed little if any free time for exploration of whichever county I was visiting. The exceptions were memorable, like the Salt Mine tour in Poland. The hotels I was assigned to were usually of a high standard and the quality of food excellent but it could be lonely existence as a stranger in a strange country, unless the distributor accompanied you for the evening.

The most memorable exception was a tour which included a five-day stint at an exhibition in Israel, followed by a three-day sales tour in Egypt with a newly appointed Distributor. The Egyptian part of the trip was planned so that I had a one day break from business in Cairo to visit the Museum and The Pyramids of Giza.

As I approached the hotel venue on last day of a tiring, slow-moving exhibition in Tel Aviv, the MD of the Distributor put a hand on my shoulder. “What are you doing here?” I looked at him in surprise. “Today is the last day of the Exhibition. I’m not due to fly out until tomorrow.”

“We can manage the stand today but you are not on duty. You are on a one-day trip to Jerusalem. See, here is your ticket and Ashmeil will take you to the tour pick up office and when you get back the company will provide transport to your hotel, where you will join us for dinner, as thanks for your work supporting us this week.”

I was dumfounded but graciously accepted the MD’s offer.

In general my, memory is atrocious but that day is burned indelibly into my grey cells.

Emotions ran high that day, and still. To visit the Holocaust memorial and the eternal flame left with me with a heavy heart about man’s inhumanity to fellow men. I visited Christ’s supposed birthplace at the site of the stable by the side of the Inn, now entombed within a church. I walked in the steps of the Lord as our group traced His last journey, carrying the cross, on foot Via del Rosa, the Way of the Cross. The streets were crowded but there was clearly marked Stations of the Cross, points at which Jesus had stumbled or rested.

At that time I was an avid believer. Perhaps less so now, but nothing will erase those memories of walking the crowded, narrow streets of Jerusalem, covering the same ground Jesus had walked on over two thousand years ago.

Then I was on my way to Cairo. And two days later I had set a day aside during my short trip to Egypt to visit the pyramids. Who would swap places with me?

As I said before: the best laid plans of mice and men...

From landing in Cairo the following afternoon, the new distributor had set up so many appointments that there was hardly time to eat, let alone to visit any tourist sites. As we ended the programme of industrial visits late afternoon on the last scheduled day of business, we headed back into the city and drove past the pyramids on our right-hand side. “You have seen before,” he said. “No?”

“That is not good,” the distributor said, and yanked his car across two streams of oncoming traffic amid a cacophony of blaring horns, and then sped back to the pyramids entrance. My heart rate must have doubled following that manoeuvre.

He drew up at the entrance gates which were in process of being locked. He jumped out of his car and there followed an intensive conversation with the Duty Guards. There followed much gesticulation amid raised voices and then, I swear, cash exchanged hands. The gates were opened and we were waved through. There followed awhat was almost a Grand Prix around the pyramids, at Grand Prix speede. At each pyramid we screeched to a halt in a cloud of dust and sand and I was ushered out of the car to take a photograph.

If I remember correctly, we completed a circuit of the pyramids in about ten minutes. I don’t remember the Sphynx and really, the rest is a blur across the pixels in my eyes.

And my photographic record is a disaster of poorly framed, out of focus shots on my manual 35mm camera. I was in touching distance of the great stones but never got to touch them.

But would I change a thing about that trip? Never! Of such stuff are lasting memories made. I was grateful for the opportunities that came my way, while doing a job I loved.

Posted by Amybooksy at 1:10 AM