READ AN EXCERPT.
Southern Minnesota, August 1862. Smoke fills the horizon and blood soaks the prairie as the Sioux fight to drive white settlers from their ancestral homeland. Sarah Wakefield and her young son and baby daughter are fleeing for their lives when two warriors capture them. One is Hapa, who intends to murder them. The other is Chaska, an old acquaintance who promises to protect the family. Chaska shelters them in his mother’s tepee, but with emotions running so high among both Indians and whites, the danger only intensifies. As she struggles to protect herself and those she loves, Sarah is forced to choose between doing what others expect of her and following her own deep beliefs.

"Chatlien’s mastery of the historical period—especially the life and culture of the Sioux—is notable and creates a fictional atmosphere of authenticity. A subtle dramatization of the conflict between white settlers and Native Americans in the 19th century." - Kirkus Reviews
"Richly detailed, Blood Moon is an intrepid tale of bravery and adventure in America's western frontiers. Perfect for fans of immersive historical fiction." - Stephanie Thornton, author of The Tiger Queens and The Conqueror's Wife
"An engrossing tale of struggle and justice-of friendship, mercy, and a rare, moving love. Ruth Hull Chatlien writes with great sensitivity and vivid yet subtle prose. Blood Moon is a must-read for fans of western novels, as well as women's historical fiction." -Libbie Hawker, author of Tidewater 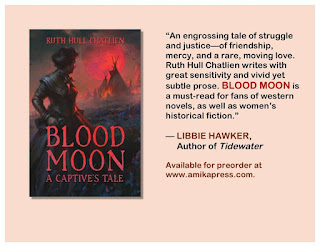 
I walk to the eastern window, hoping for fresh air and a glimpse of sky. When I went out to the privy before retiring, the moon was rising above the treetops—large and full, a glowing ivory orb that resembled a lustrous pearl nestled in black velvet. Its beauty made me glad to be living out here on the Minnesota prairie where we have such a fine view of the heavens.
Now, however, when I glance outside, only a thin crescent moon rides in the sky. My chest squeezes with dismay. How is this possible? Leaning out the open window, I notice that the interior curve of the crescent is blurry. Then I see the faint circular outline of a shadowy full moon against the black sky.
An eclipse.
I exhale in relief. I’ve read about lunar eclipses but never seen one. How wonderful to witness such an unusual event.
The shadow creeps so slowly across the face of the moon that its movement is impossible to discern, yet as the minutes pass, the area of darkness grows and the crescent shrinks to a glowing sliver. When Nellie falls back to sleep, I put her in her cradle but do not return to my own bed.
The heavens declare God’s glory, I think and wonder what our neighbors  make  of  this  celestial  event.  John  is  one  of  two  government- appointed physicians on the Sioux reservation in southern Minnesota, and Indian villages surround the Upper Sioux Agency where we live.
I doubt that the Indians have enough scientific learning to account for this phenomenon. No doubt their medicine men have an explanation, most likely one that will increase their hold over the poor, superstitious people.
The still-changing satellite mesmerizes me. At the very instant the last threadlike arc of light disappears, the moon turns the color of rust. The entire orb becomes visible once again, so that a red-orange disk dominates the sky. I clasp my hand over my mouth to keep from crying out. Shadowy areas pulsate across the surface. Sometimes the moon grows darker, but then the angry color reappears.
Is it the end of the world? Some warning phrase pokes at my memory, but I cannot call it to mind.

Ruth Hull Chatlien has been a writer and editor of educational materials for nearly thirty years, specializing in U.S. and world history. She is the author of Modern American Indian Leaders for middle-grade readers. Her award-winning first novel, The Ambitious Madame Bonaparte, portrays the tumultuous life of Elizabeth “Betsy” Patterson Bonaparte. Her latest novel, Blood Moon: A Captive’s Tale, is now available for pre-order. She lives in northeastern Illinois with her husband, Michael, and a very pampered dog named Smokey. When she’s not writing, she can usually be found gardening, knitting, drawing, painting, or watching football. For more information please visit Ruth's website. You can also connect with her on Facebook, Twitter, and Goodreads. Sign up for Ruth's newsletter here.

During the Blog Tour we will be giving away 5 copies of Blood Moon: A Captive's Tale and two $25 Amazon Gift Cards! To enter, please enter via the Gleam form below. Giveaway Rules – Giveaway ends at 11:59pm EST on September 8th. You must be 18 or older to enter. – Giveaway is open to residents in the US & Canada only. – Only one entry per household. – All giveaway entrants agree to be honest and not cheat the systems; any suspect of fraud is decided upon by blog/site owner and the sponsor, and entrants may be disqualified at our discretion. – Winner has 48 hours to claim prize or new winner is chosen. Blood Moon

Blood Moon: A Captive’s Tale is quite a captivating tale to read based on actual events. Because of the historical details, it is not an easy read at times. I thought Ruth Hull Chatlien was able to capture the historical events perfectly. She definitely did her research on Sarah Wakefield and her children being kidnapped by the Native Americans. I really enjoyed it and liked that the author added notes at the end to tell what really happened after the book ended. I was fascinated at times and even heartbroken at others.

I found Blood Moon: A Captive’s Tale to be a must read and would give it five plus stars.