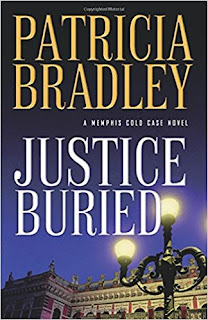 In an effort to get her security consulting business off the ground, Kelsey Allen has been spending a lot of time up in the air, rappelling down buildings and climbing through windows to show business owners their vulnerabilities to thieves. When she is hired to pose as a conservator at the Pink Palace Museum in order to test their security weaknesses after some artifacts go missing, she's ecstatic. But when her investigative focus turns from theft to murder, Kelsey knows she's out of her league--and possibly in the cross hairs. When blast-from-the-past Detective Brad Hollister is called in to investigate, Kelsey may find that he's the biggest security threat yet . . . to her heart.

Crackling with romantic tension and laced with intrigue, this suspenseful story from award-winning author Patricia Bradley will keep readers guessing--and looking over their shoulders.

Justice Buried is the second installment from Patricia Bradley’s Memphis Cold Case series. I have not read the first book in the series, so I believe can be read as a stand-alone. I did not feel like I was missing anything. However, I do plan to go back and read Justice Delayed in the near future.

I enjoyed Justice Buried. I thought the characters, Kelsey and Brad, were great. The plot is exciting, suspenseful, action packed, and romantic. It was hard to put the book down because I wanted to find out what would happen next.

I would give Justice Buried 4 ½ stars and highly recommend it.