Blog Tour: Guest Post, Reivew and Giveaway: Devil in the Dust: The Wind Carries More Than One Kind of Evil by Cara Luecht 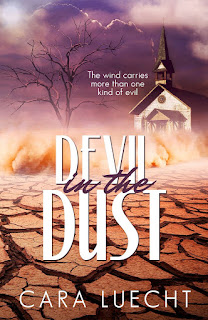 Their small Oklahoma town is dying. Lillian remembers how acres and acres of wheat once waved under jewel-blue skies. Now the dirt stretches across the flat land as far as she can see. Emma’s husband is missing. She keeps house, keeps her five children fed as best as she can, and keeps smiling as her hope fades. But when the days stretch to weeks, she faces the possibility that he will never come home. Left with the likelihood of losing their farm, and the ever-present pangs of hunger, she is forced to consider opportunities that, under normal circumstances, she would never contemplated. Jessie, Emma’s oldest daughter, completes her tasks as if numb. Forced to wear her mother’s shoes to avoid the humiliation of bare feet, she watches the dead, dirt road for signs of life. And then he comes. His new car and shiny shoes and generous way with gifts and money catch Jessie’s eye, much to the dismay of her mother … and much to the concern of the minister’s wife, Lillian. He’s too smooth, too willing to help, and much too eager to spend time with a girl less than half his age. But who is to say he is not the miracle they all prayed for? 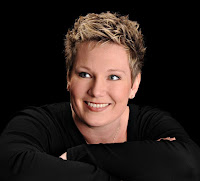 Why I wrote Devil in the Dust. One Sunday after church, we decided to go to lunch with another family. We hadn’t had the opportunity to get to know this couple well, but the conversation was amazing, we laughed until we almost cried, and I’m pretty sure the restaurant manager was glad to see us go. On the way out, the topic grew more serious, and I mentioned something that worried me. It was maybe a sentence—I was not baring my soul—but the woman with whom we had spent the last couple of delightful hours stopped, blinked, and put up her wall-of-a-Christian-smile. In an instant, I knew I had been judged as negative. You see, for many Christians, the mantras of “the battle is already won,” “faith will get you through,” and the largely American “pick yourself up by your bootstraps” have drowned out the quieter mandate to care. I went home chased by the feeling that, somehow, I didn’t measure up. And for a time, I dredged that place of overthinking, attempting to float a reason out of that murky pond where insecurity hides. Of course, I came up with nothing, and decided to put my efforts into deciding what my next novel would be. Unfortunately (or fortunately), at this stage, every little life experience has potential for use. While I had been undecided on theme, I knew I wanted the setting for the novel to be in the dustbowl in the 1930s. I began researching, and I realized the scope and human impact of this disaster was much larger than I had remembered from history class. More importantly, it lasted an entire decade. For a decade, people dealt with hunger and drought and death from breathing in the ultra-fine soot. Children were lost. Families abandoned their farms. People survived on rations of canned government meat…and that’s when they were lucky. Many felt cursed. Life was hard. I imagine that smiles were rare, even in the church. I started thinking about what it would take for a community to survive devastation on this scale. I considered the kind of people who make up a town: merchants, teachers, police, farmers, and ministers. And while merchants and teachers, along with everyone else, would feel the change brought on by the slow death of a drought, for a minister it would be different. A minister’s purpose is to bring people the good news of the gospel. Technically, their job would stay exactly the same, except every phrase they spoke would shift in meaning because the context—the lives of those sitting in the pews—had changed so dramatically. Growing up as the child of a pastor, I have some knowledge about how a minister’s home works. And in all my research I was left with one question: How could a minister preach every Sunday to a congregation of people who had lost everything with no hope for improvement anytime soon? I moved my research to the Bible, and when I did, I came across the story of Lazarus. I have heard and read this story countless times, but in the light of trying to puzzle out what a pastor might do in a situation where it looks like all has been lost, I realized something about the story that I had never considered. Before Jesus raised Lazarus from the dead, he cried with Lazarus’ sisters. He shared in their grief even though he knew it would end. He stayed there with them in that moment of sorrow. I came to the conclusion that during times of suffering, our responsibility to others should look nothing like that drought-of-a-Christian-smile that I met outside that restaurant. Rather, it should emulate Jesus’ example. When we make Christianity only about victory, and turn faith into a wish book, we strip it of its most powerful message: hope. Not eternal hope, but the hope of not being alone. More often than not, we lack the ability to change someone’s circumstances. What we can do is come up alongside someone and help carry their burden even if only for a few minutes. Christianity is not a way to avoid suffering, it’s about finding meaning through the suffering. I wrote Devil in the Dust as an exploration of what it means to be a Christian while standing in the midst of a desert. Told through the voices of three women who endure the quiet shame of poverty, Devil in the Dust is a story about what happens to faith when everything goes wrong. 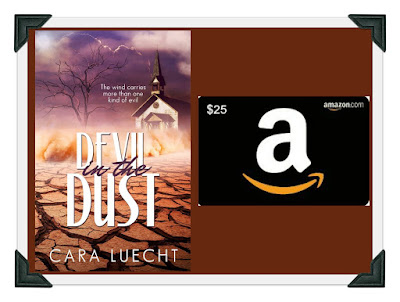 To celebrate her tour, Cara is giving away a $25 Amazon gift card and signed copy of Devil in the Dust!!
Click below to enter. Be sure to comment on this post before you enter to claim 9 extra entries!

Devil in the Dust: The Wind Carries More Than One Kind of Evil is a great read. I enjoyed everything about this story, including the historical part involving the Dust Bowl. It is obvious that the author, Cara Luecht did her research to write this well written story. I am not aware of this time in history and found it quite interesting. She did a great job bringing a reader back in time to experience what it was like back then, living in 1930s Oklahoma. I felt like I was right there within those pages and feeling the turmoil and emotions the characters were going through.

Devil in the Dust is a beautiful and touching story of learning how to survive and moving on, keeping faith and inspiration. I look forward to reading more books by Cara Luecht in the future. I would give this book 4 stars and recommend it.