Blog Tour: Review, Excerpt, and Giveaway: Set You Free: Love, Lies, and the Secrets That Bind by Elmer Seward 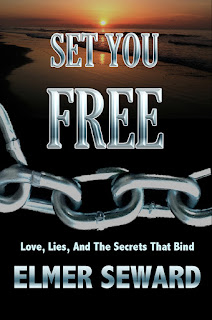 
Deena is running from a dangerous past.  When she finds herself in a small fishing village tucked away on the banks of the Chesapeake Bay, she thinks she is finally safe. While there, she discovers a journal that weaves a story of secrets, passion, and unrequited love.  In its pages, she discovers the answers to her struggle with the shadows of her own past.  In the end, those shadows close in on her and threaten all that she holds dear.

I am one of the walking dead. Not as lucky as those flesh-eating monsters that roam the earth eternally. No, my flesh-eating monster lives within. It roams at will, minute by minute. Consuming me from the inside. Stealing what little life is left. My monster? The Big C. Advanced stages. No treatment. What do you do when you’re a nobody from a little nowhere town who’s accomplished nothing and has no family? What do you do when you’re told to “put your affairs in order” and you have no affairs? What do you do when the sum and total of your legacy is secrets and lies?


I can still see it as if it were yesterday. Pastor Tompkins at the pulpit. A warm summer Sunday. A packed house of mostly drowsy parishioners. His fist hammered the pulpit. “And Jesus declared, ‘The truth will set you free.’” People amening and nodding in agreement. My father nodding, mostly from exhaustion. Church was his nap time. Pastor Tompkins wasn’t known for his stirring sermons, but all the thumping on the pulpit that day caught my dad and a few others between peace in God and peaceful sleep.


As a teenage boy, I didn’t spend much time listening in church. If Pastor Tompkins was right and God’s elect were “long-suffering,” I figured I had a special place in heaven just from sitting through his sermons. Usually I entertained myself by watching other people. There was Miss Jessup, an old spinster, who snuck romance novels into the service and read with the book hidden in the hymnal. Or Mr. Wilmar, a failed artist who now stocked shelves in the grocery store. He pretended to take notes during the services, his head nodding in agreement and his pencil moving quickly in his notebook. He sat in the pew in front of me and I would catch glimpses of his notes. He would sketch unflattering caricatures of the good pastor. Once in a while, they’d make brief appearances on the church bulletin board until they were discovered and removed. But during my senior year of high school, I mostly spent my time studying the profile of a sixteen-year-old girl who sat with her father two rows up and across the aisle. She had soft flowing curls that cascaded over her shoulders and glowed in the sunlight that streamed through the stained-glass windows. Sometimes she’d glance back and catch me watching. When she did, I’d snap my attention to the pulpit and pretend to be listening. I hoped she didn’t notice the color rising in my face. Her first day in church, her father caught her glancing toward me. There in church, I saw her wilt in the heat of his glare.


That’s why I remember that particular sermon. It was the irony of it all. Truth, lies, and secrets. In a small town, there are only two types of secrets: the ones everybody knows and the ones everybody will soon know. The not-too-well-kept secret was that her daddy was a mean drunk. The adults all knew it, and it wasn’t long before I knew it too. I still cringe at what that glare would mean for her. 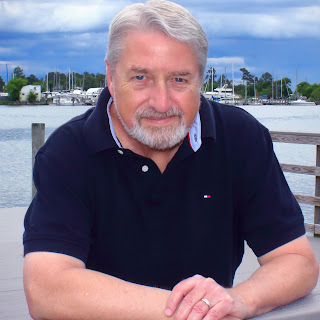 Elmer Seward was born and raised along the Chesapeake Bay in southeast Virginia.  Growing up, the cemetery behind his house was his playground.  The metaphorical theme of death and rebirth that figures prominently in his novels is probably influenced in some way by the time that his mother heard, through the screened window, a small voice crying for help.  Rushing from the house and through the yard, she discovered her all-too-curious six-year-old son at the bottom of a freshly dug grave.  In that moment, he discovered that trouble is much easier to get into than it is to get out of.  Sometimes we need help getting out of the hole that we jump into willingly.


He is blessed to have a large blended family and is the reluctant servant of three crazy dogs, a Maltese, a Japanese Chin, and a BruMaltChiYorkie.  All of these strongly influence the characters and events in his novels; however, his beautiful wife, Mitzi, is the true inspiration for the tender hearted but determined women in his stories.


Set You Free is Elmer’s third novel. His previous novels are Hearts in the Storm and Dreams of the Sleepless.


Elmer Seward will be awarding a $15 Amazon/BN GC to a randomly drawn winner via rafflecopter during the tour.

October 9:
Inside The Mind of an Avid Reader
October 16:
Stormy Nights Reviewing and Bloggin'
October 16:
Why I Read
October 23:
Natural Bri
Sharing Links and Wisdom
October 30:
Locks, Hooks and Books
The Reading Addict

Set You Free: Love, Lies and the Secrets that Bind is a gripping story. I felt a connection to Deena from the start. I understood her struggles and her having to deal with the past. There were some mystery and suspense element to the story, which made me wonder what would happen next. There are parts that were hard to read at times, as it deals with heavy issues. This is not a light read.

I thought Set You Free: Love, Lies and the Secrets that Bind was a really good book and believe it is a must read. I give it a full five stars.