Review: The Delusion: We All Have Our Demons by Laura Gallier 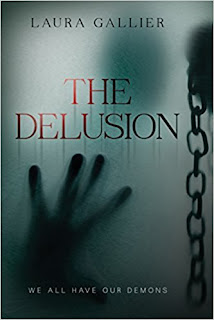 By March of Owen Edmonds’s senior year, eleven students at Masonville High School have committed suicide. Amid the media frenzy and chaos, Owen tries to remain levelheaded―until he endures his own near-death experience and wakes to a distressing new reality.

The people around him suddenly appear to be shackled and enslaved.

Owen frantically seeks a cure for what he thinks are crazed hallucinations, but his delusions become even more sinister. An army of hideous, towering beings, unseen by anyone but Owen, are preying on his girlfriend and classmates, provoking them to self-destruction.

Owen eventually arrives at a mind-bending conclusion: he’s not imagining the evil―everyone else is blind to its reality. He must warn and rescue those he loves . . . but this proves to be no simple mission. Will he be able to convince anyone to believe him before it’s too late?

Owen’s heart-pounding journey through truth and delusion will force him to reconsider everything he believes. He both longs for and fears the answers to questions that are quickly becoming too dangerous to ignore.

The Delusion: We All Have Our Demons: is quite different from my normal read. In the beginning, I was not sure how I was going to like it. Well, now that I have finished it, I can honestly say this is an awesome read. I could not put it down because I wanted to find out what would happen with Owen next. I was so disappointed when I came to the end but excited to know that the story continues in book 2. I cannot wait for its release.

I highly recommend this book!