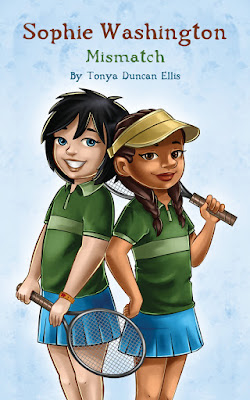 Sophie Washington is trying out for the tennis team, and she’s excited to get a chance to play with her good friends Chloe and Mariama. That is until wacky Coach Quackenbush matches her with school misfit, Mackenzie “Big Mac” Clark, and things quickly go downhill. Sophie has nothing in common with her partner, who does odd things like run off the court in the middle of practice, and she’s disappointed when Mackenzie shows no interest in the secret handshake she made up. After getting called out by the coach, being hit on the head with a tennis ball, and jokingly called the “most valuable player,” by mean older girls on the team, when she’s clearly not, Sophie’s ready to throw in the towel. Trying to fit in with the mean girls by making fun of Mackenzie behind her back makes things worse. Mackenzie starts skipping practice, and then gets sick at school, and Sophie realizes that there’s more to her doubles partner than meets the eye. What started out as a total mismatch could be the best partnership of all.

NOTE: The book is on sale for $2.99 or FREE on Kindle Unlimited.

Mackenzie and I get whopped by Mariama and Chloe, 40-Love, which in tennis terms means 40 to zero. I wonder why the inventors of tennis named a goose egg a word of affection. It should be 40-Nada, or 40-Zilch. I feel like I’m 40-Nothing as I wave goodbye to my friends and Mackenzie, pick up my backpack and racket and trudge to the parking area to wait for Mom. So far, playing tennis is the pits. The older girls are snobby, my partner doesn’t talk to me, and now I’m becoming the team joke.

“You should have seen that ball bounce off Sophie’s head!” I hear Nathan and Toby telling Carlton and Carly Gibson on the other end of the car pool area. “She’s the team MVP!”

I turn my back and ignore them.

Thank goodness Valentina didn’t have her cell phone out or the whole school would know. She loves to take selfies and other pictures with her phone camera and post them to social media. With my luck it would have gone viral.

“How was your day, sweetie?” asks my mother after she pulls up to get me.

It’s a good thing Cole isn’t in the car. The last thing I need to deal with is his teasing, or worse yet, listen to his lame jokes.

The one he had this morning was the worst.

“Where did tennis players go on their date? The Tennis Ball!”

“Your father picked him up early to go to a Houston Rockets basketball game downtown,” she says. “A doctor in his office building has season tickets and couldn’t make it this evening, so it’s just us girls.”

Things are looking up. I love to have girl time with my mom. She takes me out to my favorite places to eat for burgers or pizza, and sometimes we watch a movie Dad and Cole can’t stand, like the Princess Diaries. Of course, it’s too late for us to hang out as we would on a weekend afternoon, but I’ll settle for eating out. That’ll be the perfect pick-me-up after that terrible tennis practice.

But Mom deflates my hopes quicker than a popped helium balloon.

Tonya Duncan Ellis is the author of the Amazon bestselling, Readers' Favorite "Five Star" rated, Sophie Washington children's books series, geared toward readers ages 8 to 12, and is a member of the Society of Children's Book Writers and Illustrators (SCBWI). She has received awards for literary excellence, worked as a journalist and freelance magazine writer, and is a graduate of Centre College of Kentucky and Washington University in St. Louis.

The Sophie Washington book series recounts the adventures of a precocious African American preteen from Houston, TX and her diverse group of friends. Each funny and heartwarming story teaches lessons about friendship, responsibility, truthfulness and perseverance. Books in the series include Queen of the Bee, The Snitch, Things You Didn't Know About Sophie, The Gamer, Hurricane, Mission: Costa Rica,
Secret Santa, Code One and Mismatch.

Tonya loves to travel and has visited 49 American states and three continents, but some of her best journeys have been between the pages of a novel. As a girl she could always be found with a book in her hand, and reading is still one of her favorite hobbies. When she's not reading or writing, the author likes to ride her bike, swim, and spend time with her husband and three children. She lives in Missouri City, TX.

Tonya Duncan Ellis will be awarding a $25 Amazon or Barnes and Noble GC to a randomly drawn winner via rafflecopter during the tour.

It was great catching up again with Sophie Washington in Mismatch. I love the Sophie Washington series and this one was a great addition to it. My ten year old daughter loves Sophie and I think she is good influence for her. Sophie learns some valuable lessons that all readers can learn from.

I am giving Sophie Washington: Mismatch a well deserved five plus stars. I highly recommend it for all readers, young and old.