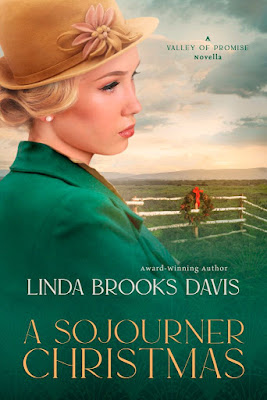 She relinquished her childhood home. Abandoned her former life. And set off for a faraway valley that’s touted as magical. As an aspiring newspaper reporter, Blossom Evans expects to find plenty of material with which to carve out a career.

But alarming tales about the Lower Rio Grande Valley of Texas abound. Barely tamed, rugged brush land. Mexican bandits. Wildcats, rattlesnakes, and tarantulas as big around as dinner plates. Where will she find the courage to face—and overcome—such foes, even for her dream career?

The first hint of an answer lies in the sleepy little West Texas town of Winters. An unexpected conflict is brewing, one that could launch a reporter’s career—or crush it before it begins. How will Blossom be lured into the fray? And where will she find the temerity to confront this particular brand of evil? It’s Christmas Eve 1923, and Blossom Evans is about to discover what’s she made of. 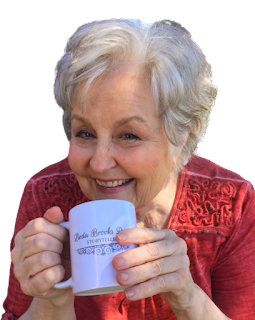 Linda Brooks Davis was born and reared on a farm in Raymondville, a small Rio Grande Valley community in the southernmost tip of Texas. She retired in 2008 after forty years as a special educator and administrator and now writes inspirational historical fiction from her home in San Antonio, Texas. Readers may contact Linda through her website, www.lindabrooksdavis.com.

Something to Write Home About

“People don’t come better than the Pyles,” my mother would often say about her mother Ella’s family. And I believed her.

Years ago—1967 to be exact—Mother finally convinced me to put pen to paper and tell the Pyle family tale about their winter of 1923-24 migration from central Oklahoma to the southernmost tip of Texas. In covered wagons. The process turned me into a family history buff.

My mother was our family’s “keeper,” and she passed the moniker to me. Fortunately, I now share her interest in our Pyle ancestors’ backstories. I delight in finding treasures—photos, stories, anecdotes, and documents—from our family tree.

At the present time, I’m going through trunks, bins, and boxes of family mementos that extend into the nineteenth century and even further. Each item sparks dreams of what forebearers’ lives truly might have been. What were their secret longings and loves? What dreams did they withhold from others? What tragedies did they endure, and how did they survive them?

One Pyle dream that became reality was migrating from central Oklahoma to the Lower Rio Grande Valley in the southernmost tip of Texas. They had heard stories about soil so fertile and climate so ideal that the area was called the Magic Valley.

Land developers in the Valley were as busy as bees in citrus orchards, doing all they could to convince folks in the Midwest to buy land in the Texas Magic Valley, and the newcomers came. Among them, my mother’s Pyle clan. In the deep winter of 1923-24, the Pyles sold their land and belongings and acquired 8 covered wagons and the horses to pull them. On December 17, 1923, they headed southward toward their dreams.

On Christmas Eve a week later, the family arrived in Winters, Texas, a windswept community south of Abilene in West Texas where ranchers and farmers populated the countryside. Since the advent of the train and automobile, cross-country travel in covered wagons had become an oddity. And the Pyles did feel a bit odd—especially when someone mistook them for Gypsies and bought the Pyle children Christmas presents.

Fast-forward sixty years. My mother possessed a crusader streak and rarely hesitated before acting on it. Fifty years after the wagon trail adventure, she acted—without hesitation—when a young farm worker told her someone was involved in the drug trade on her land.

Soon she knew the sound of the engine and general description of the car that crept down the dirt road past our house in the dark of night for no apparent reason. Mother, the Super Sleuth, wanted to share the make and license number with the local police, so she and the young farm worker devised a plan.

On the appointed night, the same car inched past our house, around the corner of an adjoining twenty-acre parcel. Mother and her partner headed, stooped and trembling, across a dark field of cotton toward the now distant red taillights of the suspicious car.

“I need to get close enough to find the make of the car and the license number,” Mother said as she drew near the car, which had stopped in the middle of the dirt road. As she raised up, another set of headlights flashed down the road, and she flopped onto the dirt cotton row. But the second set of headlights brightened their hiding place like the noonday sun.

“Follow me,” Super Sleuth whisper-shouted to her compadre. Both tumbled into a drainage ditch that separated the field from the road. Out of sight—but terrifyingly near danger—the pair dug their fingers into the damp soil and pressed their faces into the slimy growth, praying no one would see them. And that no creepy creature would attack.

Several men, some blinding white in the lights and others black as tar in the shadows, met in the space between the two idling cars and made their exchange. Mother peeked above a prickly weed and caught the makes of both vehicles. And she and her partner memorized partial plate numbers.

Thankfully, the drug dealers went their separate ways, leaving Super Sleuth and her partner to make their way back home. In the pitch-black night. Across acres of growth that snatched at their cotton skirts. Amid clusters of swarming insects. And through strips of undeveloped land that harbored rattlesnakes.

Trembling from the adrenalin surge but armed with tidbits of important information, the two piled into Mother’s car and raced to the Sheriff’s Office. She submitted a report about the incident, complete with the cars’ identifying details, and returned home so grateful not to have been discovered that she fell into a deep sleep.

I drew upon these memories for the writing of A Sojourner Christmas. The McFarland clan does, indeed, set out across country in a team of covered wagons as my Pyle relations did. And they pull into Winters, Texas on the twenty-fourth of December 1923, just as my Pyle forebearers did. They were mistaken for Gypsies and were surprised with Christmas presents from the townsfolk, as are the McFarlands.

While in Winters, Blossom Evans entangles herself in a dangerous affair, one that my Super Sleuth mother would have joined if she could. I can imagine Mother and Blossom heading out across a windswept field in pursuit of bootleggers in 1923. Or drug dealers in 1983. Or …

I hope A Sojourner Christmas meets Mother’s heavenly approval. I hope the same for readers.

For Him and My Family, July 25

She Lives To Read, August 1 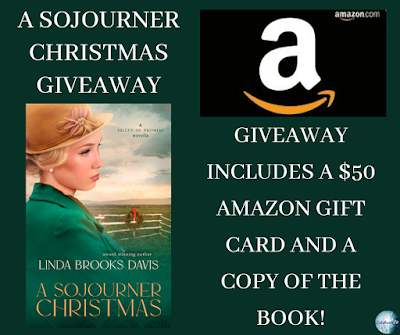 To celebrate her tour, Linda is giving away the grand prize of a $50 Amazon gift card and a copy of the book!!

I had the pleasure and enjoyed reading the first book from Linda Brooks Davis’s Valley of Promise series, Soon the Dawn. I was excited to have the opportunity to read the next book, A Sojourner Christmas. I think I enjoyed reading this one even more. I thought it was a really good read. I admired Blossom’s bravery and courage. I liked being transported back in time to 1920s Texas town of Winters during Christmas time. It is a short read and can be easily read in one sitting. I loved it.

I am giving A Sojourner Christmas four and a half stars. I recommend it for readers who enjoy reading clean and sweet historical fiction set during the most magical time of the year. I look forward to reading the next installment from the Valley of Promise series.

I received a paperback copy of A Sojourner Christmas from the publisher. This review is one hundred percent my own honest opinion.