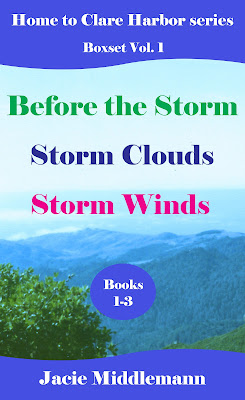 A devoted granddaughter willing to do whatever it takes to keep everyone safe.  Strangers who meet during the worst of conditions and become friends in the midst of chaos.  Unexpected romance under the most unlikely circumstances.  A puzzling mystery with its roots in historical events that took place centuries ago. And a storm that hides an ominous purpose that could change all their lives forever.

Sara knows before she walks into her grandparent’s home that her grandmother’s greatest fear will never be the storm or the threat it poses but instead the unknown that lays just beyond her front door. She knows too its cause and grieves that there is nothing she can do to change it.

Throughout the years of his career John has covered numerous battlefields including those that are a result of nature’s unyielding tempest.  He fears this might be the worst one yet.

Mel didn’t expect to spend more than a few days in the large house where they’d taken refuge.  She figured the storm would pass by and then they’d be off to their next assignment.  The last thing she expected was David Payne.

Despite the fact that Lance was the bane of her teenage years, Tish knows that without the help of her father’s assistant, that the trip to North Carolina likely would have been a lot more challenging than it was. She’d been unequivocally terrified but his presence gave her strength she didn’t realize she had.  She wasn’t certain how she felt about that…or him…or that he no longer irritated her the way he used to.

When Gary arrived at his family’s home in the mountains of North Carolina, he’s relieved that Sara and her grandparents along with their elderly friends are already there. But he is unable to take an easy breath until Tish finally arrives with Lance…and is not at all surprised at what he hears from Lance about their trip and the potential dangers they’d just barely been able to avoid.

He’s determined to do everything he can to keep their location safe…and unknown. Their knowledge, skills, and ingenuity are their greatest defense. For a time they would have to depend on themselves…it hadn’t take long to discover that the storm was never their greatest threat…but what is could change all their lives for the immediate future…or longer.

If you enjoy uplifting and heartfelt women’s fiction, young and older heroes and heroines filled with courage and compassion as they share joys and triumphs, and united they face and overcome tremendous challenges and tragedy, this book is for you.

“No one could ever accuse you of being foolish, Grandma,” Sara said meaning every word.  “We’re in a scary situation that none of us have ever been in before.  You’d be far more foolish if you claimed it didn’t bother you.”

“It’s not just the storm,” Maisie admitted slowly but she kept her eyes steady on those of the young woman sitting next to her.

“Tell me, Grandma,” Sara asked softly.  She knew sometimes if her grandmother was able to give voice to her fears it helped to diminish them.

Lord only knew that she’d talked with enough professionals to learn ways that could successfully help her grandmother to cope with the many fears that too often held her in their grip.  She knew at the moment the primary one came from not being in familiar surroundings…not being in her own her home.  Everything else was peripheral to that.

But at the moment there was little she could do to remedy the greatest of her fears.

The trembling voice that was filled with so much more than just fear broke Sara’s heart.  She knew it was the exact same fear of so many others who were her grandmother’s age.

“Oh, Grandma.” She wrapped her arms around the frail shoulders that had once been so strong and sturdy.  They had been her buffer against the world for so many years during her childhood and all the years after.  She could do no less for her now.

Jacie Middlemann lives in Texas with her husband and a couple of cats who believe they rule…and sometimes they do.

When she’s not watching classic sitcoms or working on a needlework project for one of her kids, she loves to read women’s fiction and sometimes a good mystery suspense.

Jacie Middlemann will be awarding a $50 Amazon/BN GC to a randomly drawn winner via rafflecopter during the tour.