Jacques Forêt, a former gendarme turned investigator, delves into the murky world of commercial sabotage – a place where people lie and misrepresent, and where information is traded and used as a threat. The Vaux organisation is losing contracts and money, and Jacques is asked to undertake an internal investigation. As he works through the complexity of all the evidence, he finds more than he bargained for, and his own life is threatened. When a body of a woman is found, it appears to be suicide. But as the investigation takes another turn, Jacques suspects there is more to it. Who is behind it all…and why? Will Jacques find the answer before another person ends up dead?

Angela Wren I’m an actor and director at a small theatre a few miles from where I live in Yorkshire in the UK. I did work as a project and business change manager – very pressured and very demanding – but I managed to escape and now I write books. I’ve always loved stories and story telling so it seemed a natural progression, to me, to try my hand at writing. My first published story was in an anthology, which was put together by the magazine ‘Ireland’s Own’ and published in 2011. I particularly enjoy the challenge of plotting and planning different genres of work. My short stories vary between contemporary romance, memoir, mystery and historical. I also write comic flash-fiction and have drafted two one-act plays that have been recorded for local radio. My full-length stories are set in France where I like to spend as much time as possible each year.

EXCERPT
“I want an explanation, and none of you are leaving here until I get one.” Jacques, unshaven from having being woken so early, and dressed in a pair of creased jeans and a jumper, paced back and forth in the bar as he waited for someone to respond. “This find has to be called in. There is no question of that. But you will have to explain what you were doing up in the north pastures at four in the morning. It’s a very odd time to be mending fences, Rouselle.” His tone hardened. “What were you doing?” He stopped and looked each one of the men in the eye in turn. “Rouselle?” he prompted.
Rouselle shifted in his chair and looked away. Gaston and Pamier glanced at each other but said nothing.
“Right.” Jacques pulled out his phone. “You leave me no option, and the charges I will be suggesting to my old colleagues in Mende will be trespass, concealment of a body and obstruction of a police investigation. I’m sure I can think of a couple more, but those will suffice for now.” He began to dial.
“Tell him, Rouselle.” It was Gaston who broke the silence. “Damn well tell him, man.”
Jacques pulled up a chair from a nearby table, pulled his notebook from the back pocket of his jeans and sat down. “Any chance of some coffee?”
“Of course,” said Gaston. He got up and moved behind the bar.
“It’s not trespass, Jacques.” Rouselle blustered. “I was taking back what was mine.” He sat upright, his hands placed on his thighs, defiance in his eyes. “I was taking back my land.”
“And do you have documentary proof of where the boundary between your land and Delacroix’s actually sits?”
“Yes!”
“So, if I was to ask for those documents so that I could pass them on to a surveyor, he will be able to tell me that your new fence is in exactly the right place. Is that correct?” Jacques watched the farmer’s face as a smidgen of colour suffused his cheeks.
“I’m just a simple farming man, Jacques,” he said, his tone more moderate and respectful. “I understand cattle and the land. How do I know what a surveyor will find?” He shrugged off his evident lie.
Jacques tapped his notebook with his pen. “And why did this…reclaim of your land have to be undertaken now? It’s 4.37am; it’s still dark. Moving fences is not the sort of job that I would normally expect to be done at this time in the morning.” He accepted the coffee that Gaston handed to him and sat back in his chair, left ankle resting on his knee.
“I’ve a very busy day today and I wanted to get the job done and out of the way early.” Rouselle placed the coffee he was handed on the table next to him.
“I see. You have such a busy day today that you can afford to keep lying to me, can you? No-one is leaving until I get to the truth, Fermier Rouselle. The whole truth.”

Entry-Form
Visit each blogger on the tour: tweeting about the giveaway everyday of the Tour will give you 5 extra entries each time! [just follow the directions on the entry-form]
Global giveaway open to all 5 winners

CLICK ON THE BANNER TO READ REVIEWS, EXCERPTS, AND INTERVIEW 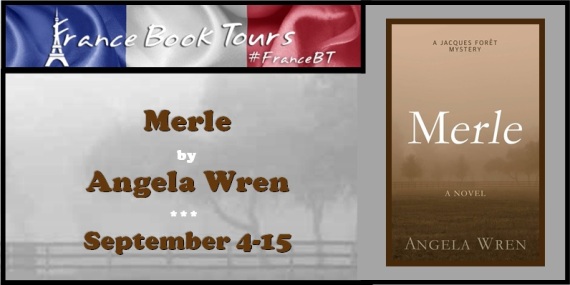 Merle is the second book from Angela Wren's series, A Jacques Forêt Mystery. I have not read the first book in the series but did not feel lost or as if I was missing anything. I do hope to one day go back to read it soon.

I found Merle to be a good read. I love the beautiful French setting. Jacques Forêt is a fun investigator and a likable character. He finds himself in a story that is full of mystery and suspense. I never knew what was going to happen next with him. There were so many twists and turns. I was intrigued and had a hard time putting the book down.

I most definitely believe this book to be a must read and I would give Merle four and a half stars. I look forward to more of this series and by Angela Wren in the future. I have become a new fan of her work.