Blurb Blitz and Giveaway: Lie to Her by Mehrisa Mex

This post is part of a virtual book tour organized by Goddess Fish Promotions. Mehrisa Mex will be awarding a $10 Amazon or Barnes and Noble GC to a randomly drawn winner via rafflecopter during the tour. Click on the tour banner to see the other stops on the tour. 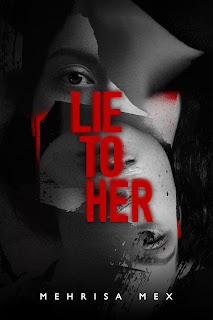 Despite years of treatment, twenty-one year old Lydia still struggles with trauma from being attacked as a teenager. House-bound with anxieties and haunted by ghostly visions, she soon comes to suspect her psychiatrist husband, Myles, of sabotaging her recovery.

Her pursuit of the truth uncovers secrets more terrible than she ever imagined and it soon becomes clear that nothing is as it seems and no one can be trusted – not even herself.

The room was spinning and she realized in surprise that she was on her feet in the kitchen. She looked around in a panic. What was she doing there?

The time on the microwave read 2.23am. She looked down at her hands and found them smeared with blood. Her breath knotted up in her throat. She staggered to the kitchen sink and washed the blood off her hands. Her face felt wet and she reached up to touch it. More blood.

She rushed to the bathroom and, in the mirror, she found a streak of blood going down her face. She washed it off, and found the source - a cut in her hair line. It was only then, when she tried to calm herself a bit, that the pain at the site of the injury grew into her awareness.

With her heart thumping in her ears, she thought of the video Myles had shown her where she had tried to stab him with a knife. She hurried out the bathroom to Joanie who raised her head as Lydia crouched down beside her. She didn't seem to be hurt or afraid of her, but Lydia ran her hands over her body anyway to make sure she wasn't injured and bleeding. She wasn't. She was fine.

Lydia looked up at Zach's bedroom door. She had no recollection of trying to harm Myles, but there was clear proof that she had. Had she also tried to do something to Zach?

She didn't know how she had cut herself, but the blood on her hands may not have been all hers.

About the Author: Mehrisa Mex writes mystery-thrillers, neo-noir and international crime. She often appears in her own imagination lit in the chiaroscuro style of film noir and narrating thoughts to herself in moody, hard-boiled tones.