Review: A Most Noble Neir by Susan Anne Mason 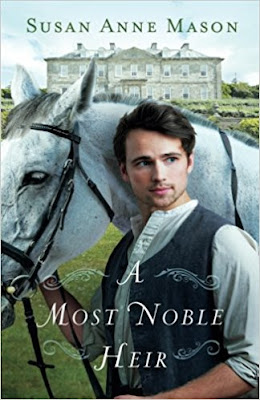 When stable hand Nolan Price learns from his dying mother that he is actually the son of the Earl of Stainsby, his plans for a future with kitchen maid Hannah Burnham are shattered. Once he is officially acknowledged as the earl's heir, Nolan will be forbidden to marry beneath his station.Unwilling to give up the girl he loves, he devises a plan to elope--believing that once their marriage is sanctioned by God, Lord Stainsby will be forced to accept their union. However, as Nolan struggles to learn the ways of the aristocracy, he finds himself caught between pleasing Hannah and living up to his father's demanding expectations.At every turn, forces work to keep the couple apart, and a solution to remain together seems further and further away. With Nolan's new life pulling him irrevocably away from the woman he loves, it seems only a miracle will bring them back together.

A Most Noble Heir is a wonderful piece of historical fiction. I love love love Nolan. He is one of those characters that a reader wants to root for all the way to the end. The story has some great elements to it, that includes, action, adventure, mystery, suspense, and danger. I had no way of predicting how it was going to end, which makes a perfect page turner for me.

I highly recommend A Most Noble Heir and give it a well-deserved 5+ stars.