Review Tour and Giveaway: Gore in the Garden by Colleen J Shogan

Gore in the Garden
by Colleen J. Shogan 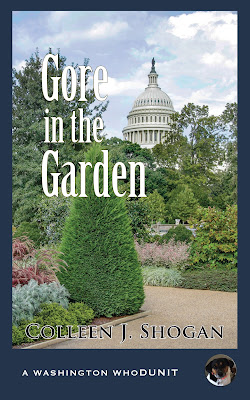 After her boss narrowly escaped political defeat, Kit Marshall is settling into life as a busy congressional staffer. While attending an evening reception at the United States Botanic Garden, Kit’s best friend stumbles upon the body of a high-ranking government official. The chairwoman of a congressional committee asks Kit to investigate, and she finds herself once again in the thick of a murder investigation. The complications keep coming with the unexpected arrival of Kit’s younger brother Sebastian, a hippie protestor who seems more concerned about corporate greed than the professional problems he causes for his sister. To make matters even worse, the romantic lives of Kit’s closest friends are driving her crazy, diverting her attention from the mystery she’s been tasked to solve. The search for the killer requires her to tussle with an investigative journalist right out of a noir novel, a congresswoman fixated on getting a statue of James Madison installed on the Capitol grounds, and a bossy botanist who would do anything to protect the plants he loves. When the murderer sends a threatening message to Kit via a highly unusual delivery mechanism, Kit knows she must find the killer or risk the lives of her friends and loved ones.

“So, why are we going to a garden to drink beer tonight, Kit? Has Doug’s trust fund dried up?” Sebastian gave me a playful punch on the arm to let me know he was yanking my chain.

I sighed for the umpteenth time before responding. “It’s my job, Sebastian. I’m the chief of staff for a member of the House of Representatives. She’s been assigned to a relatively obscure committee called House Administration. It oversees the legislative branch agencies and the Capitol Grounds.”

Sebastian considered my answer for a few moments before speaking. The snide tone was gone. “That’s actually kind of cool. So, your boss helps run Congress?”

“Partially. The Speaker appointed her to this committee because she’s smart and asks intelligent questions. The nice part about the assignment is that she gets invited to the best events on Capitol Hill. Like tonight.”

We’d just driven past the Washington Monument, on our way due east toward the Botanic Garden, which was situated at the base of the Hill between the Hirshhorn Museum and the Capitol Building.

“Why is tonight so special again? There’s a special flower you want me to see?”

I punched his arm playfully. “Trust me, Sebastian. Aren’t you a fan of the Earth and everything natural? You’ll be right at home at the Botanic Garden,” I said. “But you’re right. You’ll see something amazing at the reception this evening.”

He cleared his throat. “And what exactly is this awe-inspiring specimen of the plant kingdom?” 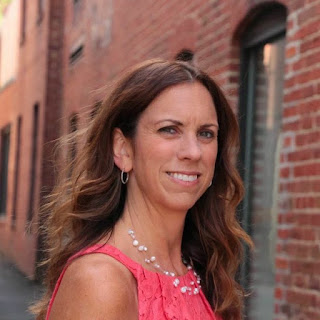 Colleen J. Shogan has been reading mysteries since the age of six. She conceived of the plot of her first novel one morning while taking a walk in her suburban Washington, D.C. neighborhood. A political scientist by training, Colleen has taught American politics at numerous universities. She previously worked on Capitol Hill as a legislative staffer in the United States Senate. She’s currently a senior executive at the Library of Congress.
Colleen lives in Arlington, Virginia with her husband Rob and their beagle mutt Conan. She is a member of Sisters in Crime. "Stabbing in the Senate" was awarded the Next Generation Indie prize for Best Mystery in 2016. "Homicide in the House" was a 2017 finalist for the RONE Award for Best Mystery. “Calamity at the Continental Club” was a 2018 finalist in the “best cozy mystery” at Killer Nashville.

Colleen J. Shogan will be awarding a $50 Amazon/BN GC to a randomly drawn winner via rafflecopter during the tour.

Gore in the Garden is my first experience with Colleen J. Shogan’s writing. I believe this fifth installment from the Washington Whodunit series can be read as a stand alone. I was able to jump right in and read it without feeling as though I have missed some information that was in the previous books. I thought this was a great and fun read. I found myself giggling at times and I was enthralled in the mystery. I was definitely surprised at the “whodunit”.

I give Gore in the Garden five plus stars. I would love to read the other books from the Washington Whodunit series. I look forward to more by Colleen J Shogan in the future.