Excerpt Tour and Giveaway: Return of the Fox by Pamela Gibson

Return of the Fox
by Pamela Gibson 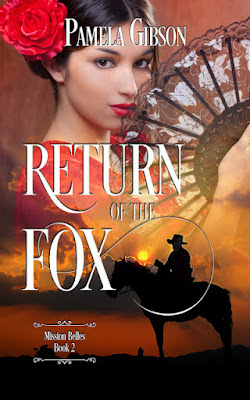 ~~~~~~~~~~~~~
GENRE: Historical Romance
~~~~~~~~~~~~~
BLURB:
The year is 1847...
… Gabriel de la Vega, disgraced son of a Mexican ranchero, returns to his Alta California home when Americans take power to help his countrymen with the bewildering transition and make amends to the woman he once wronged.
Fiercely independent, Isabella Fuentes swore she’d never forgive Gabriel for abandoning her on the night they were to elope. Now he’s back, playing a dangerous game, pretending to be meek and repentant when she knows the handsome, former outlaw is anything but contrite.
When a series of accidents threaten Isabella’s safety, Gabriel offers an outrageous solution: the protection of a brief civil marriage. Isabella is tempted. But can she rely on a man who once betrayed her and can she trust her foolish heart to let him go when the danger has passed?
~~~~~~~~~~~~~
EXCERPT:
Screams filled the air as the bull lunged at the fence, loosening the  boards that crashed to the ground with the animal’s weight. Isabella couldn’t move. Blood gushed from the bull’s nose, and he kept moving toward her. Too late she realized the long scarf she wore around her neck fluttered like a flag in the wind, attracting the bull’s attention as surely as a matador’s cape.
Fear gripped her body and froze her legs as the animal ran toward her.
Just as the charging bull reached her, a strong arm scooped her up and carried her out of the animal’s line of sight. She landed on the ground, a heavy weight on top of her. Afraid to open her eyes, she lay still.
She couldn’t breathe.
But she was alive.
A low voice murmured in her ear. “You need a keeper, querida. What were you doing so close to the ring? I thought I saw you safely seated on the hill with the others.”
She opened her eyes and stared up into Gabriel’s face. Tears leaked out of the corners of her eyes, trickling back into her ears. “The bull,” she whispered. “Where is it?”
“It’s being chased by our host’s competent vaqueros and will be lassoed and safely confined.” He moved off her and sat back. “Are you hurt? Can you get up?”
She took in a deep breath and started to shake. “I am making a spectacle of myself, aren’t I?”
“Indeed you are.” His smile was gentle and comforting.
She took in more air, and bit hard on her lower lip. “I think I can get up now.”
“Good, because here comes your admirer.”
Christopher fell to his knees beside her on the ground, chafing her wrist. “Isabella, my God! I thought you were right behind me.”
“I wandered back a bit . . . to get a better view.”
“Let me carry you to the house.”
“No. I’m fine. Just help me up.”
He lifted her carefully, bringing her to her feet. She wondered where Gabriel had gone, but soon a crowd gathered around her. Sorina took her other arm, and they walked past corrals and barns and into the courtyard of the hacienda. Seating her on a sofa, Sorina shooed the men away.
“What happened? I thought you and Captain Sutherland were on the hill with the other spectators.”
“He wanted to get closer to the bull game, and I accompanied him.”
“You gave us all such a fright. Good thing Uncle Gabriel spotted you. He took off running before anyone else and pushed you out of the way. Whatever made you move that close?”
“I . . . I wasn’t thinking.”
“I’m so glad you weren’t hurt. Stay here, and I’ll find someone to bring you a cup of tea. Unless you’d prefer brandy.”
At the moment, she was more interested in the man who had landed on top of her, shielding her body from harm.
He was nowhere to be seen. 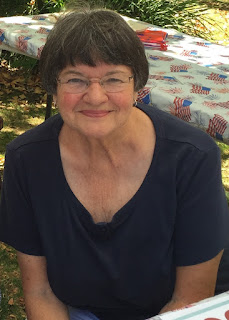 Author of eight books on California history and thirteen romance novels, Pamela Gibson is a former City Manager who lives in the Nevada desert. Having spent the last three years messing about in boats, a hobby that included a five-thousand-mile trip in a 32-foot Nordic Tug, she now spends most of her time indoors happily reading, writing, cooking and keeping up with the antics of Ralp, the Rescue Cat. If you want to learn more about her activities go to https://www.pamelagibsonwrites.com and sign up for her quarterly newsletter and occasional blog. Or follow her in these places:
Bookbub: www.bookbub.com/profile/pamela-gibson
Facebook: www.facebook.com/pamgibsonwrites/
Twitter: www.twitter.com/pamgibsonwrites
Website: www.pamelagibsonwrites.com
Goodreads: www.goodreads.com/pamgibsonwrites
Amazon: www.amazon.com/Pamela-Gibson/e/B00MKVB4XE


May 25: Viviana MacKade
May 26: Long and Short Reviews
May 26: Gimme The Scoop Reviews
May 27: Locks, Hooks and Books
May 28: Read Your Writes Book Reviews
May 29: Fabulous and Brunette
June 1: Romance Novel Giveaways
June 2: All the Ups and Downs
June 3: Mythical Books
June 4: The Avid Reader
June 5: Iron Canuck Reviews and More