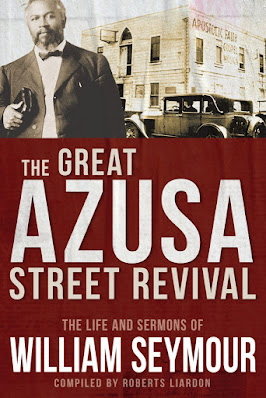 A fascinating collection of the words and teachings of William Seymour in the years leading up to and including the historic Azusa Street Revival, which began in Los Angeles in 1906 before spreading across the country and creating the modern-day Pentecostal movement. Includes historic accounts, eyewitness testimonies to the power of God, and photos capturing the multicultural, worldwide appeal of Seymour and his ministry, including his stirring sermons, which covered a wide range of topics that are still relevant to believers today. Complied by Roberts Liardon, author of the bestselling God’s Generals series.

William Seymour (1870–1922) was an African American, holiness preacher who initiated the Azusa Street Revival, an influential event in the rise of the Pentecostal and Charismatic movements. He was the second of eight children born to emancipated slaves and was raised in extreme poverty in Louisiana. Seymour was a student of early Pentecostal minister Charles Parham, and he adopted Parham’s belief that speaking in tongues was the sign of receiving the baptism in the Holy Spirit. In 1906, Seymour moved to Los Angeles, California, where he preached the Pentecostal message and sparked a revival that drew large crowds of believers as well as increased media scrutiny about the controversial religious practices as well as the racially integrated worship services. Seymour’s leadership of the revival and publication of The Apostolic Faith newspaper launched him into prominence within the young Pentecostal movement. As the revival’s influence extended beyond Los Angeles through evangelism and missionary work, Seymour was in the process of developing the revival into a larger organization called the Apostolic Faith Movement. This process was ultimately defeated by power struggles with other ministers and ultimately damaged the unity of the early Pentecostal movement and led to a decrease in Seymour’s influence. By 1914, the revival was past its peak, but Seymour continued to pastor the Apostolic Faith Mission he founded until his death. The revival acted as a catalyst for the spread of Pentecostal practices, such as speaking in tongues and integrated worship, throughout the world. It also played an important role in the history of most major Pentecostal denominations.

The participants were criticized by some secular media and Christian theologians for behaviors considered to be outrageous and unorthodox, especially at the time. Today, the revival is considered by historians to be the primary catalyst for the spread of Pentecostalism in the 20th century.

For Him and My Family, November 17

Because I said so — and other adventures in Parenting, November 22 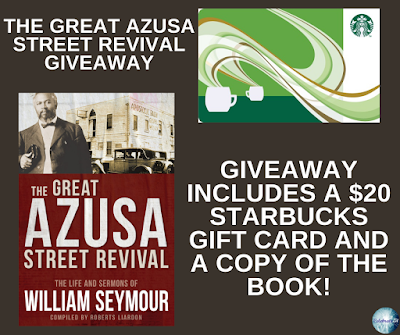 To celebrate this tour, Whitaker House is giving away the grand prize package of a $20 Starbucks gift card and a copy of the book!!

I found The Great Azusa Street Revival: The Life and Sermons of William Seymour to be an interesting read. William Seymour was an inspiring man of God. I enjoyed getting to know who he was and reading his sermons and views on the scriptures.  He sure did offer some power messages, hope and faith for his followers. It seems he continues to do so many years later after his death. It is an easy and quick read that only took me a couple of hours to read. Which was hours well spent.

I am giving The Great Azusa Street Revival: The Life and Sermons of William Seymour four and a half stars. I recommend it for readers who are interested in historical theology.

I received The Great Azusa Street Revival: The Life and Sermons of William Seymour from the publisher. This review is one hundred percent my own honest opinion.