Blog Tour and Giveaway: Evita and Me by Erika Rummel 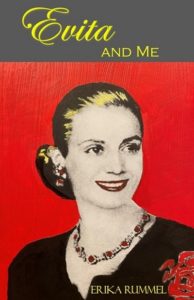 Description Evita and Me by Erika Rummel

Evita Peron’s jewels are missing. Only three people know that they are in a vault in the Swiss Alps; Evita’s corrupt and brutal brother Juan, her bodyguard Pierre, and a teenaged girl Mona, her newest protegee. What happens if two of them team up? Like Eva herself, Mona comes from a broken family and has to make her own way. Perhaps that's why the two women feel close. Evita is at the pinnacle of success but already in the grip of a fatal illness. We see her life through the eyes of Mona and Pierre, two people she trusts -- and who betray her in the end. Or can theft and murder be justified? A story of love, adventure, and murder.

“This is a fast paced page turner. A suspenseful, thrilling roller coaster ride with lots of twisty, loopy sections. Head Games is an apt title for this enthralling read. “- Joy Renee, Joy Story “Identity’s a big theme in this work, so if you’ve ever felt you were someone other than yourself, if you thought you might like to try living in someone else’s skin, if you’ve wondered whether your friends and loved ones were not exactly who they claimed to be, then this psychological labyrinth might just be your winding road to a good read”.- Carole Giangrande, Words to Go “This was a book that grabbed me from the start. It’s a period in history that offered much to the world but also had some of man’s darkest moments. Due to that it does provide rich material for a novelist and Ms. Rummel does an excellent job of taking her reader on a dangerous journey through the twists and turns of what many faced during the time. The characters are well developed and defined. The scenes are well described and I found myself feeling like I was actually walking the streets with the characters of the book.”-Patty, Books Cooks Looks “To live during such tumultuous times would be horrible. You would have to be careful of every word that came out of your mouth. That might be easy when you are alert, but what about when you are so tired that you can’t even think? This book made me thankful that I was born in America in the 20th century. Any fan of riveting historical fiction will get lost in this book from page one.”-Lisa, Lisa’s Writopia

[The mystery of Evita’s missing jewels explained – as told by her bodyguard Pierre.]

The road ends at a metal-studded entrance carved right into the mountainside. The wind feels barbed when we get out of the car, as if the season had changed overnight, and we had skipped the spring and summer.

We walk through the door, which has opened at our approach - some technical alert and response. Inside the mountain, there is a reception area with another steel door at the far side, flanked by a pair of guards. They are armed with machine guns. A gentleman in a pinstriped gray suit receives us with a deferential bow. He seems out of place in this mafioso setting, a banker gone astray. He should be sitting behind a large, polished desk in an office in Zurich. His cheeks are the kind of rosy that doesn’t tan. His neck bulges a little above the immaculate white shirt collar. He isn’t fat, but substantial, a man with a good digestion and easy conscience.

He introduces himself: Reinhard Behrle. We shake hands.  He asks us to sign our names in what looks like a guestbook, except that we also have to ink our thumbs and provide a fingerprint beside our names…

When we are done, Behrle smiles amiably.

“This way,” he says and leads on past the guards, through a narrow door along a passage carved into the rock. The air is stale. Wall sconce with caged bulbs cast a yellow light on the concrete floor. A pipe runs along the wall. I can hear water trickling through it – that and our footsteps are the only sound. Duarte and I each carry one of the steel boxes. His breath is a little labored. We pass through another door guarded by men with machine guns and come to a round steel portal looking like the door of a giant washing machine. Behrle spins the wheel mounted on the portal, using the bulk of his body to shield his exact movements from our eyes. The guards step forward and help him pull open the door. Behrle waves us through. The room inside looks like what you would expect to find in the back of a bank. It is brightly lit, has a tiled floor, white walls, and a row of safe deposit boxes of all sizes sunk into the wall.

Duarte and I place our load on a long counter in the middle of the room. All four of us stand close, watching Duarte open the chest containing the jewelry. The guards with the machine guns have taken up position at each end of the counter. Duarte takes out a fresh pack of cigarettes, but there is no ashtray, and Behrle says apologetically: “May I ask you not to smoke, Mr. Duarte. The air circulation here is limited.”

Duarte puts the cigarettes back into his pocket. His mouth is crimped shut because he is not used to taking orders.

“Perhaps you could lift out the trays,” Behrle says, “and I will check off each item.” He has placed a list on the counter and taken out an elegant black and gold pen.

Duarte opens the first box and hesitates. “The trays are out of order,” he says and looks at each of us in turn. “Number 2 is on top.”

Mona cranes her neck and says: “They are numbered?”

“Yes,” Behrle says and points his pen at a small number stenciled in the corner of the top tray. “We will begin with Tray 2 then,” he says and starts reading from his list: “One amethyst and diamond necklace set in gold, matching bracelet and earrings.”

He looks at the items and checks them off. Duarte lifts out the next tray. When he comes to the fourth tray, we see that it is empty. It’s the tray numbered “1”.

Behrle, who has started reading the description, comes to a stop.

“The necklace is missing,” Duarte says, as if we couldn’t see it for ourselves and needed an interpreter.

No one says anything.

“Perhaps Evita decided to keep it back?” Duarte says slowly and gives Mona a questioning look.

“She did say something about giving jewelry to the shrine of the Virgen del Pilar in Saragossa,” Duarte says. He keeps looking at Mona and me.

“Alright,” he says at last. “I’ll talk to Evita when we get back. We don’t have time to deal with this now. We need to get back to the airport. So let’s just strike that one from the list.”

Behrle draws a thick line through the item on the list. We all initial the erasure and continue with the count.

“Everything else seems to be in order,” Behrle says after we have inspected both boxes. Behrle signs the list to acknowledge the receipt of the jewels. We countersign. A clause at the bottom of the page says that this is merely to certify the quantity, not the quality of the items. Then Behrle opens one of the safe deposit boxes in the wall. He carries the key around his waist, secured to a metal belt by a long chain. He reaches for it as if for a concealed weapon.

Duarte places the two boxes in the safe. Behrle locks up with his key, then hands us each a tiny key, and directs us to take turns applying them to the lock.

Duarte looks up in surprise.

“Three keys?” he says. “My sister put me in charge of the boxes.”

“These are my instructions,” Behrle says.

Duarte wrinkles his brow. “Let’s get it over with, then,” he says.

We put our keys to the lock, first Duarte, then Mona, then I.

“The safe will have to be unlocked in the same sequence,” Behrle explains.

I look at Duarte’s scowling face. He will go after those keys, I think. He will kill to get at them, and I may be first in line. 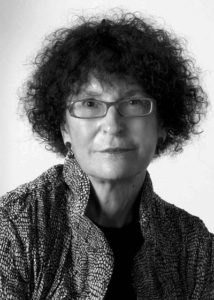 Award winning author, Erika Rummel is the author of more than a dozen non-fiction books and seven novels. Her seventh novel, ‘Evita and Me’ is being published on May 24, 2022. She won the Random House Creative Writing Award (2011) for a chapter from ‘The Effects of Isolation on the Brain’ and The Colorado Independent Publishers' Association’ Award for Best Historical Novel, in 2018. She is the recipient of a Getty Fellowship and the Killam Award. Erika grew up in Vienna, emigrated to Canada and obtained a PhD from the University of Toronto. She taught at Wilfrid Laurier and U of Toronto. She divides her time between Toronto and Los Angeles and has lived in Argentina, Romania, and Bulgaria. Erika’s Website: http://www.erikarummel.com/ Erika’s Blog: http://rummelsincrediblestories.blogspot.ca/ Twitter: https://twitter.com/historycracks

Buy Evita and Me by Erika Rummel

Giveaway Evita and Me by Erika Rummel 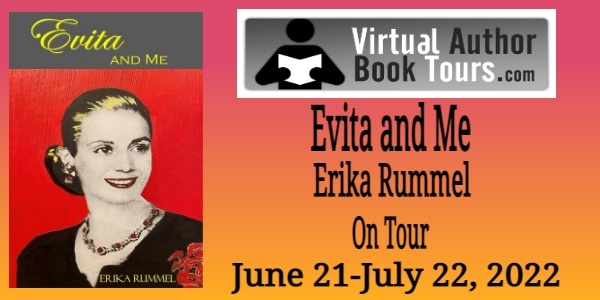 I have had the pleasure of reading books by Erika Rummel in the past. I was excited to have the opportunity to read her newest novel Evita and Me. I did not know much about Evita before reading this but have found myself wanting to know more. The author definitely did her research and it was intriguing how she was able to mix historical fiction and her imagination to make a fabulous story. I enjoyed seeing Evita and those around her come to life. I thought it was great.
I am giving Evita and Me a very well deserved five plus stars. I highly recommend it for readers who enjoy reading historical fiction based on real historical figures. I will definitely be looking and hoping for more new releases from Erika Rummel for years to come.
I received a paperback copy of Evita and Me from the publisher, but was not required to write a positive review. This review is one hundred percent my own honest opinion.
Posted by Amybooksy at 2:00 AM