Blog Tour and Giveaway: Home So Far Away by Judith Berlowitz 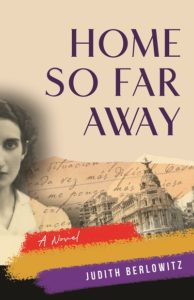 Description Home So Far Away by Judith Berlowitz

A fictional diary set in interwar Germany and Spain allows us to peek into the life of Klara Philipsborn, the only Communist in her merchant-class, German-Jewish family. Klara’s first visit to Seville in 1925 opens her eyes and her spirit to an era in which Spain’s major religions, Judaism, Christianity, and Islam, shared deep cultural connections. At the same time, she is made aware of the harsh injustices that persist in Spanish society. By 1930, she has landed a position with the medical school in Madrid. Though she feels compelled to hide her Jewish identity in her predominantly Christian new home, she finds that she feels less “different” in Spain than she did in Germany, especially as she learns new ways of expressing her opinions and desires. And when the Spanish Civil War erupts in 1936, Klara (now “Clara”) enlists in the Fifth Regiment, a step that transports her across the geography of the embattled peninsula and ultimately endangers a promising relationship and even Clara’s life itself. A blending of thoroughly researched history and engrossing fiction, Home So Far Away is an epic tale that will sweep readers away.

Advance Praise Home So Far Away by Judith Berlowitz

“An affecting, historically astute novel.”—Kirkus Reviews “Judith Berlowitz’s Home So Far Awayis like stepping into an Ernest Hemingway novel, with Kristin Hannah whispering in the reader’s ear. Caught in the political strife around her, devoted to the war-injured she cares for, and struggling to surmount the betrayals of country, the powers over her, and her emerging and conflicting identities as a woman, a Jew, and a Communist, Klara Philipsborn is tossed in the storms that surround her, threatening her person and profession. This vividly told story, written as diary entries, is a captivating picture of one of the many young foreign nationals who committed their lives to this fraught time in twentieth-century Spain.”—Barbara Stark-Nemon, author of Even in Darkness and Hard Cider “Captivating. On the eve of the Nazi rise to power, a German Jewish Communist finds the home she craves in Spain, where she becomes deeply involved in defending the Republic. Klara’s passion for life and freedom and the pungent sensual details create an immersive experience. The kind of diary Anne Frank might have written if she had survived to adulthood.”—Kate Raphael, author of Murder Under the Bridge, a Palestine mystery “Combining meticulous archival research with compelling literary creativity, Judith Berlowitz tells Klara’s story in the form of a diary, from her first visit to Sevilla before the war to her involvement as a nurse and translator during the conflict. Home So Far Away not only brings history to us on a deeply personal level; it also offers a vital lesson for today and tomorrow about the threats to democracy and the critical role that commitment –ethical and ideological—can play in its defense.”—Anthony L. Geist, University of Washington, Abraham Lincoln Brigade Archives “Judith Berlowitz’s Home So Far Away is an absorbing tale: as her heroine Klara moves between a Germany where Jews are increasingly threatened, to Catholic Spain where Muslims & Jews once flourished, her Jewish identity becomes more central, just as it becomes more hidden. A fascinating historical adventure!”—Penny Rosenwasser, author of Hope into Practice " ". . . an emotionally compelling and historically accurate fictionalized diary . . . . Beginning in Germany in 1925 and ending in Spain in 1938, readers see the changing world through the eyes of a Jewish woman who is a self-declared communist . . . . This is an interesting and unique take on the period, and should be considered by public and academic libraries alike."-Booklist

This afternoon as I was leaving the laboratory, some women who identified themselves as medical students approached me and asked me to have tea with them in the cafeteria. It was raining heavily, so it was a pleasure to take refuge in the glassed-in area, and the insistent rushing of the water against the panes accompanied the equally insistent conversation of the women. They all seemed to want to talk at once, so I asked them to simply introduce themselves, one at a time, and let me know what it was that each one was concerned about. I had to ask them to repeat and to speak more slowly, which they tried hard to do, as I took notes.  Here are some of their concerns, to the best of my understanding:

“You are the only female lab assistant and you actually listen to us,” began Julia, a young woman with soft-looking cheeks.

“Did you know that the four of us are the only women medical students this academic year, out of a total of over two thousand medical students?” demanded her sister Pilar, looking around and nodding indignantly. She kindly wrote out the number “2,000” and showed it to me.

“There are some female students who are considered ‘unofficial’ and only come here to take their exams or the classes that prepare for the exams,” she added.

“Yes,” added Pilar, “they come here in special buses and return home immediately after their exams. We try to talk to them as much as possible.”

I felt a tremendous admiration for those women as well as those who were seated around me and attempted to praise them.

“We do as well in our exams as the men do. But you would never know it, because the professors—all of them male—never address us in class,” insisted Herminia, a young woman with an impish smile.

“It has only been legal for women to study at University for the last twenty years,” affirmed Julia, tapping on the table for emphasis, then displaying her fingers for the number “twenty” in case I did not understand.

I was definitely not aware of that fact.

“Some of the male students have written satirical poems about the absurdity of females wanting to become doctors when we should be at home having babies and cooking for our husbands.” Pilar laughed scornfully and gestured the rocking of a baby and the stirring of a pot.

“Do you know how we are placed in our microbiology class?” continued Herminia, setting down her teacup and lowering her voice a bit. She drew a diagram on a sheet of paper as she explained: “Professor Matilla has assigned us seats in the front row. Then he makes all the male students leave three rows empty and all of them pile in behind the empty rows. Does he think our feminidad is contagious? And he doesn’t so much as glance our way. The few times that he looks up from droning through his utterly boring lectures, he looks right over our heads, into the masculine throngs.”

As the women nodded and chortled bitterly, I suddenly realized that at that moment, whatever I said or did would affect their lives. I laid down my pen and took a sip of my tea, and for a moment simply looked at each of them in the eyes. Then I tried to echo their statements in a way that would let them know that I had heard them and that I cared about them:

“You feel . . . invisible.” I paused and looked at them again. They all nodded and many said

The response was again, “Yes!”

“And you would like to be acknowledged as human beings equal to the male humans here at the University.”

An overwhelming chorus of “yeses.”

“We should probably call ourselves Las Invisibles de la Resi,” remarked Herminia, tossing her head. “That is how I felt during the time of my secondary bachillerato studies in Ceuta. I was the only girl and I may as well have been invisible.”

I laughed bitterly, then responded, “Of course you know that I am a foreigner. I have only been in Spain once before this year. I am not really—accustomed—to the way Spanish women are viewed or treated here. But I think the first thing is to become more visible. Please know that I admire you all so much for just being here, not to mention for your academic accomplishments. Do you think it would be a good idea for Doña María [de Maeztu] to know that you are not treated equally in your classes?”

“Señorita Philipsborn, that sounds wonderful. But we would not like you to get into trouble for trying to push things forward more quickly than the administration—and especially the faculty—is willing to move right now,” stated Julia.

“Oh, I see.” I lowered my head and stared into my teacup as I thought for a moment, hoping that the tea leaves would guide me, as Mama had often shown me. I felt even more responsible, and was touched that they were so considerate of me, as busy as they are with their studies. But I am a foreigner and to an extent on probation here in Spain and at the University. “Perhaps I could mention it in a subtle way, if it comes up in conversation. But meanwhile, I would like to know in what ways I can help you . . . Would you like to meet here maybe next week at this time?”

They welcomed this plan, and we will take a table at the Residencia next Wednesday after classes. I thanked them for their trust and the women hugged me as we stood up to leave the cafeteria. Meanwhile, the next time I speak with Dr. Foster I will see if there is a diplomatic way to make a case for her to convince her colleagues to really accept the female students, not simply as bodies that have been placed in their classrooms through royal decree, but as equal participants in the University curriculum. This may be a more difficult task than the chemistry exams I have been compiling. 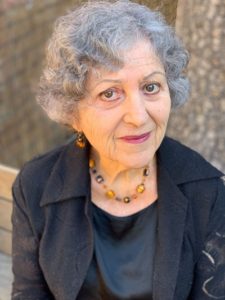 Los Angeles-born Judith Berlowitz holds a PhD in Romance Languages and Literatures and is a federally-certified translator. She is a former professor of Spanish and Cultural Studies and has published works in ethnomusicology, oral history, and Jewish identity. Judith has played classical guitar and oboe and has sung with the Stanford Early Music Singers and the Oakland Symphony Chorus. She currently is a volunteer Curator with the genealogical website, Geni.com, and sings with the San Francisco Bach Choir. She lives in San Francisco with her husband, not far from her three daughters and three grandsons. Website: https://judithberlowitzauthor.com Facebook: https://www.facebook.com/jberlowitzauthor

Pre-order Home So Far Away by Judith Berlowitz

Giveaway Home So Far Away by Judith Berlowitz 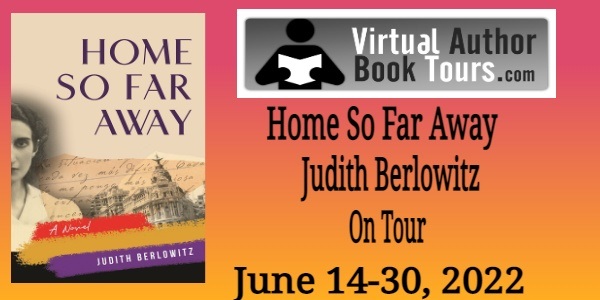