Blurb Blitz and Giveaway: To Kingdom Come by Claudia Riess 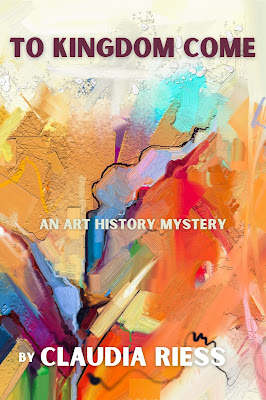 Amateur sleuths, Erika Shawn-Wheatley, art magazine editor, and Harrison Wheatley, art history professor, attend a Zoom meeting of individuals from around the globe whose common goal is to expedite the return of African art looted during the colonial era.  Olivia Chatham, a math instructor at London University, has just begun speaking about her recent find, a journal penned by her great-granduncle, Andrew Barrett, active member of the Royal Army Medical Service during England’s 1897 “punitive expedition” launched against the Kingdom of Benin.

Olivia is about to disclose what she hopes the sleuthing duo will bring to light, when the proceedings are disrupted by an unusual movement in one of the squares on the grid.  Frozen disbelief erupts into a frenzy of calls for help as the group, including the victim, watch in horror the enactment of a murder videotaped in real time.

It will not be the only murder or act of brutality Erika and Harrison encounter in their two-pronged effort to hunt down the source of violence and unearth a cache of African treasures alluded to in Barrett’s journal.

Much of the action takes place in London, scene of the crimes and quest for redemption.

“Dammit!” A mild curse barely audible, but loud enough to light up the frame around Timothy Thorpe’s image. “Sorry mates, bulb blew.” The overhead, it must have been, since the weaker source of light behind his computer was still there, softening his features and maybe for a millisecond the audience’s attentiveness as well, so that when the black line appeared just above his shirt collar it took another blip in time for brains to sort it out and reject the idea of a shadow cast by his desk lamp. Which would explain the silence before the first scream, coming from somewhere in the Zoom’s mosaic, a woman’s scream—mine, Erika realized. Likewise, a delayed reaction from Tim himself, gazing wide-eyed at the screen as if someone out there was experiencing the horror, not he himself, that is, before the black cord tightened around his neck and the impossible truth contorted his features like a funhouse mirror.

And then the silence turned into the Tower of Babel, witnesses reverting to their native tongues, as gloved hands—surely visible from the start!—tugged on the cord and disappeared behind Tim’s neck to knot or entwine or do whatever was planned or improvised to cut off Tim’s air, while Tim clawed at his neck in an attempt to free himself, mouth open in a parody of Munch’s The Scream, except in Tim’s version it was a cry for help mimed to the restless viewers filling his computer screen, twinkling with their useless babble like Christmas lights.

“Où est-il—where is he?” Monsieur Robert Labeque cried, his red cheeks deepening to scarlet, his returning to the group’s common tongue a sign that rational interchange was being restored.

“The museum—his office at the British Museum!” Ike yelled back, as if calling from across a football field. “He said they’re preparing an exhibit, staying late—I’ve got their unlisted number—seeing if I can rouse the damn security guards!” All the while fumbling with his cell phone. “They must seal off the exits. Museum doesn’t close for another half hour!”

“Bastard, we see you!” Harrison shouted at the nondescript torso, mostly hidden by Tim’s body, rigid against the chair-back while his hands flailed like a mad conductor’s. How many seconds had passed—ten, fifteen? A lifetime. “Someone over there call 9-1-1—Olivia?” “I’ve already put in the call—it’s 9-9-9 over here,” Olivia advised, her calmness, real or staged, a reminder that order was possible. “I’m activating the recording option!” Ike bellowed. Shifting focus to his unresponsive phone, he shouted, “Hello? Hello?” Harrison tapped on Thorpe’s name and spotlighted his square. Instantly it filled the screen. He dove for his cell phone. “Erika, take photos!” His words sounded harsh, except she was thinking the same thing, already digging her cell phone out of her jeans pocket. “You video, I’ll take stills—oh God!” Outwardly, Tim had stopped struggling. But what was happening within? Her empathy was suddenly gripped by a primal curiosity, as if only by understanding Tim’s encounter with death could she prepare for her own. “Go!” Harrison prompted. The command cut off her connection to Tim like a dropped call, and she aimed her cell’s lens at his motionless figure in the more useful role as witness to a crime. As she prepared for the second shot, she realized that others were following Harrison’s and her lead.

On screen the assailant’s gloved finger pressed against Tim’s neck, feeling for a pulse. Apparently satisfied, he or she swiftly removed the cord from around the victim’s neck and made adjustments to the distribution of weight so that the body would not slump forward. Mission accomplished, the individual glided out of Tim’s camera range, leaving Tim, in jacket and neatly knotted tie, to stare blankly into space with only an angry red bruise above his shirt collar to suggest what had just happened to him.

An award-winning author of seven novels, Claudia Riess graduated from Vassar and resides in Manhattan and Westhampton Beach. Her most recent novel is the fourth book in her art history mystery series. “To Kingdom Come” will be released in Spring 2022 by Level Best Books.
Last year, Riess signed a second three-book contract with Level Best Books to continue the series that began with “Stolen Light.” The plot involved murder, the Italian Renaissance, and the Cuban Revolution—as well as a love story. The book was chosen by the Vassar travel program coordinator and the Vassar Latin American professor for distribution to the participants in their 2017 “people-to-people” trips to Cuba.
The latest suspense novel set in the art world, sleuths Erika Shawn, art magazine editor, and Harrison Wheatley, art history professor. Now married, the couple is caught up in a multiple-murder case involving the repatriation of African art and artifacts seized by the British in the late nineteenth century during the colonial era. Much of the action takes place in London, scene of the crimes and quest for redemption.
“Riess uses words as an artist uses a paint brush; the pages come to life.” –Joseph Epstein, Ph.D

An engaging speaker, Riess has recently given several author talks via Zoom for libraries* and is scheduled for future Zoom and podcast events at more venues. Subjects include “Anatomy of a Murder Mystery,” “Dangerous Liaison: Fiction and History,” and “The Joys and Perils of Creating a Mystery Series.” Her talks are of interest to both authors and readers.
*“Thank you for a fun evening. It was very interesting to hear about the process of writing.”

Claudia Riess has worked in the editorial departments of The New Yorker magazine and Holt Rinehart and Winston. She has also edited several art history monographs. For more about Riess and her work, visit www.claudiariessbooks.com.
All four books in the art history mystery series are available through Amazon.com, BarnesandNoble.com,IndieBound.org and at independent book stores. For bulk discount purchases, contact https://levelbestbooks.wordpress.com.
http://www.goddessfish.com
http://www.goddessfishpromotions.blogspot.com
Celebrating Eleven Years of Helping Authors Succeed!
We offer book editing services, graphic design, virtual tours and more...

Claudia Riess will be awarding a $50 Amazon/BN GC to a randomly drawn winner via rafflecopter during the tour.