Blog Tour: Review and Giveaway: Once Upon a Christmas Moon

Once Upon a Christmas Moon
by Christine Young, Genie Gabriel, C. L. Kraemer 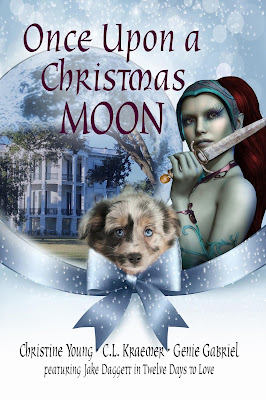 When Archer Steele showed up at Calanthe Durand's failing plantation with an alligator over his shoulder, Cali thought she'd never seen a more handsome man. During the war she'd had to defend herself and her servants from both union and confederate soldiers. Independent and self-sufficient, she'd vowed to never marry.

But Archer Steele has different ideas. The first time Archer had seen Cali in town, he felt an instant attraction. He decided he'd do everything and anything to convince the beautiful Miss Durand he was worthy of her love. During the weeks leading up to Christmas, he gave her twelve gifts to in hopes she'd fall in love with him.

Killian stared at the rise of rock from the desert floor. The emerging sun tricked the sky into revealing pink and blue streamers across the horizon exposing the severe lines of craggy mountains. Pine trees scented the air, and the slightest hint of sage tickled his nose.

“Where are they disappearing to? They’re much too young to be running away.”

The young man turned his blue gray eyes from the mountain to answer. “Yes, Ms. Luna. What can I do for you?”

“Are you sitting out here at this early hour worrying about the young ones?” Luna’s black hair was braided down her back and she sported a shawl bright with her clan’s colors. She handed the young man a steaming cup of coffee. “I hope you don’t mind black. I’ve yet to milk the goat.”

Killian flashed her a seldom seen smile. “Ms. Luna, you make the best coffee in the desert. Black is fine.”

Taking up a spot next to him on the porch, she turned her attention to the mountains admiring the soft colors of rose and tan springing to life in the morning sun. “What is it that haunts you so?”

“The illogicality of it all.”

“Aye, I figured that. It is indeed illogical. The children are too responsible to leave unannounced, yet they are snatched from their beds in the middle of the night with no clues.”

Killian sipped the wicked black brew and allowed the liquid to spike his taste buds. The brilliant light of a new day was caressing the landscape and warming the air. “The kinders disappearing are not inclined to run off. They are the eldest and most reliable. These missings make no sense. They don’t happen in the same area or at the same time. They’re completely arbitrary and being so—random—has given me pause to find a method. If I were to discover a pattern, the recovery would be simpler.”

Luna watched the anguish distort his handsome young face. His blue eyes clouded to a dark grey when he spoke of the missing children, and his normally full mouth stretched to a tight slash across his face.

“I don’t wish to sound cruel, but none of these are young ones of your own family. Why take their absence to heart?”

Killian relaxed his scowl a bit, and a smile began to touch his lips. “Because it is they who will be the leaders of our clans in but a few short years. I had hoped to retire my sword someday to warm my boots by a fire. Having a mate and young ones around isn’t such a bad idea.”

He automatically sipped his dark brew. It would indeed be nice to warm my feet by a fire with a mate and children. The problem being I’ve found no person who makes me think in such terms.

“Well, I must admit, Master Killian, I never would have thought you to be the settling type.” She picked up his cup, returning from the kitchen minutes later with fresh coffee in the container.

“Neither had I, Ms. Luna, neither had I, however, aside from our missing young ones, there has been no conflict between the clans, nor have the Others tried to interfere in our affairs in a very long time. It is a good thing for many but for me, what good is a warrior without a war?”

Luna could only agree with his forlorn assessment; what good, indeed, was a warrior without a war? “Maybe a solution will arrive in the near future. You never know.” 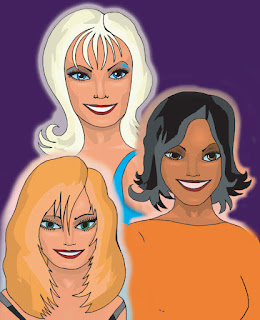 Born in Medford, Oregon, novelist Christine Young has lived in Oregon all of her life. After graduating from Oregon State University with a BS in science, she spent another year at Southern Oregon State University working on her teaching certificate, and a few years later received her Master's degree in secondary education and counseling. Now the long, hot days of summer provide the perfect setting for creating romance. She sold her first book, Dakota's Bride, the summer of 1998 and her second book, My Angel to Kensington. Her teaching and writing careers have intertwined with raising three children.  Christine's newest venture is the creation of Rogue Phoenix Press. Christine is the founder, editor and co-owner with her husband. They live in Salem, Oregon.

A traveler for most of her life, C. L. Kraemer has settled in the Northwest with her husband and two cats. When not creating a new world or entity, she likes riding next to her husband on their Harleys.

I'm an optimist whose rose-colored glasses have bent frames and cracked lenses. When life kicks me in the teeth, I find miracles and lessons I refused to learn an easier way. In fact, I live with a small herd of miracles in the furry forms of dogs, who are constantly trying to teach me to forgive, to play more, and to love without limits.

I write about people who find courage and integrity in the darkest times of their lives, who rescue stray dogs and kittens, who find a person they would willingly give their lives for, and who make their little corners of the world a better place.
People have remarked my stories "aren't what they expected." With rose-colored glasses firmly in place, I take that as a compliment.

Christine Young, Genie Gabriel, C. L. Kraemer will be awarding one digital copy of Once Upon a Christmas Moon to a randomly drawn winner via rafflecopter during the tour.

Once Upon a Christmas Moon is a collection three Christmas stories which includes:
Twelve Days to Love by Christine Young
Boots and Blades by CL Kraemer
Christmas Pawsibilities by Genie Gabriel

I thought these were fun to read. I, especially, liked Twelve Days to Love. I was hooked from the beginning.  Boots and Blades is an interesting story to me. Christmas Pawsibilities is not my normal read but I still enjoyed it.