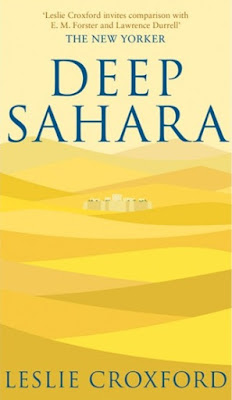 
Klaus Werner travels to the Algerian Sahara to research a book on desert insects. He is billeted in a local monastery, but upon arrival he finds it empty of its inhabitants. He soon discovers that it is a recent crime scene.


The front door has just closed. I’m finally alone in the apartment, using this morning’s stillness to begin the account I’ve been wanting to write for days. It’s a letter to myself after the battering I’ve received from the media – not to mention the anonymous death threats – for attacking our so-called “pillars of society”.


I need to sift through all that happened out at the end of the world, coming back to me now like some dream. For the Sahara’s a place of mirages you can actually photograph: palm trees, oases, expanses of cool water, silent cities – there, but unreal. Conjuring up the past, I want to reassure myself that all I claimed to have found among those shifting sands, on returning here to Rome, far from being the figment of my imagination critics allege, is actually the case: that the experience of unearthing – of understanding - what I have revealed has made me into a new person.


Silence holds heavy. The blankness of this page is as intimidating as the desert itself. Still, I’ve plunged in, covering the paper like a suspect instructed by the police to write everything down. And though I’m no criminal, I’m scribbling both as a release and for the reader I sense exists, but can’t identify. This I do know: it’s someone with whom the self I’ve achieved – as well as how I’ve done so – strike a chord. He’ll see me as the solitary figure I was, in a monk’s habit like a Bedouin’s burnoose, lost against the pitiless Saharan sky. And he’ll find me faced with coming to myself in that emptiness to which life had finally brought me.


Yet, writing, so much I must recall is painful. I’m concerned that I’ve little more than my memory – that mirage – to rely upon, especially after all this time. Nevertheless, I know I must set out fully everything that took place, to see what was actually so, for my own peace of mind.


That’s why I have set aside the book I keep telling myself I should be working on. I’ve no alternative now but to write and finally establish the full story of what happened in the deep Sahara.


Leslie Croxford is a British author and Senior Vice-President of the British University in Egypt. Born in Alexandria, he obtained a doctorate in History from Cambridge University. He has written one novel, Soloman's Folly (Chatto & Windus), and is completing his third. He and his wife live in Cairo.

Leslie will be awarding a $10 Amazon or B/N GC to a randomly drawn winner via rafflecopter during the tour.

Deep Sahara is the first book I have read by Leslie Croxford. I found it to be intriguing. The plot is unique and refreshing. I was fascinated by Klaus Werner. He definitely goes on an unexpected adventure. The mystery and suspense is one that keeps the reader wanting to find out what will happen next.

I highly recommend Deep Sahara for those who loves a good, thrilling page turner. I hope to read more by this author in the future.