Review: If I live by Terri Blackstock 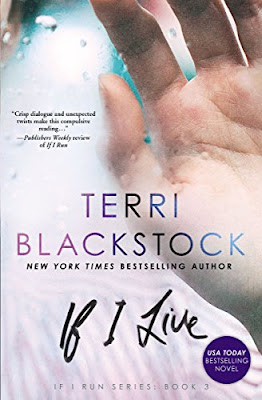 THE HUNT IS ALMOST OVER.
Casey Cox is still on the run after being indicted for murder. The hunt that began with her bloody footprints escalates, and she’s running out of places to hide. Her face is all over the news, and her disguises are no longer enough. It’s only a matter of time before someone recognizes her.
Dylan Roberts, the investigator who once hunted her, is now her only hope. Terrifying attempts on Dylan’s life could force Casey out of hiding. The clock is ticking on both their lives, but exposing the real killers is more complicated than they knew. Amassing the evidence to convict their enemies draws Dylan and Casey together, but their relationship has consequences. Will one life have to be sacrificed to protect the other?
With If I Live, Terri Blackstock takes us on one more heart-stopping chase in the sensational conclusion to the If I Run series

If I Live is the exciting third installment from Terri Blackstock’s If I Run series. I have enjoyed this series and If I Live did not disappoint. Like the first two of the series, I was hooked right from the start. The author really has a gift to keep the reader engaged with the story and not want to the book down.

I highly recommend If I Live and give it a well deserved 5 stars.

I received this book from the publisher, but was not required to write a review. This review is 100% my own honest opinion.
Posted by Amybooksy at 2:00 AM