Review Tour and Giveaway: The Trail to Love by Tina Susedik

The Trail to Love 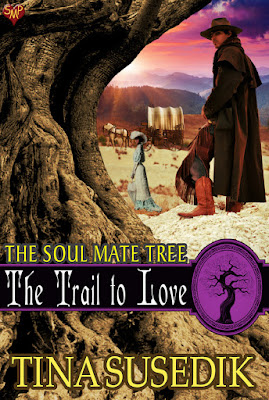 
Jack Billabard, mourning the loss of his wife and baby in childbirth, vows to never to love again. After their funeral at Fort Laramie, he rides into the Wyoming hills beyond the ranch he built for his wife. Through his grieving tears, an ancient tree appears, giving him the hope he doesn't believe is possible. For the next four years, he acts as a guide on the Oregon Trail, taking families to a new life while his looms lonely and stagnant.


The night before her abusive husband’s death, an ancient tree appears in Sarah Nickelson's yard as she agonizes over how to survive her marriage. The tree gives her hope she can’t help but reject. After all, a tree doesn't just appear out of nowhere. After her husband 's death, and with no options as a widow in Independence, Missouri, Sarah decides to travel to Oregon City as a Mail Order Bride.


During their trek west on the Oregon Trail, Jack and Sarah encounter one another, each afraid of being hurt again. Can they survive dogs and puppies, wind and rainstorms, Indians and unfavorable fellow passengers, while their love blossoms? Will the tree fulfill its promise?

Cold seeped into his bones. Something warm blew across his face and ears. Jack swatted at his ears and peeled one gritty eye open.


"Papaya!" He pushed at the horse's nose. "Go away." Papaya continued prodding at him. "Darn horse." He rubbed his cold hands together.


In the dim light, he wasn't sure if it was morning or evening. The previous day's events came back to him. He sat up and wiped a hand over his stubbly chin. Tears burned behind his eyes.


Papaya tugged at his sleeve until the only thing he could do was stand. "Darn it, horse, leave me alone." He pushed the horse to the side. The sun rising behind the mountains from the east cast a shadow on a tree Jack swore hadn't been there the night before.


Standing at least twenty feet high, the trunk was twisted and gnarled like the arthritic hands of his grandfather. Several roots rose from the ground making it look as if it would walk away. Some of its massive branches drooped close to the ground, like arms dragging across the grass.


As the sky lightened, he realized that, unlike the rough bark of the pines at this altitude, the tree's light brown bark was smooth. Was it the lighting, or did some of the bark actually seem golden while in other places it was rough and dark brown? The surrounding trees paled in comparison.


Jack stepped closer. Pale green, oval leaves reminded him of an elm tree, only much smaller. When the wind blew, the undersides shimmered with a silvery glow. 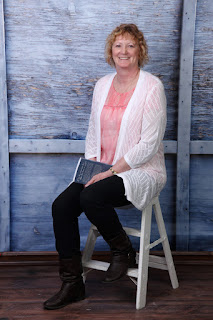 Tina Susedik is an award-winning, multi-published author with books in both fiction and non-fiction, including history, children’s, military books and romances. Her favorite is writing romance stories where her characters live happily ever after. She lives in Northwestern Wisconsin and is a member of Romance Writers of America, Wisconsin Romance Writer's of America, Wisconsin Writer’s Association, and Sisters In crime. Her twentieth book will be released in November with her Chandler County book, Missing My Heart.  Tina also write spicier romances as Anita Kidesu.


Tina Susedik will be awarding a $10 Amazon or Barnes and Noble GC to a randomly drawn winner via rafflecopter during the tour.

May 2: Locks, Hooks and Books

The Trail to Love is the fourth book from the Soul Mate Tree series and my first introduction to Tina Susedik’s work.  I liked it. I liked Jack and Sarah and loved how they interacted with one another. Though some scenes were a little spicier than I like to read in a book, that is a personal preference of mine and I’m sure others would not be bothered by it.

I give The Trail to Love 3-1/2 stars and recommend it for those who love a good historical romance with lessons of learning how to let go of the past and moving on.