This post is part of a virtual book tour organized by Goddess Fish Promotions. The authors will be awarding a $25 Amazon or B/N GC to a randomly drawn winner via rafflecopter during the tour. Click on the tour banner to see the other stops on the tour. 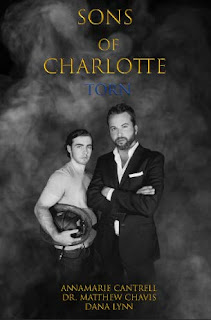 How many secrets can the Queen City conceal?

After a head injury on the basketball court, Tony Malone, a firefighter, confides in his best friend and captain, Steve, about a strange dream he had while unconscious. It was as if he were living a different life. Steve brushes it off as related to his injury, but Tony begins to experience more phenomena with these new memories, unbeknownst to his wife, Lana. Tony struggles to live with his secret until a fire opens up a whole new world.

Chuck Thomas began his ascent to greatness at a graphic design firm headed by Elizabeth Wheaton, the battle-ax of the Queen City corporate scene. A series of Chuck’s immoral decisions leaves the very powerful Wheaton with a raging vendetta. The playboy eventually meets Valerie Meyers, a shy girl with a complicated past, and the two marry. Their idyllic life is halted by a suspicious brush with death leaving Valerie once again picking up the pieces.

Two Souls, Too Many Questions

Literally torn between two worlds, Valerie must once again deal with the loss of her husband and come to terms with what happened to Chuck Thomas and who Tony Malone really was.

“Hey, so what? Oooh, I said ‘Shamu.’ Big whoop. C’mon man. You know she's been called that and worse before. Besides, she knows she’s freaking gorgeous now. That’s how she stole you from me. We had a good thing going and she messed it all up!” Grant’s demeanor was gradually showing more of his intoxication, but Chuck couldn’t help himself. In one swift motion, Chuck lifted Grant off the chair by his collar and pinned him against the brick wall beside the door.

“I’m done with you! You have always been an entitled narcissist, but I will not… hear me, Grant… I will NOT allow you cause problems in my marriage. I put up with all of your snide remarks and inability to take responsibility, but I’m just as bad as you if I let this slide.” With his forearm pressed firmly against Grant’s windpipe, Chuck was thankful for the shadow he noticed creeping over his friend’s face by the headlights of a cab making its way up the drive. “Your ride is here.” He released Grant from his grasp and took a step back.

“You’ll be sorry you overreacted tomorrow, Chuck. I’m the one who has always been here for you.” Grant readjusted his collar and cut a look at Chuck.

“No. When you sober up, you’ll be sorry. I need you to understand that you’re not welcome here anymore. Don’t call, don’t text, don’t step one foot on my property. Do you understand? I’m done with this, I’m done with you.”

About the Authors: Along with being a successful writer and editor, AnnaMarie Cantrell is a self-made entrepreneur, starting her first consultation firm at the age of 18. She is Co-Founder and Vice President of Captive Ink Media, a literary consulting firm offering expertise to authors at all stages in their careers, and providing clients national exposure in media outlets such as The Chicago Times, Reader’s Digest, and Bustle. Her work with veterans was recently featured on the CW.

Dr. Matthew Chavis is an accomplished author and speaker. His works have been featured through a plethora of avenues. His inaugural book Old Highway 316 offers readers a glimpse into his life, as he loosely based this fiction novel on his testimony and was recently featured on the 700 Club. Many of his stories encompass the best aspects of romance, drama, paranormal and suspense/thrillers.

Through her own unique marketing plan, Dana Lynn transformed a self-published book into a serious work garnering national attention and bestseller status (under the pen name Katharine DeBrecht). She has appeared on every national cable news network numerous times and on over 500 radio shows across the country, repeatedly requested for additional appearances. As a self-syndicated writer, her opinion-editorials have appeared in major newspapers throughout the United States and across the globe.