Review: The Sound of Distant Thunder by Jan Drexler 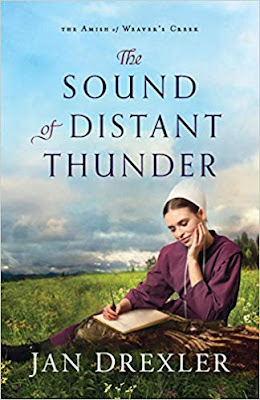 Katie Stuckey and Jonas Weaver are both romantics. Seventeen-year-old Katie is starry-eyed, in love with the idea of being in love, and does not want to wait to marry Jonas until she is eighteen, despite her parents' insistence. So much can happen in a year. Twenty-year-old Jonas is taken in by the romance of soldiering, especially in defense of anti-slavery, even though he knows war is at odds with the teachings of the church. When his married brother's name comes up in the draft list, he volunteers to take his brother's place. But can the commitment Katie and Jonas have made to each other survive the separation?From the talented pen of Jan Drexler comes this brand new Amish series set against the backdrop of the Civil War. She puts her characters to the test as they struggle to reconcile their convictions and desires while the national conflict threatens to undermine and engulf their community.

The Sound of Distant Thunder is the beginning of a new series called The Amish of Weaver's Creek. I enjoyed the combination of Civil War era historical and Amish fiction. Jonas and Katie are a sweet couple but with war keeping the apart, can they stay committed to one another?

I look forward to the next installment of The Amish of Weaver's Creek to see what happens next. I give The Sound of Distant Thunder three and a half stars.