Review: Shelter of the Most High (Cities of Refuge, #2) by Connilyn Cossette 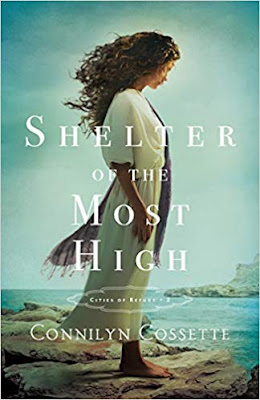 The daughter of a pagan high priest, Sofea finds solace from her troubles in the freedom of the ocean. But when marauders attack her village on the island of Sicily, she and her cousin are taken across the sea to the shores of Canaan.Eitan has lived in Kedesh, a City of Refuge, for the last eleven years, haunted by a tragedy in his childhood and chafing at the boundaries placed on him. He is immediately captivated by Sofea, but revealing his most guarded secret could mean drawing her into the danger of his past.As threats from outside the walls loom and traitors are uncovered within, Sofea and Eitan are plunged into the midst of a murder plot. Will they break free from the shackles of the past in time to uncover the betrayal and save their lives and the lives of those they love?

Connilyn Cossette does it again in her second installment of her Cities of Refuge series, Shelter of the Most High. She knows how to bring to life characters of the Biblical era. Sofea's story is beautifully written. I enjoyed visiting with Eitan again from the first book of the series.

I give Shelter of the Most High four and a half stars and I highly recommend it. I can not wait to see what happens next in the Cities of Refuge series.

I received this book from the author, but was not require to write a review. This review is 100% my own honest opinion.