Review: Grateful American: A Journey from Self to Service 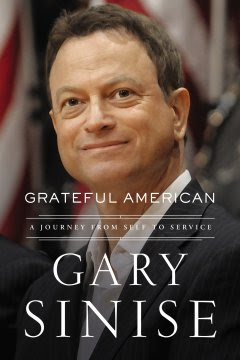 Grateful American: A Journey from Self to Service by Gary Sinise
My rating: 5 of 5 stars


The moving, entertaining, never-before-told story of how one man found his calling.
"The book is called Grateful American, and I promise you after you read it you will be grateful for what Gary has accomplished and contributed to our country." -- Clint Eastwood
As a kid in suburban Chicago, Gary Sinise was more interested in sports and rock 'n' roll than reading or schoolwork. But when he impulsively auditioned for a school production of West Side Story, he found his purpose--or so it seemed.
Within a few years Gary and a handful of friends created what became one of the most exciting and important new theater companies in America. From its humble beginnings in a suburban Chicago church basement and eventual move into the city, the Steppenwolf Theatre Company launched a series of groundbreaking productions, igniting Gary's career along with those of John Malkovich, Joan Allen, Gary Cole, Laurie Metcalf, Jeff Perry, John Mahoney, and others. Television and film came calling soon after, and Gary starred in Of Mice and Men (which he also directed) and The Stand before taking the role that would change his life in unforeseeable ways: Lieutenant Dan in the Academy Award–winning Forrest Gump.
The military community's embrace of the character of the disabled veteran was matched only by the depth of Gary's realization that America's defenders had not received all the honor, respect, and gratitude their sacrifices deserve. In the aftermath of the September 11 attacks, this became Gary's mission. While starring in hits like Apollo 13, Ransom, Truman, George Wallace, CSI:NY, and Criminal Minds: Beyond Borders, Gary has worked tirelessly on behalf of those who serve this country, entertaining more than a half million troops around the world playing bass guitar with his Lt. Dan Band, raising funds on behalf of veterans, and eventually founding the Gary Sinise Foundation with a mission to serve and honor America's defenders, veterans, first responders, their families, and those in need.
Grateful American is the moving, entertaining, profoundly gripping story of how one man found his calling: to see that those who defend this country and its freedoms are never forgotten.

I had been wanting to read Gary Sinise’s Grateful American: A Journey from Self to Service since I saw an interview, he did promoting it on a podcast. I was excited when I had the opportunity to receive a copy for an honest review. Mr. Sinise tells his life story starting with his growing up years, his road to become an actor, how he got the role on the award-winning film Forrest Gump and other successful movies and shows he was part of, and most importantly how he became involved with The Gary Sinise Foundation.

I found Grateful American: A Journey from Self to Service to be a fascinating and interesting read. I liked getting a glimpse into this actor’s beginnings. He was quite candid on his life. He discusses his parents and siblings, as well as, his love of his life. He was quite the rebel in his younger years. I had to giggle when he told about his marriage and their wedding night. I was surprised to find that he seems to shy away from the Hollywood scene or not be within the “inner circle”. I admire what he strives to do honoring the veterans and responders. I love his compassion on what he does for this community.

Grateful American: A Journey from Self to Service is most definitely a must read. I highly recommend it for all readers who want to learn more about the life of this admirable actor, The Gary Sinise Foundation and what he has done for American veterans and responders over the years. After reading it, I am a grateful American knowing that my country has Mr. Sinise on its side.

Grateful American: A Journey from Self to Service is getting a very well deserved five plus stars. This heartwarming book is a great read. Job well done, Mr. Sinise!