I am thrilled to be hosting a spot on the ATTRACTION by Ruby Porter Blog Tour hosted by Rockstar Book Tours. Check out my post and make sure to enter the giveaway!
About the Book: 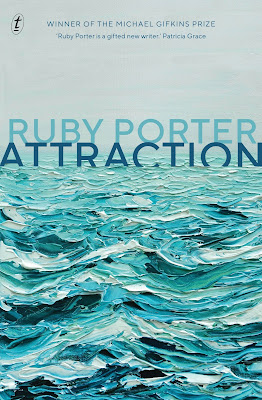 The present reckons with the past in Attraction, Ruby Porter’s debut novel.

Three women are on a road trip, navigating the motorways of the North Island, their relationships with one another and New Zealand's colonial history. Our narrator doesn't know where she stands with Ilana, her not-quite-girlfriend. She has a complex history with her best friend, Ashi. She's haunted by the spectre of her emotionally abusive ex-boyfriend. And her period's now weeks late.

Attraction is a meditative novel of connection, inheritance and the stories we tell ourselves. In lyrical fragments, Porter explores what it means to be and to belong, to create and to destroy.

‘Attraction peels back the landscape to reveal deeper truths. The writer is right inside her material – a road trip that delivers a political and sexual coming-of-age narrative. The book is a slow-burning fuse that brims with intensely felt experience. Porter is an exciting new talent.’―Lloyd Jones

‘Attraction is an exquisite story…The prose is emotive and artistic…Attraction is impossible to put down…It is a brilliant, beautiful novel.’―Booksellers NZ

‘A coming-of-age story that is full of evocative sketches of the North Island’s landscapes.’―Traveller magazine

‘Tackling a complex, fraught topic – the very essence of what it is to be a New Zealander – with courage, style and insight.―Stuff New Zealand
‘Not a word is wasted. Imagery is of the sharpest level. There is so much to love about this angry, meditative novel that reading it is almost an act of catharsis.'―The AU Review

Guest Post
Top 5 favorite scenes and why
The Drowning
This scene had to work on a number of levels: it had to show the bond forming between Ashi, the narrator’s best friend, and Ilana, her not-quite-girlfriend. It had to show the narrator’s uneasiness at this bond, the small things she notices: “Sometimes, Ilana puts her hand on Ashi’s arm as they wade back out deep.” But mostly, it had to force you to relive every time you’ve nearly drowned. I had to get right inside that feeling, below the surface of the sea. I used my sentence structures to make those moments sped up and disorientating, and then slowed down and extended: “A flash of light, greeny brown, something above the surface. The whir. The spin. The sea gasping, in and out, one giant lung that expands and compresses. When you’re beneath it, the ocean is the only thing that breathes.” And when she’s finally swept into shore, this scene had to show her physical and emotional estrangement from her friends. They hadn’t noticed a thing.
The Car Fight
I wrote this scene after, of all things, an argument about Monica Lewinski. I’d said you can’t fully consent when you’re twenty-three, and your boss is the most powerful man in the world. I was told, “It takes two to tango.” On my whole way home, I could feel anger as a presence inside my body, something heavy, and hardening. Something I couldn’t shake free. I’d been holding off writing this scene for weeks. I knew it was crucial, a turning point, but I was struggling with how to describe the physical sensation of anger. Well, I got home and I just wrote. I could hear it all – everything my narrator and Ilana were saying to each other. And I could feel it too – the rising speed of the car, the air thickening, the kind of silences which feel worse than yelling.
The Dead Fish
The narrator takes a twenty dollar note in an envelope to give to the local iwi (tribe) at Whāngārā, where they are staying. When she realises she’s left the macron off their name, Ngāti Konohi, she keeps the money for herself. It’s a particular kind of white anxiety – she’s so paralysed by the fear of getting something wrong, that she doesn’t act at all. Returning to the beach house, she finds dead fish on the lawn: “there’s a fold like lips, but it looks as porous as mesh, as rubbery as a shoe inner. The fabric could be skin or the skin could be fabric—either way it’s a kind of leather. When I turn it over with a stick, I can see it has two holes for eyes, and pus-yellow balls fallen right inside the skull.” They become a bad omen for her, an omen she shouldn’t be staying at that beach, though she doesn’t say as much. She simply bags them up, throws them out, and doesn’t tell her friends.
The Bedroom Fight
Can you tell I like writing fights? I always set it as an exercise for my students. They have to take two of their characters, even two who will never actually meet, and make them argue. You can learn a lot about characters by sticking them in an argument. In this one, Ashi tries to comfort the narrator, but she doesn’t realise what’s wrong, and the narrator refuses to say how she really feels. There are so many moments for connection in this scene, but all of them are lost: “She sits on the corner of the bed and takes off her silver hoop earrings, as if she’s about to lie down next to me. Yes, I think. Lie down. We don’t need to do this, we don’t need to say a thing. We can just lie together for a while.
“But then she puts them back on again, metal through flesh.”
Each misconstrues the other; each hurts the other, too. “Fuck off, Ashi. The words sit in my mouth like a hard round lolly, delicious, tempting, just ready to slide off my tongue.
“—Has your vitiligo spread? I say instead.
“—No?
“Her hand draws instantly, instinctively, to her shoulder.”
It’s the first chance to see the narrator’s cruel side.


The Twelve-Year-Old Cigarettes
Ilana and the narrator have finally cracked, finally been truly honest with each other. Ilana had smoked all her cigarettes the night before, so the narrator shows her where her grandmother hid a just-in-case pack, after quitting twelve years ago.
“The paper of a twelve-year-old cigarette is parched and crunchy between your fingers. You have to be gentle to keep it intact. The tobacco is dry and thinned. It falls out like bits of curly hair from a razor. The inhale is harsh.
“It doesn’t taste like anything, really, except smoke, except heat.”
They sit on the back porch, their words and breath disjointed, smoking until the pack is gone, and Ilana is too. 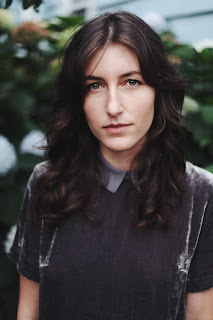 Ruby Porter is a tutor of creative writing at the University of Auckland. She has been published in Geometry Journal, Aotearotica, Spinoff and Wireless, and a selection of her poetry is available on NZEPC. In 2018, she also won the Wallace Foundation Short Fiction Contest.