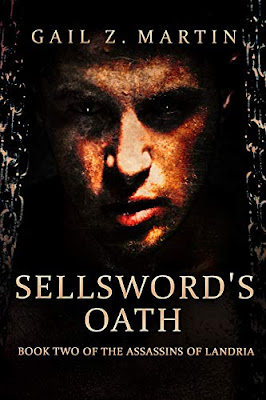 ~~~~~~~~~~~~~
GENRE:   Fantasy
~~~~~~~~~~~~~
BLURB:
Buddy flick epic fantasy! The second in the Assassins of Landria series from the award-winning, bestselling author of Scourge: A Novel of Darkhurst and The Chronicles Of The Necromancer books!

Wandering mystic Yefim Makary, known to his followers as the ‘Witch Lord’, disappeared before he could be accused of inciting dissent against King Kristoph. His supporters among the disenchanted aristocrats who weren’t arrested have fled or died by their own hand. The king is happy to put the matter behind him. Yet Burke, the commander of the elite King’s Shadows, doesn’t believe the threat is over, and he assigns his two most troublesome, rule-breaking—and successful—assassins to ferret out the real threat and put a stop to Makary’s plots.

Joel “Ridge” Breckinridge and Garrett “Rett” Kennard rose through the ranks of the Landrian army together, from teenaged conscripts to seasoned fighters. Together, they became the most feared team of assassins in Landria, surviving longer that most in their profession by virtue of excellent fighting skills, legendary bravado, peerless strategy, and an uncanny synchronicity.

As the threads of a new plot come together revealing disloyalty among the priests and generals, Ridge and Rett once again find themselves on the run, hoping they and their allies can figure out the Witch Lord’s latest scheme before it costs them their lives—and the king his throne.


~~~~~~~~~~~~~
EXCERPT
“Nice shooting,” Ridge said, reaching for the wooden cage attached to his saddlebag that held a carrier pigeon. He opened the cage door, setting the bird free, knowing it would fly back to the closest king’s garrison with a note telling the guards where they could retrieve the bodies of the smugglers and proof that the assassination had been completed.
“Thank you. It was a rather satisfying outcome, if a bit showy,” Rett replied with a grin.
“Burke will have our guts for garters for the explosion,” Ridge warned, swinging up into the saddle.
“How long do you think we can get by with being the guys who saved the king?” Rett mused.
“Not nearly long enough.”
The two friends bantered the whole way back to Caralocia, taking a different route than the way they had come. Anyone watching would have seen two gentlemen out for a ride, although the truth was far darker. As King’s Shadows, elite assassins loyal to King Kristoph, Joel “Ridge” Breckenridge and Garrett “Rett” Kennard had become something of a legend among those privileged to know of such things. Everything about them defied convention, much to the annoyance of some of their fellow assassins.
In a business where most Shadows operated as loners, Ridge and Rett had always hunted their quarries together. Their friendship and absolute loyalty to one another was equally uncommon, given their business. But Ridge and Rett had formed a bond back in the orphanage when they were just eight and ten, and it had carried them through those days of hardship as well as their climb through the ranks in the army. Along the way, they’d made plenty of enemies, both among the traitors and criminals they hunted, and, by their outstanding success, within the ranks of their allies.
“How much dirt do you think Henri’s been able to turn up on those counterfeiters?” Ridge asked as they rode along a quiet stretch of highway. He might appear relaxed to anyone who happened by, but both men remained alert, knowing that they were never truly safe.

Q: What do you have to have while writing?
A: Coffee! I function on a pot a day. I’m not a morning person, so coffee gets my brain up and running to go along with my body. Drinking a warm beverage is very soothing to me, and it’s honestly something that has just gone along with creating and writing since I was in college. I try not to snack, so drinking coffee also gives me something to do with my hands and beats the urge to nibble. I usually have some flavored creamer on hand, or flavored coffee, so I try to make my coffee fun. I also have quite a collection of mugs with all different designs, so that’s also part of the enjoyment for me, because each of those mugs has a story. So for me, behind every book is a whole lot of coffee.
~~~~~~~~~~~~~
GIVEAWAY:
Gail Z. Martin will be awarding a $25 Amazon or Barnes and Noble GC to a randomly drawn winner via rafflecopter during the tour.