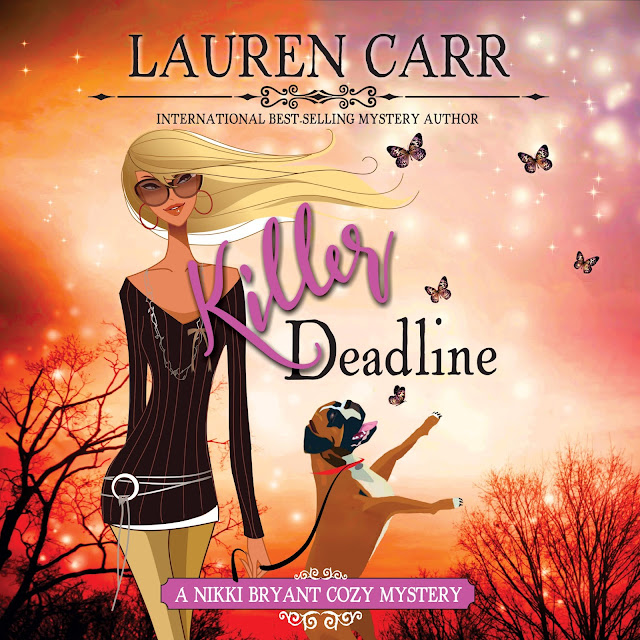 Book Title:  Killer Deadline (A Nikki Bryant Cozy Mystery) by Lauren Carr
Category:  Adult Fiction (18 +),  232 pages
Genre:  Mystery/Cozy Mystery
Publisher:  Acorn Book Services
Release date:   April 23, 2020
Audiobook release date: August 5, 2020
Content Rating: G. This is a true cozy mystery. No sex. No on-stage violence. No swearing. Just good clean fun!
"Here we go! Carr is a master storyteller who always offers a plot full of twists and turns, a bit of humor to offset the dark, and a unique cast of characters. In Killer Deadline that cast includes - handsome Ryan, her first love (who is now her step-brother); a mysterious social media friend called Nerdy Guy; Elmo, a super smart dog, a boxer, she rescued who has become a social media star and has a penchant for cleaning; a TV station full of suspicious employees; and more.

"This book is a wonderful read to pick up at the end of a long day. It truly is a "cozy murder mystery."  I promise, it'll draw you in right from page one and keep you turning the pages until you reach the very last page. I can't wait for the second book in this series." - Marilyn R. Wilson, Olio by Marilyn
Book Description:

Folks in Pine Grove, Pennsylvania, claim that where Nikki Bryant goes, trouble is not far behind. Her refusal to back down from a challenge has made Nikki Bryant a top investigative journalist.

When an online friend nudges her to join him in a pact to reconnect with their first loves, Nikki and her boxer dog Elmo leave the bright lights of Las Vegas for the charming town of Pine Grove. There, she must face the biggest challenges in her career and life—the first love she had left behind and her father’s unsolved murder.

But before she has time to unpack her car, Nikki stumbles upon the dead body of local news anchor, Ashleigh Addison, her childhood rival. Could Ashleigh’s death be connected to an explosive news story that she had teased about airing live? Did that explosive story have anything to do with the murder of Nikki’s father?

With the clues in her father’s cold case hot again, Nikki intends to chase down the story of her life until she catches his killer—no matter what it takes.
Buy the Book:
Amazon.com ~ Audible ~ BookBub
Add to Goodreads 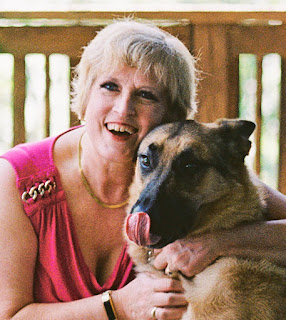 ​A popular speaker, Lauren is also the owner of Acorn Book Service, the umbrella under which falls iRead Book Tours. She lives with her husband and two spoiled rotten German Shepherds on a mountain in Harpers Ferry, WV.

American Journalist and Biographer Gene Fowler once said, “Writing is easy: All you do is sit staring at a blank sheet of paper until drops of blood form on your forehead.”

Yeah, right. Try writing murder mysteries. Not only will drops of blood be forming on your forehead, but it will be dripping out of your eyeballs as well.

I’m sure any author of any genre will claim that theirs is the most difficult to write.

Take romance, for example. Girl meets boy. Boy meets girl. They fight. They realize their hatred for each other is really sexual tension. They give into “the urge.” They fight again. They discover they can’t live without each other. They get married. The End.

For a twist, let’s do romantic-suspense. Girl meets Boy. Boy meets Girl. One of them is a secret agent or hit man working for the government or undercover cop—whatever—one of them is in a dangerous line of work that puts the other in the line of fire. They are running for their lives and both look really hot while bullets are whizzing over their heads. They find a moment of peace to do the deed. Bad guys get the jump on the couple. One of them is taken hostage. The other saves him/her. The bad guys are killed and the couple lives happily ever after. The End.

As a murder mystery writer, I claim that murder mystery writing is the tougher game, especially for writers, like me, who prefer to keep their books character driven and to have their protagonist solve the case with his brilliant intellect.

Some readers, and writers, have found that the reality of technology and the justice system has thrown a monkey wrench into the general murder mystery premise:

Someone gets killed. Detective surveys the scene. Questions all of the witnesses. Tracks down suspects. Cunning Killer lies. Detective is stumped. Cunning Killer slips up. Brilliant Hero detects the Killer’s mistake. Traps Killer. Killer confesses and goes off to prison.

Anyone fourth grader knows that such is not the case in real life.

Between technology: “Oh, you say you were never in that room? Well, we found your DNA from where you sneezed on the victim’s baloney sandwich right before you slit his throat with the butter knife.”

And justice system: “Is that all you got? A car filled with nuns saw your suspect running out of the house with a bloody knife in his hand at the time of the murder? His defense attorney is going to claim that they are conspiring to railroad him into jail because he’s Jewish. Come back with something more and I’ll get you a search warrant for the bloody knife.”

Some mystery writers see this as a killjoy. What fun is there in having a dull computer database spit out the name of the killer, especially when it’s someone who wasn’t even on the protagonist’s radar? Then, many readers, myself included, get frustrated when the mystery turns from a whodunit, but how-are-we-gonna-catch-‘em?

This is where the rubber hits the road. In reality, these hurdles add to the fun for the author. It doesn’t take away from the protagonist. Real detectives, true-life protagonists, deal with these real issues every day.

Sure, the computer database, devoid of personality, may spit out the pieces of the puzzle, just like the collection of witnesses may lay out their pieces of the puzzle. A clever defense lawyer may throw up legal hurdles to protect the killer—but hasn’t that always been the case?

Today’s real detectives come up against different types of hurdles than the investigators of fifty years ago, which were different from the hurdles fifty years before that.

While the murder investigation game may be different than it was in the days of Hercule Poirot and Perry Mason, it hasn’t become any less thrilling.

One thing that has not changed: Murder has been around since the days of Cain and Abel. As long as there are motives for murder, it will never go away. Also, protagonists will always have to be on their toes to anticipate and find their way over hurdles thrown up by their antagonists.