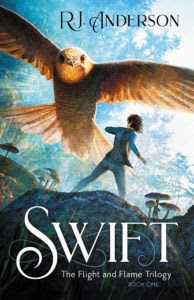 To save her people, a wingless girl must learn to fly.

As a piskey girl born without wings and raised underground, Ivy yearns for flight almost as much as she misses her long-lost mother. But the world outside the Delve is full of danger, and her dreams seem hopeless until she meets a mysterious faery who makes her an enticing offer: If Ivy helps him escape the Delve’s dungeon, he’ll teach her how to fly.

Freeing Richard could cost Ivy her reputation, perhaps even her life. But when her fellow piskeys start to disappear and her beloved little sister goes missing, Ivy has no choice but to take the risk.

Deadly threats and shocking revelations await Ivy as she ventures into a strange new world, uncovers long-buried secrets about her family’s past, and finds that no one—not even herself—is entirely what they seem. 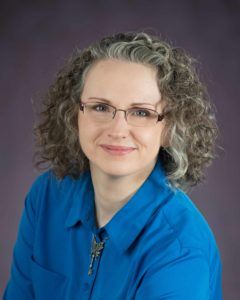 Born in Uganda to missionary parents, RJ. (Rebecca Joan) Anderson is a women’s Bible teacher, a wife and mother of three, and a bestselling fantasy author for older children and teens. Her debut novel Knife has sold more than 120,000 copies worldwide, while her other books have been shortlisted for the Nebula Award, the Christy Award, and the Sunburst Award for Excellence in Canadian Science Fiction. Rebecca lives with her family in Stratford, Ontario, Canada.

FEAR, FAITH AND LEARNING TO FLY


What would you give to feel safe? If you could hide from all life’s dangers and anyone who might harm you, and spend your whole life in a beautiful, comfortable home surrounded by friends, family and all the necessities of life, would you?

That’s the kind of place that Ivy, the teenaged heroine of Swift, has grown up in — a glittering underground complex called the Delve, where safety and protection are paramount, and young girls especially are warned not to take foolish risks. Like climbing the wall of the Great Shaft that leads to the surface, for instance. Or going outside for any reason, except for two special nights of the year. In the world of modern-day Cornwall, the converted tin mine where Ivy and her fellow piskeys live is their only refuge from scheming faeries, greedy humans, and their deadliest enemies of all, the spriggans. And since Ivy’s mother was stolen by the spriggans six years ago, Ivy knows all too well how dangerous the outside world can be.

But as Ivy discovers when she stumbles on a mysterious Shakespeare-quoting prisoner in her people’s dungeon, safety isn’t everything. If “Richard” is telling the truth about what happened to Ivy’s long-lost mother, there may be more going on in the Delve — and outside it — than Ivy ever guessed. How far will she go to find the truth?

When I first started writing Swift, one of the ideas I wanted to explore was how much our prejudices and false perceptions limit us. Ivy’s been taught to fear everything and everyone outside the Delve, and that her poor health and lack of wings means she will never be worthy or whole. But when she starts to ask questions and search for answers, Ivy discovers that much of what she’s always believed is a lie.

What I didn’t realize until I’d finished writing the whole Flight and Flame trilogy is that in many ways, Ivy’s story parallels that of Moses in the book of Exodus. Like Moses when God first called him, Ivy doesn’t think she has anything to offer her people, or any chance of convincing the stern, suspicious piskey queen to set them free. But when Ivy learns to look beyond her fears and self-doubts and step out in faith — even if she’s not sure yet what it means or where it will lead her — extraordinary things happen and her world begins to change.

We all crave safety and security. But if we refuse to step outside our comfort zones or ever question our prejudices, our lives and hearts will stagnate. It’s only when we open ourselves up to truth and act on it, even if it’s hard or unpopular to do so, that we can truly soar. 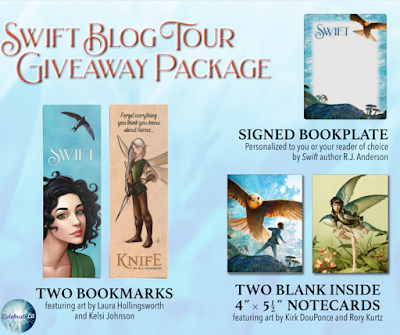 To celebrate her tour, R.J. is giving away the grand prize package of a signed and personalized bookplate, two bookmarks, and two beautiful blank-inside notecards with artwork by Kirk DouPonce and Rory Kurtz!!
Be sure to comment on the blog stops for nine extra entries into the giveaway! Click the link below to enter.
https://promosimple.com/ps/fff5/swift-celebration-tour-giveaway
My Review
Swift is my first introduction to RJ Anderson’s writing. I really enjoyed this beginning to her The Flight and Flame Trilogy. I do not normally read fantasy reads but this one had that cover that just fascinated me. I chose to pick it up and give it a try. This gives me another good reason to give as to why it is sometimes great to try something new outside your comfort zone. I thought this was a really good story. It was full of intrigue, adventure, action, suspense and magic. I loved Ivy’s character right from the start. Such a strong and brave young woman.
I am giving Swift four stars. I am looking forward to seeing what happens next from The Flight and Flame Trilogy, Nomad. I recommend this one for readers who enjoy to read young adult and fantasy books.
I received Swift from the publisher. This review is one hundred percent my own honest opinion.
Posted by Amybooksy at 1:00 AM