Blog Tour and Giveaway: When the Pilot Falls by April Hayman 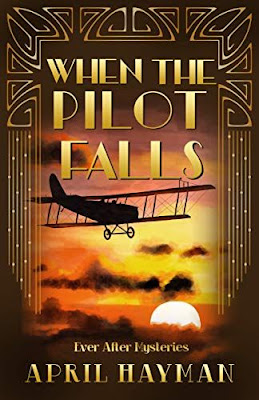 Book: When the Pilot Falls

In 1923, there aren’t many pilots, but Willie Labeau didn’t let that stop… her.

A bear of a man, Hugh Taylor, needs a stunt plane pilot, and despite their rocky introduction, Willie sets off for golden California and a new life as his pilot. There’s just one little thing she has to do in addition to flying.

Leave his past alone. Period.

When the flame of her own curiosity becomes fanned by encouragement from Willie’s sister, the feisty pilot can’t help but do just a little investigating.

Friends rally around her, and with all the information she can find in hand, Willie sets off to rescue Hugh and battle the evil family holding him hostage.

A fierce air race, a sincere act of humility—are they enough to free Hugh and give Willie a chance to be with him… forever?

Find out in this next book in the Ever After Mysteries, combining beloved fairy tales and mysteries. When the Pilot Falls offers a retelling of “East of the Sun, West of the Moon” that will keep you gripped to the edge of your seat as you watch hearts soar and daring dos. 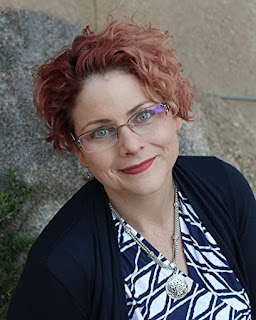 April Hayman lives in the high desert of California with her husband and their three sons. During the day, she focuses on homeschooling the boys and working on client projects. She writes at night when the temperature outside is only somewhat cooler than during the day.

Her passion for reading began in grade school and her teachers often reprimanded her for reading when she should have been completing her math assignments. Now she reads whenever she likes and writes for those who love to read.

April collects fountain pens, has too many pen pals (and always looking for more), journals sporadically, creates art when she can squeeze it in, and hordes stationery.

I’ve always loved to write. I still remember pounding out a science fiction story about a lizard man on my Grandmother’s typewriter, with its sticky ‘e’ key, then excitedly asking to read it to her. She patiently listened and praised my writing. I was thrilled even though, now as an adult, I realized she was humoring me. I continued to write on an off for the next twenty years, but it wasn’t until I found National Novel Writing Month that I really began to write in earnest.

I’d already begun my search into story structure and, one day while researching, NaNoWriMo popped up on my browser window. Interested, I clicked over and I was intrigued. Here was a chance to write 50,000 words in thirty days with a support group of other writers! And, with a day to go, I signed up. After all, how hard is it to write 50,000 words?

Turns out, it’s super hard. Especially when you’re new to story structure, developing characters, and correct pacing. It was a fabulous disaster of a story, but I did manage to hit my mark and “win” that year. And, best of all, I’d met Chautona Havig. She and I became friends and her brilliant writing advice and support has meant the world to me.

Every year after that, except when I moved away, I participated. Eventually I became a Municipal Liaison, the head volunteer and writer wrangler, for our area. It was a lot of fun but not one of those books has been published. They’re just for me and I love them, even if they’re awful.

Eventually, my participation was noticed by my three boys. While all of them enjoy reading to varying degrees, writing was always hard for them. Not that they don’t love to tell a good story. It’s the writing part that’s hard. Anyway, my eldest son finally decided to join the Young Writers Program (NaNoWriMo for pre-teens and teens) one year and got bitten by the writing bug. We’re currently working on his latest story. I’m so happy to have passed on my love of writing to him and his brothers!

For Him and My Family, October 19

The Meanderings of a Bookworm, October 24

For the Love of Literature, October 28

Through the Fire Blogs, October 28 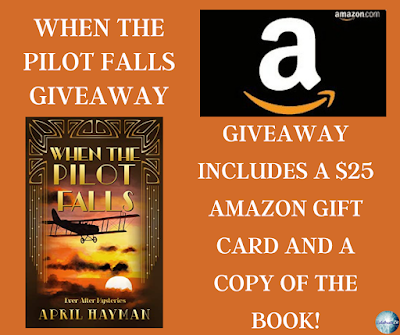 To celebrate her tour, April is giving away the grand prize package of a $25 Amazon gift card and a copy of the book!!

When the Pilot Falls is April Hayman’s contribution to the Ever After Mysteries series. I have read and enjoyed the previous books in this series. I found this one was a great addition to it. I adored Willie right from the start. She showed such courage, determination and bravery that would inspire so many. It is a quick read but full of action and adventure with twists and turns that I did not see coming. Great read!

I am giving When the Pilot Falls four and a half stars. I recommend it for readers who enjoy reading clean historical suspense. I look forward to the next installment from the Ever After Mysteries series, Murder at the Empire by Cathe Swanson.

I received a digital copy of When the Pilot Falls from the publisher, but was not required to write a positive review. This review is one hundred percent my own honest opinion.