This post is part of a virtual book tour organized by Goddess Fish Promotions. Lee Edward Födi will be awarding a Spell Sweeper prize pack: Hand-made miniature broom, hand-made magical creature egg, spell bottle, and bookmarks to a randomly drawn winner via rafflecopter during the tour. Click on the tour banner to see the other stops on the tour. 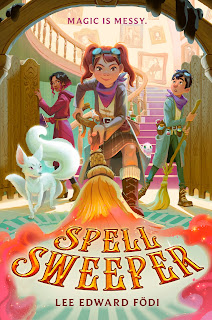 There's nothing magical about wizard school
. . . at least, not for Cara Moone.

Most wizard kids spend their days practicing spells and wielding wands, but Cara? She’s on the fast track to becoming a MOP (a.k.a. Magical Occurrence Purger). You see, when a real wizard casts a spell, it leaves behind a residue called spell dust—which, if not disposed of properly, can cause absolute chaos in the nonmagical world. It’s a MOP’s job to clean up the mess.

And no one makes more of a mess than Harlee Wu. Believed to be the Chosen One, destined to save the magical world, Harlee makes magic look easy. Which makes her Cara’s sworn nemesis. Or she would be, if she even knew Cara existed.

Then one of Harlee’s spells leaves something downright dangerous behind it: a rift in the fabric of magic itself. And when more rifts start to appear around the school, all in places Harlee has recently used magic, Cara is pretty sure the so-called “Chosen One” isn’t going to save the world. She’s going to destroy it.

It will take more than magic to clean up a mess this big. Fortunately, messes are kind of Cara’s thing.

How magic works
(and why we have to clean it up)

In books and movies, wizards stroll around, flicking their wands, turning people into toads or zapping recalcitrant dragons into submission. In reality, it’s not that simple.

It’s like when you squeeze toothpaste onto your toothbrush—there’s always a bit that ends up on your brush handle, the counter, or dripping down your chin. Magic works the same way.

The first thing you learn in wizard school is that there is a Field of Magical Matter. When wizards want to perform a spell (or, if you want to get all official about it, a Magical Occurrence), they have to access the Field. Basically, they have to squeeze a giant magical toothpaste tube. And, like I said, it’s messy, always leaving something behind. We usually refer to it as spell dust, but it’s essentially leftover enchanted residue. How much depends on the Magical Occurrence. A wizard utters a simple spell? You just circle your broom around her feet and go for lunch. Someone magically relocates, let’s say for the sake of argument, a giant statue of the school’s founder? You better strap on your full spell sweeper kit because it’s going to be a loooong day.

But you do need to strap on the kit, because spell dust is definitely not the sort of thing you want to leave sitting around for very long. It causes ALL sorts of problems. 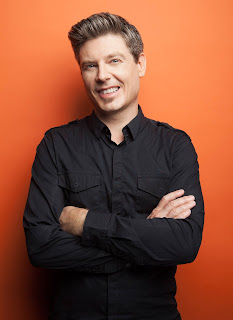 Lee Edward Födi is an author, illustrator, and specialized arts educator—or, as he likes to think of himself, a daydreaming expert. He is the author of several books for children, including The Secret of Zoone and the Kendra Kandlestar series. He is a co-founder of the Creative Writing for Children Society (CWC), a not-for-profit program that helps kids write their own books. He has the joy of leading workshops for kids in Canada, the US, Korea, China, Thailand, and other places here and there. Lee lives in Vancouver, where he shares a creative life with his wife Marcie and son Hiro.