Blog Tour: Review and Giveaway: The Prophet and the Witch by James W George

The Prophet and the Witch 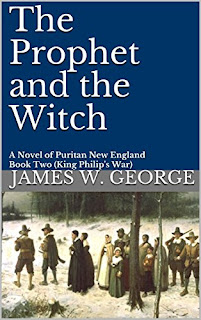 
If you thought New England was dull in the 1670s, get ready for a history lesson.


In the critically acclaimed “My Father’s Kingdom,” debut author James W. George transported his readers to 1671 New England, and the world of Reverend Israel Brewster. It was a world of faith, virtue, and love, but it was also a world of treachery, hatred, and murder.


Four years later, Brewster is a disgraced outcast, residing in Providence and working as a humble cooper. Despite his best efforts, war could not be averted, and now, “King Philip’s War” has begun.


The rebellion is led by Metacomet, known as “King Philip” to the English colonists. He is the tormented son of the great Massasoit, and leader of the Wampanoag nation. Once the most reliable of Plymouth Colony’s allies, they are now the bitterest of enemies. Meanwhile, Metacomet’s mysterious counselor, Linto, despises this war and will do anything to end the bloodshed.


Meticulously researched, “The Prophet and the Witch” is a tale of hope and brotherhood in the face of evil and violence. It features the remarkable cast of fictional and historical characters from book one, including Josiah Winslow, Linto, Increase Mather, Constance Wilder, and Jeremiah Barron. Additionally, new characters such as America’s first ranger, Captain Benjamin Church, bring this chapter of history to life like never before.


It was a glorious sign from the Almighty.  Of that, there could be no doubt.


This was certainly the opinion of Major William Bradford, and few seemed inclined to question the holy assessment of the good major and his magnificent pedigree.  The fact that the garrison commander, the aged and venerated James Cudworth, enthusiastically concurred with his famous underling should have eliminated any debate amongst the Puritan faithful.


Bradford, however, would take no chances, and he zealously reinforced his initial assessment.  “The will of the Lord, my brothers.  The will of the Lord has clearly been made manifest in the night sky.  Our cause is just, and our army is righteous.”


The Reverend John Miles felt obliged to speak, perhaps since it was his own Swansea home currently being used as a military garrison.  “Yea, verily, hear the word of the Lord, recited for the holy soldiers of the Lord.  It is certainly written in the Book of Joel, the sun and the moon will be darkened, and the stars shall no longer shine.  And was not the death of the vile and wicked King Herod sanctified by an eclipse of the moon?  Certainly, Metacomet is a vile enemy of our Lord and given to evil ways, just as King Herod.  Metacomet, this odious King Philip, will indeed pay for his treason.”


Most of the Puritan militia garrisoned in Swansea solemnly bowed their heads.  Some were troubled by the sight of a lunar eclipse on this balmy June night.  The more learned among them recalled their history, and knew that a partially-eclipsed moon, in accordance with prophecy, rose above Constantinople in 1453.  Seven days later, the magnificent city fell to the heathen.


There were also dim mutterings about the Peloponnesian War more than a thousand years ago.  Evidently, a lunar eclipse so greatly troubled the Athenians that their war vessels sat shamefully idle in the harbor.  Ultimately, their enemy exploited their fear and indecision, and destroyed the fleet.


Others were certain they witnessed the image of a human scalp within the eclipse.  Was it the scalp of an Indian, or an Englishman?  Was there even a scalp to be seen, or was it a witchcraft-induced hallucination?  The quiet ruminations within the garrison were increasingly unsettling.


The sullen deliberations continued, and their confident martial zeal was slowly eroding.  Bradford could discern the consternation among his troops, and he continued his exhortation.  “The savages have committed a grave sin, and the Lord has made His displeasure clear with His handiwork in the night sky.  Be brave, and be of good cheer, for certainly the holy Book of Judges commands us to…”


Never before had one hundred devout Puritan men of high character witnessed such blasphemy in the face of both holy and civil authority.  Major Bradford was the second-in-command of the expedition, and the respected son of the deceased and revered Governor William Bradford.  Major Bradford, as usual, demonstrated a cautious temperament in the face of adversity. 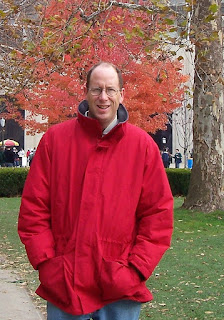 James W. George is a lover of history and historical fiction.  He is a graduate of Boston University and a military veteran.  He is currently residing in Virginia with his wife and children.


He published his critically-acclaimed debut novel, My Father’s Kingdom in January 2017.  The novel described the prelude to King Philip’s War in New England in the 1670s.  The Indie View gave it five stars: “This is high historical drama handled wonderfully…a tale that will fully engage you on every level.”


My Father’s Kingdom is a planned trilogy, and book two, The Prophet and the Witch, was published in September 2017.  This is an epic novel that spans the entire conflict of King Philip’s War, and includes such notable historical figures as Josiah Winslow, Increase Mather, Metacomet, Benjamin Church, and Mary Rowlandson.  The Literary Titan awarded it five stars and a gold medal for October 2017.


The author is looking forward to book three of the trilogy, and he can be found on Goodreads:

I asked Mr George how he came up with the idea to write The Prophet and the Witch....Thank you, Mr George, for taking the time answer my question.

Amy, thank you so much for the question, and thank you for hosting me at your blog.
Like you, I’m a big fan of historical fiction.  One of the most noteworthy events that compelled me to start writing was what I call the “pfftt” syndrome.  Namely, reading a historical novel from a best-selling author that I thought was so contrived and mediocre, it made me say, “Pfftt.  I can write a better novel than that.”  I suspect a lot of other authors get their start due to the pfftt syndrome, whether they admit it or not.
When it was time to choose a subject, my only stipulation was I wanted to write about something relatively obscure.  I feel like there are tons and tons of historical works about WWII, the Vikings, the Tudors, and the Templar Knights, but there’s not nearly enough fiction dedicated to this event and this era.  It’s almost as if we have a gigantic, 150 year void in American history between the Mayflower and the American Revolution (with the exception of the Salem Witch Trials).
Fifty years after celebrating the first Thanksgiving, relations between the Pilgrims of Plymouth Colony and their Native American allies deteriorated so badly, they went to war in 1675.  This was a widespread, catastrophic war that pitted the Puritan United Colonies of New England against the Wampanoag people, and their Native American allies such as the Nipmuc and Pocasset.  Of course, New France tried to throw their hat into the ring too, and the Puritans had their own Native American allies, including the Mohawks and Mohegan.
The uprising was led by Metacomet, the son of the great Massasoit.  Many of us know Massasoit from tales of the Mayflower and the first Thanksgiving (he is even depicted in a Charlie Brown Thanksgiving special!)  The English colonists referred to Metacomet as “King Philip,” and thus, it was known to history as King Philip’s War.
The more I researched the topic, the more transfixed I became.  In my opinion, this conflict is often presented in an overwhelming, confusing fashion, and people quickly lose interest.  There were just so many competing Native American nations that it’s often difficult to keep track of it all.  In my opinion, however, a novel is the perfect vehicle to really immerse yourself in this era of history.
So much of this conflict is utterly fascinating.  There was not one, but two mysterious deaths that contributed to the tension, including Metacomet’s older brother.  The Puritan doctrine of predestination that guided their thoughts and actions is, in my opinion, one of the most astounding things in all of religion and history.  The adversity and suffering endured by all involved in this conflict was truly monumental.
Ultimately, however, the war and the clash of cultures became the perfect opportunity to explore questions of faith and religion.  Can you imagine how frightening and bizarre the English colonists must have appeared to the Native Americans in the seventeenth century?  Can you imagine how confusing the English religion must have seemed?
One thing you’ll note in the reviews of the book is I really wanted to avoid “choosing sides.”  As in any conflict, there was a great deal of virtue on both sides, but both sides were prone to ignorance and violence.  Ultimately, “The Prophet and the Witch” is a study of faith, friendship, and courage in the face of evil and violence.
Thank you again for hosting me today!


James W. George will be awarding a $20 Amazon/BN GC to a randomly drawn winner via rafflecopter during the tour.

The Prophet and the Witch is the second installment from James W George’s My Father’s Kingdom series. Thank goodness the beginning starts with a summary of what had happened in the first book. Since I have not read this one yet, I found the summary quite helpful. I was intrigued seeing the author’s vision of what living in the 1670s New England was like. The vivid descriptions made me feel as though I was right there living among the people.

The Prophet and the Witch is so so good. I found it to be well written and rich in historical details. Mr George obviously did his research on this era. I hope there will be more in this series. I will, also, be adding the first book to my wishlist.