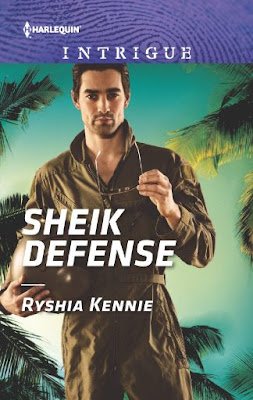 Tossed overboard, Ava Adams had been left for dead, drifting at sea. But security specialist Faisal Al-Nassar was determined to find her. He owed her father a great debt and had never forgotten the connection he and Ava had once shared. Yet after rescuing Ava he discovered she barely remembered him.Amnesia had left Ava uncertain of who had tried to kill her. She did know, however, that Faisal was a man she could trust. The sheik's embrace was familiar and enticing…and possibly even more dangerous. How could she succumb to feelings for her protector when what she didn't know could get them both killed?

It was less than an hour since Faisal had received that fateful call that Ava was missing. Now he looked long and hard at the face of the young woman who lay dead on the cold steel of the examining table. Her hair was long, almost to the middle of her back. She was brunette and a few years older than Ava. After that, the similarities stopped.

He’d insisted on viewing the body in the hope that the similarities would somehow give him a much-needed clue. Now he didn’t know why he’d bothered. It was depressing and frightening all at the same time. Looking at her frightened him for Ava and saddened him for the deceased woman’s family.

“She may have been asphyxiated,” the coroner said.

He listened as the coroner went into some detail on why he believed that could be a possibility.

A chill ran through him like none he’d felt before. He’d stood in this position many times but never had he felt the haunting fear that the person before him could have been someone he knew and loved. He almost took a step back. That thought combined with the cold steel and sharp smell of disinfectant that depersonalized death was almost too much. This wasn’t Ava but someone had loved her.

Regret and anger snaked through him as he thought of how this young woman had died unnecessarily, how it could just as easily have been Ava on that slab. The reality was as disturbing as it was unthinkable. Whether they could prove it or not, he was sure that this woman had died of unnatural causes. It wasn’t right or fair. And he knew it happened much too often. He’d thought of adding a branch of investigations geared solely to violence against women. He’d seen too much of it in his work. But now wasn’t the time for such considerations.

Five minutes later, Faisal was heading across the hospital parking lot to a charcoal 1967 mustang he kept in Miami for his rare visits to the city. He slipped behind the wheel and leaned back against the plush leather, the keys in his lap, his arms crossed and a frown on his face.

A woman who supposedly should have been Ava was dead. The fact that the decedent had been in Ava’s room and Ava was still the registered patient, indicated that Ava was the target. Now there were questions that needed to be answered and quickly.

Where had Ava gone? He tamped down the panic he’d felt at losing her when he’d only just found her.  He had to stick to facts.

The Canadian prairies are my home and while the prairie landscape is blessed with beautiful blue skies, it also has four seasons that come on full throttle – especially winter and because of that I like to travel.  Often on those trips, stories are born.

In 2011 I won my city's writing award, and was the first romance writer to do so since its inception.  In 2013 my romantic suspense was a semi-finalist in the Kindle Book Awards.  Published in historic romance and paranormal romance as well as romantic suspense, in February 2016, my first novel was published by Harlequin Intrigue.

There’s no lack of places to set a story as my imagination and the too long prairie winters may find me seeking adventure.  The memories of those worlds both near and far, the words of a stranger, the furtive look one man gives another, often become the catalyst for a suspenseful story with a deadly villain and an intrepid hero and heroine who must battle for their right to love or even their right to live.

When not dreaming of other stories, I can be found scouting out a garage sale or two, dusting off my roller blades or just thinking about the next adventure that may be miles away or in my own backyard.

Ryshia Kennie will be awarding a signed copy of Sheik Defense (international) to a randomly drawn winner via rafflecopter during the tour.
a Rafflecopter giveaway


The more you comment, the better chances of winning.

Sheik Defense is the fourth installment from the Desert Justice series and the first book I have read by Ryshia Kennie. I thought it was pretty good. I liked the interactions between Ava and Faisal. They find themselves in quite a bit of dangerous and adventurous situations that kept me engaged in what would happen chapter after chapter. The suspense really kept me on edge. Definitely not a predictable story.

I would give the Sheik Defense 4 1/2 stars. I would like to go back and read the other books in the Desert Justice series.

I received this back from the other. This review is 100% my own honest opinion.