Review Tour and Giveaway: The Villainous Viscount by Lucinda Elliot 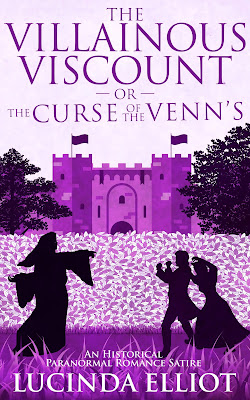 An appreciative satire of the cliches of classical Gothic, with the eponymous Villainus Viscount, a haunted castle, a family curse, and a spirited heroine.

When Clarissa Greendale inherits the fortune of disreputable uncle she hardly knows, she does not expect to find herself forced into marriage with an aristocratic fortune hunter and wild, brawling, debauched social outcast. Not only that, but her name featured some way down on the list of eligible heiresses he planned to court. Still,Clarinda has always found Harley Venn set off the most unmaidenly tinglings in her; that is one consolation...

Yet neither did Clarinda expect to inherit the legacy of a wrongdoing from half a century before. For the wicked if beguiling Lord Venn seems to have inherited a family curse, which, having dispatched the main perpetrators of the old crime, now moves on to their heirs, who are just as wild a set of rakes as their elders. There are rumours of violent deaths preceded by appearances from an inexorable hooded spectre, of inexplicable strikes of lightning, and of haunted mirrors.

The light-hearted Harley Venn dismisses all these as conjuring tricks. He even hires a drunken charlatan of a professional magician to prove it.

Clarinda is far from sure that there is any rational explanation. Still, it would take more than an enforced marriage to an incorrigible pugilistic libertine or persecution from malevolent spectres to damage her steely nerves and sense of the ridiculous.

This lively Gothic comedy, written as a good natured satire of the cliches of classical Gothic, gives the reader a warm-hearted and courageous heroine, a rascally but beguiling anti-hero and an authentic historical background to the delightfully over-the-top adventures, a cast of wholly believable characters, an engaging love story and many chills on its way to its tumultuous conclusion.

‘He tried his beguiling smile again, an expert blend of mischief and underlying sorrow. “You underestimate the influence you could have on me. Bad as I am, and young as you are, I know that you could be my saving angel.”

“No, Sir. But I am happy to hear of your intention to change your way of life, and I wish you all happiness with the young lady who does feel herself equal to the role you honour me by offering.”

She could sense that he was dizzy with humiliation, but refused to let her fortune slip though his fingers so easily. Now, he called on another quality necessary for a pugilist – self-control. Rising from his knees, he took her hands before she could retreat, caressing them. “Clarinda, you remember that you were the only respectable young lady who spoke kindly about poor Foyle’s death. You were not cold and implacable, then.”

Her lips thinned. “I am only so now in refusing your offer of marriage.”

He dropped her hands. “So be it, Ma’am.” Too outraged to make the normal civilities, he turned away.

A blinding flash of lightning outlined the window, where a hooded, cloaked figure stood seemingly suspended on the air. It extended one skeletal hand as if reaching towards them and vanished even as the thunderclap came.

Swearing, Harley Venn dashed to the window. As the peal of thunder died away, Clarinda came up behind him. “We saw that oddity before.” She gazed about the empty street below. “This time it has appeared at a first floor window. That is extraordinary.”’ 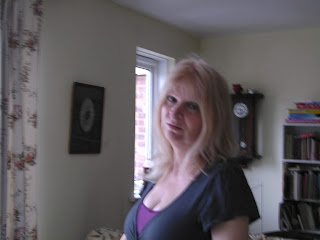 Lucinda Elliot has recently become the proud honouree of the B.R.A.G medallion for outstanding fiction for her Gothic historical paranormal romance, 'That Scoundrel Emile Dubois' - (available from amazon both in print and on Kindle for the very low price of 0.99 plus VAT, as the author writes to share her stories, not to make a profit).

She was born in England and loves writing Gothic stories - as she grew up living in a series of isolated rambling period houses, in Buckinghamshire, Devonshire and North Wales among other places that would make perfect settings for such stories, that may not be surprising.

After that she lived and worked in London for many years, and now lives in mid Wales with her family, and has greatly improved her Welsh, but there is some way to go.

She loves working out and weight training, and was once a Sportsfighter (long since retired). She likes body sculpting, too. She shows a geeky streak in her interests such as classic novels, history and environmental matters.

She loves creating strong female characters to provide an effective counterpoint to the gung-ho males. She can't resist putting humour into all of her writing, dark or otherwise.

Her latest novel 'The Villainous Viscount Or The Curse of the Venns', another historical Gothic with undercurrents of dark humour, came out in August 2016.

At present she is working on a sequel for 'That Scoundrel Emile Dubois'.

When reading 'That Scoundrel Emile Dubois' the author hopes the reader will laugh out loud as well as shudder at Sophie's Gothic horrors as she becomes trapped in a great house staffed by the wicked Emile's band of brigands.

When reading 'Ravensdale' she hopes to give the reader a laugh and a journey through an over-the-top romantic highwayman (and highwaywoman) adventure that sends up the tropes of traditional historical romance.

'Aleks Sager's Daemon', a fantasy novel revolving around an author obsessed by the life of the tragic Russian author Alexander Pushkin, is darker, but she hopes the reader has to smile at parts, for all that.

In 'The Villainous Viscount' the author provides some more Gothic tropes she has always enjoyed - a haunted castle with secret passages, a family curse, and a vengeful spectre. Add to this the wicked but beguiling young pugilistic Viscount, the plain but sensuous bride he has married to get his wandering hands on her fortune, and a vivid cast of secondary characters, and the usual comedy and the reader is in for a lively read.

Authors always have worked out far more about their characters than they can possibly show in a book, even a longish one - not to mention all that clutter in their heads gleaned from historical research, etc. Lucinda Elliot's blog fills in these sorts of details about her characters.

Lucinda Elliot hopes you will visit her blog on [http://sophieandemile.wordpress.com/] if you would like to find out more about her books, the characters themselves, her other writing, her literary criticism, and reviews of both traditionally published and self published novels.

Lucinda Elliot will be awarding free Kindle or pdf copies of all of her books to a randomly drawn winner via rafflecopter during the tour.

The Villainous Viscount: Or the Curse of the Venns is a fun and unique read. I enjoyed the humor of it that made me laugh out loud a few times. Viscount Harley Venn and Carlinda Greendale are quite entertaining together. The mystery and curse that needed to be solved made an additional plus to the story.


I give The Villainous Viscount: Or the Curse of the Venns four stars. I would love to read more by Lucinda Elliott in the future.