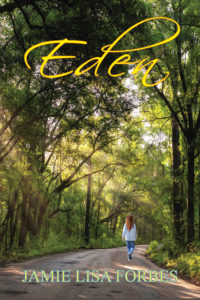 Rowen Hart has been raised as the pampered son and only child of a prominent family in the small community of White Rock, North Carolina. It’s the 1950s and he’s drifting through the days, following the life path his parents have planned for him and preparing to go away to college. When his father’s suicide turns his world upside down, he finds himself responsible for his mother in their suddenly reduced circumstances that leave them dependent on his uncle, his father’s business partner. Ill prepared to take over as head of the family, Rowen doesn’t know which way to turn. Then a neighbor’s ten year old daughter comes to live with them, baffling him with her wild behavior and never ending attempts to win his approval and making his new responsibilities even more overwhelming. As Rowen tries to find his way, he begins to question everything about his upbringing, his current circumstances and his plans for the future as they turn to dust in his hands.

“Throughout this beautifully written story (Unbroken), I pictured the scenes, the characters, and visualized it all as if I walked among them. Five stars.”-Laurel Rain-Snow, Rainy Days and Mondays “Unbroken is a powerful, absorbing book from the first page to the last. Forbes’ Wyoming ranch background adds rich flavors to the story. The author draws realistic, complex characters. Unbroken is an unvarnished testimonial to a way of life that few of us know.”– Mary E. Trimble, author of ‘ TUBOB: Two Years in West Africa with the Peace Corps’ “The Widow Smalls, is a collection of wonderful stories that will elicit a range of emotions, following a number of different themes, like loss, jealousy, regret and acceptance. Each of the stories was as well written as the last, and I enjoyed each one immensely. Wonderful diverse plots, linked with the similar thread of ranch life, and defined characters, made for a truly great read. Author Jamie Forbes, has really created something special here, a must read for all short story lovers.”- Michelle Geist, Verified Amazon Review

Rowen shuffled to his mother’s room slowly so as not to spill the soup and bumped the door open with his elbow. His mother’s favorite scent, lavender, greeted him, but the scent underneath it, the human stench, nearly made him gag. He’d never smelled her body scent before at the old house. He didn’t even realize she had one. He hated himself for his revulsion. She was sick, after all. It wasn’t her fault that she was here, it was his daddy’s and his daddy had seen fit to put himself in a place where you couldn’t even go shout at him. So far, Rowen hadn’t managed to make things any better. What a sorry excuse of a son he was if he couldn’t even bring her lunch without feeling sick and ashamed.
The dimmed room gave him an excuse to hesitate. What she would see as his eyes adjusting would cover his effort to master himself. She hadn’t allowed an open shade here since they’d moved in. Her classical music station played in the background, piano chords softly rolling.
“Brahms, Rowen. Isn’t it lovely?”
In addition to the odor, he hadn’t gotten used to the sight of her lying in bed every day. Up until his daddy had died, he’d woken every morning to the rap of her heels crossing the bedroom floor. “The sun is waiting to greet your smile, Alexander Rowen Hart,” she’d sing out as she snapped up the shades. He’d grown to hate that routine about the time he’d sprouted underarm hair. And then off she’d flown down the stairs, hollering for Adeline to help with whatever events she was heading up that week for the Daughters of the Cape Fear, or the Women’s Missionary Union. Throughout the kitchen, there had been full calendars and lists and invitations waiting to be mailed.
“Yes, Mama, nice piano.”
On the night table, a fan cycled back and forth. His mother sat up. Tendrils of hair stuck to her forehead. “I heard that row with you and Adeline this morning. I know how much you wanted to be on time for Franklin’s trial. I’m sorry, Rowen.”
​He gestured with the tray he clutched, “Adeline made you some broth.”
​“It’s too hot to eat, but we must not hurt Adeline’s feelings when she devotes herself so. I’m ready, you can set it down. No, you mustn’t charge out the door, as if you are ashamed to spare a moment with me. I want to hear everything that happened this morning.”
​He perched at the edge of the bed.
​“Were they all asking where I was? I know Claretta Ingersoll has been saying awful things about me, saying that I was too lavish and that was the cause of your daddy’s suicide. When he never talked to me about our finances, ever. I’m sure they’re all repeating her lies all over town. I’m sure the courtroom was full of it.”
​“No one was talking about you, Mama.”
​“Are you sure? Did you see Claretta there?”
​“I had to sit in the back because I was late. She mighttabeen there.”
​“I’m telling you she was there and saying horrible things about me.”
​“How do you know that?”
​She paused, and her lower lip drooped. “I heard it, that’s all.”
​“Who could you have heard it from? Not one of  'em has been here.”
​“Rowen, you’re young, still a child practically. It’s how people talk, that’s all, how they’ve always talked. Especially since everyone loved your father and so they must have someone—his widow—to blame for his death. That’s what makes it comprehensible. Now stop talking back to me and tell me what happened this morning.”
​“Miz Whitney’s little girl testified.”
​“What did she say?”
​“She said her pa and Franklin had been fussin’ in the house, that her pa was drinking but that he left and went to the car and Franklin shot him.”
​It gratified him that a spark of interest lit in her eyes. The pillows rustled as she leaned forward. “Was she telling the truth?”
​“I don’t know. But Franklin’s attorney said Whitney was coming after him with a pipe wrench.”
​“Where was her mother?”
​“Sitting behind Franklin. That girl was bawling like crazy and Miz Whitney wouldn’t touch her, wouldn’t hug her, wouldn’t even wipe her face.”
​His mother picked up the spoon and sipped a thimbleful of broth. “The problem was as a girl, Coman Whitney, wasn’t aspretty as other girls in her milieu. Bless her heart, she could not shed her baby fat though they took her to doctor after doctor. She did have such a marvelous wit that she could make a stone laugh 'till it cried.”
“Her birthday parties were well attended and not just because her family had money. She had friends. But she was the autumn baby, the autumn of her parents’ lives that is, and that blunder always results in the most undisciplined children. At fifteen, she mortified her parents by carrying on so with that Whitney boy. They met at some Negro tavern, I heard. And then she ran away and married him. Of course, one must allow for the possibility that she had to get married.
“Whitney, mind you, was just a farm laborer’s boy. He had no education or money. Poverty must have been a rude awakening to Coman—no more parties—and well, a young lady might sour.
“The last time I saw her was in the sewing shop, you know, The Stitch-in-Time.  Eden was in a stroller. Such china blue eyes that child had with gorgeous red hair. ‘Eden,’ I said, ‘what a lovely name,’ although I had never heard of anyone naming their child after the place where the Devil brought Evil into the world. Pray that it isn’t an omen.”
​She collapsed back against the pillows. “I believe that’s all I’ll have now, Rowen.” 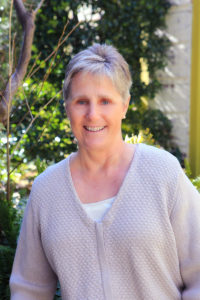 Jamie Lisa Forbes was raised on a ranch along the Little Laramie River near Laramie, Wyoming. She attended the University of Colorado where she obtained degrees in English and philosophy. After fourteen months living in Israel, she returned to her family’s ranch where she lived for another fifteen years. In 1994, she moved to Greensboro, North Carolina. In 2001, she graduated from the University of North Carolina School of Law and began her North Carolina law practice. Her first novel, Unbroken, won the WILLA Literary Award for Contemporary Fiction in 2011. Her collection of short stories, The Widow Smalls and Other Stories, won the High Plains Book Awards for a short story collection in 2015. Her law practice gave her the opportunity to travel many of the back roads of North Carolina and meet the unique and diverse individuals who inspired Eden. Website: https://www.jamielisaforbes.com/ Facebook: https://www.facebook.com/Jamielisaforbes Twitter: https://twitter.com/JamieLisaForbes Buy Eden by Jamie Lisa Forbes To be announced closer to publication.

This giveaway is for the winner’s choice of print or ebook however, print is open to the U.S. only and ebook is available worldwide. There will be 2 winners. This giveaway ends July 1, 2020,midnight pacific time. Entries are accepted via Rafflecopter only. a Rafflecopter giveaway 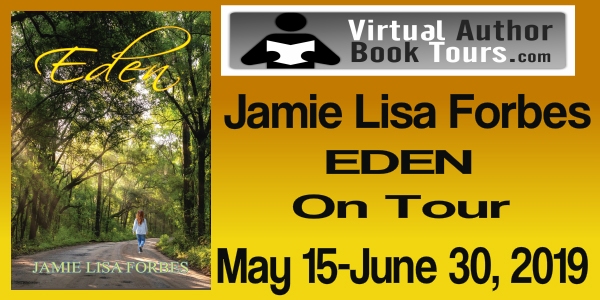 Eden is the first book I have read by Jamie Lisa Forbes I thought Rowen’s story was unique and was a good read. I was interested in traveling back in time and watching him grow through the years. There were a couple scenes that was hard to get through but the tale quickly picks back up several pages after.

I am giving Eden three and a half stars. I would be interested in reading more by this author in the future. I think this one is worth a read.