Blog Tour and Giveaway: Rhapsody in Red by Donn Taylor 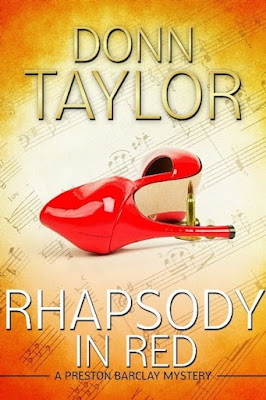 “IT WAS A BAD DAY TO FIND A CORPSE ON CAMPUS.”

Preston Barclay is a reclusive history professor with musical hallucinations. The feisty Mara Thorn is a newly arrived professor with a strong desire to be left alone. But finding the body of a murdered colleague shakes them out of their quiet lives. Worse yet, police accuse them of her murder, forcing the ill-matched pair into an uneasy alliance for their defense. However, that proves more perilous than they’d thought. To succeed, they have to outwit the police, avoid discipline by the college’s incompetent administration, and escape threats and attacks by the unseen and ruthless forces behind the murder. It’s a one-in-a-hundred chance, and if they fail, they’ll end up unemployed, behind bars, or worse . . . 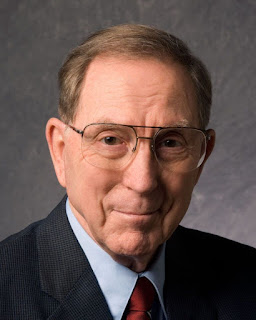 Donn Taylor led an Infantry rifle platoon in the Korean War, served with Army aviation in Vietnam, and worked with air reconnaissance in Europe and Asia. Afterward, he earned a PhD in Renaissance literature and taught literature at two liberal arts colleges. His published works include six suspense novels and a book of poetry. He is a frequent speaker at writers’ conferences. He lives in the woods near Houston, TX, where he writes fiction, poetry, and essays on current topics.

About Rhapsody in Red: From teaching eighteen years in small denominational colleges, I knew that part of the academic world well. So when I came to write the Preston Barclay Mystery Series, that’s where I turned. What would happen if someone dropped a murder into that placid environment?

That was the basic question. But that part of the college world also has internal conflicts and tensions that even the best-intentioned people can’t avoid. That leads most faculty into being discreet. But what would happen if one professor kept saying openly what the rest of the faculty were only thinking? That’s why the series protagonist, Professor Preston Barclay, is always in trouble.

In writing the series I wanted to mainly to give readers an interesting story about a murder and the complications leading to its solution. But I also wanted them to enjoy the story’s interplay of strong and often quirky personalities navigating the varied conflicts of the small-college world.

Whether I’ve achieved those objectives will be decided by each individual reader. But CBA Retailers and Resources Magazine wrote that  Rhapsody in Red is “peopled with academia’s most intriguing eccentrics and snobs,” and Christian Review of Books wrote that it’s “a delightful change from the clichés of most novels.”

Readers who enjoy Rhapsody in Red may want to look at its two sequels, Murder Mezzo Forte and Murder in Disguise.

For Him and My Family, August 22

Because I said so — and other adventures in Parenting, August 26 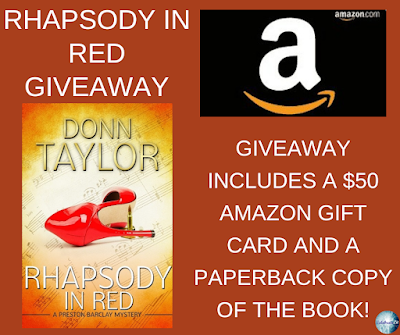 To celebrate his tour, Donn is giving away the grand prize of a $50 Amazon gift card plus one paperback copy of Rhapsody in Red!!

I have enjoyed reading books written by Donn E Taylor in the past and was happy to have the opportunity to read his latest, Rhapsody in Red. It is a suspense filled book that begins the Preston Barclay Mystery series. I thought it was pretty good. At first, I thought it was a little slow. But after the first three chapters, I was hooked and did not want to put it down until I was finished.

I am giving Rhapsody in Red four and a half stars. I recommend it for readers who enjoy reading clean suspense. I look forward to reading the next installment from the Preston Barclay Mystery series, Murder Mezzo Forte, to see what happens next.

I received a copy of Rhapsody in Red from the publisher, but was not required to write a positive review. This review is one hundred percent my own honest opinion.