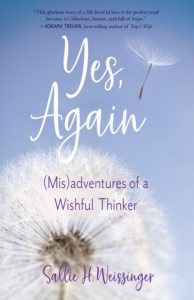 In this laughter-through-tears memoir, Sallie H. Weissinger, a late-in-life widow, recounts the highs and lows of navigating the tricky online dating world of the 2000s. Interwoven throughout her adventures in search of a new relationship are stories from her childhood as a military brat, her southern heritage, her various marriages, and the volunteer work in Central and South America that helped her keep moving forward through it all. Weissinger keeps her sense of humor as she meets men who lie, men who try to extort money, and men with unsavory pasts. When she experiences even more loss, her search for a partner becomes less important, but—with the help of friends and dogs—she perseveres and, ultimately, develops her own approach to meeting “HIM.” Blending the deeply serious and the lighthearted, Yes Again shows us that good things happen when we open up our minds and hearts.

"A funny, touching, and ultimately uplifting story of a woman searching for love and purpose.”—Kirkus Reviews “Weissinger celebrates her 75th birthday in Yes, Again by taking the reader on a tour of her big heart and where that heart has taken her. This glorious story of a life lived in love is the perfect read because it's hilarious, honest and full of hope. We are all lovers, or we wish we were and Sallie shows us how: never give up, occasionally give in and don't stop believing. Brava!”-Adriana Trigiani, Bestselling author of Tony's Wife "If you like to read memoirs, you won’t be disappointed in Sallie H. Weissinger’s Yes, Again. I really loved it....it was a pleasure to read a book written by a woman who didn’t let age get in the way of seeking love and living life fully. While she may not have realized it when writing, Sallie provided a life lesson for those of us of a certain age: There’s no reason not to take charge of our lives and make things happen. Whether it’s looking for love, reaching personal and professional goals, or living on purpose every day, women can disrupt aging and rise to life’s challenges."—Camille Goscicki, vitalaging4women.com "After reading Sallie's soulful book, I have to say this gifted writer got the love she wanted the old-fashioned way . . . she earned it!"-Lacy J. Dalton, singer and songwriter "Linearity works for many things; however, in Sallie H. Weissinger's potent book (and even more potent life) she shows us how tapping into grace can be a tangible way of entering into mystery, meaning, and direction. By recounting times of staggering loss, loneliness, self-doubt, perseverance, and openness to the ineffable, Sallie demonstrates how the journey of life can be a glorious pathway for those with a bit of daring!"-Bill Say, MA, life coach, Process Work Diplomate, and instructor at CIIS, JFK University, and the Wright Institute

More than ten years after I lost my cherished husband, Matt, and after a decade of doing the online personals without meeting “HIM,” I knew there had to be a better way.  But what?  I was going to set up my own personalized search engine.  One morning, putting my former executive recruiter skills to work, I wrote a job description for the ideal Love Candidate.  PASTRAMI was the acronym for the qualities I sought in a soul mate:  P for physically fit and politically liberal, A for adventurous and animal friendly, S for spiritual, and T for travel aficionado.  Also included on my wish list of attributes were religious (not or not very), aging gently and active (another A!), monkey business (good sense of humor), and intelligent and intellectual.  My recruiting methodology would be to approach my friends and colleagues- I called them PASTRAMI Love Liaisons – to connect me with PASTRAMI Love Candidates.  I would offer a referral award to the successful Love Liaison:  a significant donation to a non-profit of their choice if, after a year, “HE” and I were a couple.  But I needed help to develop an interactive website and the text and graphics for my search.  I also needed to decide which of my inner voices to listen to:  Sweet Pea, my optimistic voice (and the nickname I called my lively, zany mother), telling me to go for it, or my critical voice, Steve (named for my logical, ever-practical father), telling me to not make a fool of myself.  While my opposing voices aren't exactly my parents' voices, they contain the essence of them.

How to get the word out to these potential “PASTRAMI

Love Liaisons” was presumably the easy part. Instead of using the web to post my profile on established dating sites and contact men who’d done the same, I would set up a personalized website and spread the word, one friend at a time. I was brewing a plan.

My sister, formerly an editor of Mademoiselle and editor‐in‐chief of Louisiana Magazine, writes and edits masterfully. She has her own business website, and her son Clayton is her web designer and webmaster. I knew they would not only help me think out the steps to design my site, they’d put the website together. My three-person Team PASTRAMI would consist of a creative consultant (Virginia), editor and content manager (Virginia), and designer and technical troubleshooter (Clayton), overseen by Team PASTRAMI’s CEO/seeker-in-chief and writer (me).

All I had to do was enlist them in my scheme.

The idea gestated in my mind for several months. Sweet Pea and Steve had a field day.

Steve: “It’s stupid. She’ll fail with PASTRAMI. And make a fool of herself.”

Sweet Pea: “She has the chutzpah to carry it off.

Anyway, you can’t stop her. She’s always gone for what she wanted.”

Steve: “Yes, but she was younger then. Now she’s too old.”

Sweet Pea: “Her heart is young. She can still rock and roll.”

Steve: “If it were in the cards for her to meet someone,

she’d have met him by now. Anyway, what does she need a man for?”

Sweet Pea: “It isn’t about need. It’s about want. She wants to love again.”

I listened to Sweet Pea and ignored Steve. I tried to figure

out how to make PASTRAMI work and why I wanted it to work.

It seemed pretty simple. I wanted to be happy, as happy as I had been with Matt. As he was dying, he had said, “Sarah, I want you to have a rich life when I’m gone.” After his death, happiness seemed a distant land I would never revisit, but now PASTRAMI offered hope: the shiny penny vehicle leading back to the possi of time, place, and opportunity coming together. But, for the time being, I kept my idea to myself.

In late May 2016, I broke my silence. I spilled the beans

about PASTRAMI to my sister, Virginia. I needed input, especially from someone who knew me well and who, if she endorsed the concept, would become my dedicated PASTRAMI colleague.

My sister was a safe choice—she lives far away and wouldn’t be around to watch me wrestle with my attacks of indecision. She is more of a “go for it” person than I am, and she knows me to be gutsy at times and diffident at others.

As the president and cofounder of a global nonprofit

organization that facilitates economic opportunities for women entrepreneurs, Virginia travels throughout Asia, Europe, Latin America, Africa, and the Middle East, developing client–supplier relationships, promoting policies, and speaking at international conferences. She was returning to Washington, DC, from a business trip to China and had a four‐hour layover at San Francisco Airport. We met at the International Terminal for a sisterly

catch-up. Toward the end of our visit, with less than an hour before she’d have to go back through the security area, she asked for a status report on my online dating. “I’ve given up on it, Gin,” I said, using her nickname from when we were kids. “It hasn’t gone anywhere since I broke off with Keith. I’m not finding anyone who meets me even halfway.I would rather be alone than with someone who leaves me hungry.” I told her about my letdowns, lackluster dates, the various not‐even‐close non‐adventures. She laughed at some of my encounters and commiserated about others.

We were short on time, and I wanted to use the remaining

minutes well. “But I have an idea to bounce off you. I have mixed feelings about this and want your honest reaction. And, if I decide to do it, I need you and Clayton in on it. I can’t do it without you.” As travelers passed us, heading out of the terminal to catch taxis and shuttles, and others, fresher and less rumpled, walked toward the security area to catch flights to foreign countries, I spoke about the PASTRAMI letters, the Candidates whose lights I hoped to find hidden under bushels, the personalized PASTRAMI website, the donation to a nonprofit, and my qualms about being able to carry it off.

The more I explained my idea, the more my sister lit up.

In the midst of the scores of travelers maneuvering their suitcases and chattering on their cell phones, we were in high school again—she sixteen to my fourteen, talking about boys and plotting how to get them to notice us. “Oh, Sallie,” she said with her eyes filled with amusement and approval, “it’s a trip and a half.”

The prospect of my waging an all‐out recruitment effort to find guys—or one guy—who embodied the PASTRAMI attributes set her off into a full‐body, full‐belly laugh. She put both hands over her mouth, to keep from spewing out her coffee as she howled, “PASTRAMI! PASTRAMI! Sallie, it’s fabulous. It’s outrageous and totally ridiculous. PASTRAMI! You can absolutely do this.” 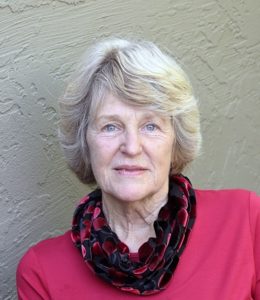 (c) COURTNEY FLAVIN[/caption]
Sallie H. Weissinger is a native of New Orleans and was raised as a military brat away from the South (Germany, New Mexico, Ohio, Japan, and Michigan). Every summer, she and her family returned to visit her mother’s relatives in New Orleans and her father's family in a small Alabama town. She has lived most of her life in the Bay Area and also in New Orleans. These days, “home" includes not only New Orleans and Berkeley, but also Portland, Oregon, where she lives most of the time with her husband, Bart McMullan, a retired internal medicine doctor and health care executive, and their three dogs. A retired executive herself, she now teaches Spanish and does medical interpreting for non-profit organizations in Central America and the Dominican Republic. Weissinger is a passionate member of the Berkeley Rotary Club and has served on the boards of Berkeley Rotary, the Aurora Theatre in Berkeley, and the East Bay (formerly Oakland) SPCA. Website: https://www.yesagainmemoir.com/

This giveaway is for 3 print copies, 1 per winner and ends on November 6, 2021, 12 midnight, pacific time. Entries accepted via Rafflecopter only. a Rafflecopter giveaway 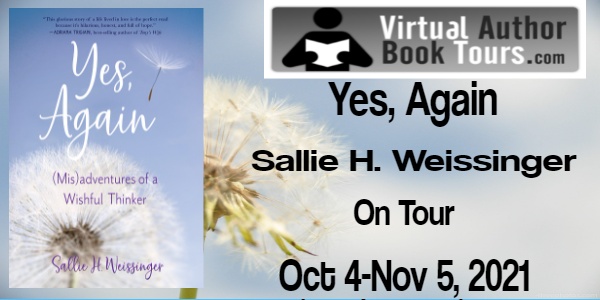 Yes, Again: (Mis)adventures of a Wishful Thinker is a beautiful memoir by Sallie H Weissinger. I admired her courage in telling her story. I wanted to keep reading to see if or how she was able to overcome such a devastating life changing loss. I found myself laughing out loud at times and grabbing my own tissues at others. It a read that warmed my heart and gave some much needed hope and inspiration.
Yes, Again: (Mis)adventures of a Wishful Thinker will be getting five stars from me. I recommend it for readers who enjoy reading memoirs and for those who have experienced the loss of a loved one and are needing some encouragement.
I received a paperback copy of Yes, Again: (Mis)adventures of a Wishful Thinker from the publisher, but was not required to write a positive review. This review is one hundred percent my own honest opinion.
Posted by Amybooksy at 1:00 AM