Blog Tour and Giveaway: Lost in the System by Nancy Jo Wilson 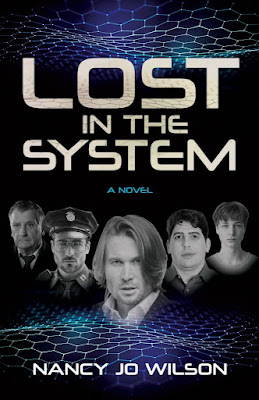 Book: Lost in the System

Jaded, 24th century grifter Smullian O’Toole has been sentenced to 1000 days of Life Modification Therapy. All is well until the glitch.

Smullian enjoys serving his prison term. Other than the daily upchucking, Life Modification Therapy is the sweetest sentence 24th century Earth offers. The system biotransposes his essence into a different 21st century person daily, whereas his body stays in the future. The therapy rehabilitates felons by teaching them the value of honest labor. On day 777, Smullian hears a disembodied voice utter, “Father to the Fatherless.” Thus, begins the mother of all system glitches that shatters Life Mod rules and regulations.

Instead of following the usual program, the system thrusts Smullian into the case of David Hawthorne, a missing teenaged orphan. The case cuts a little too close to home for the grifter, who has been on his own since he was twelve. As Smullian bounces from host to host, he realizes the glitch shows purpose and design. Someone, maybe the Father to the Fatherless, controls the situation, not the technicians at Life Mod. This someone peels back the façade Smullian has placed between himself and the world. Against his will, he begins to care about the kid and his older sister, Lydia. Each new host forces him to confront his own inner demons—as well as pointing him to David.

What initially seems the clear-cut case of a runaway—grows more ominous with every clue. Smullian knows he’s not the hero type. But he’s all David has. 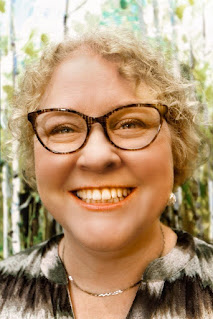 Nancy Jo Wilson wrote her first short story in second grade and continued writing throughout childhood. In high school, she wrote for the teen section of the local newspaper and received a writing scholarship from the state of Tennessee. After high school, she moved on to the college of her dreams—Florida State University. The dean who spoke at the college orientation encouraged students to major in what challenged them, not what came easily. So, she pursued science, majoring in Biology Education, as well as Theater electives. She came to regret the decision, because her first love was always the written word.

She returned to writing in her mid-thirties. Through mystery shopping reviews and online writing challenges, she sharpened her skills. Many times, she earned the distinction of editor’s choice on Faithwriters.com. She published a few articles, but mainly focused on her blog, six5mom.com. She wrote her first book Escape the Amoz, for her oldest son and published it through Kindle Direct. It won second place for science fiction in the 2009 Do it Write! competition. Lost in the System, her current book hit stores in fall 2021.

Street signs often inspire my character names. Not kidding. Drive through downtown Jacksonville, and you’ll see many of the names from my first novel spelled out on those green rectangles. When I drove past Smullian Trail, a handsome, charming, fast-talking character popped into my head. I immediately thought, “He’s mischievous.”

Before long, I wondered what would happen if Smullian, who has no knowledge of Christianity, meets the holy God. What obstacles would Smullian have to overcome? How do you explain to someone who views love as a transaction that God is love? Lost in the System tackles the tough questions unbelievers ask about Christianity but wraps the heavy content in a fuzzy blanket of sarcasm and tongue-in-cheek humor. Science fiction may be the core of this story, but mystery, romance, and redemption fill it out.

I hope you enjoy this story as much as I enjoyed writing it.

Because I said so — and other adventures in Parenting, September 10

For Him and My Family, September 19 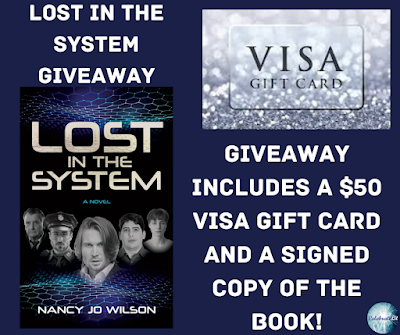 To celebrate her tour, Nancy is giving away the grand prize package of $50 Visa gift card and a signed copy of the book!!

Lost in the System: A Novel is an intriguing book or the future by Nancy Jo Wilson. I enjoyed how the author was able to use her imagination to bring the element of faith into the future. It was fun getting to know the main character, Smullian, and taking this journey with him. There were some twists that I did not see coming that kept me engaged. Overall, it was a good and fun read.

I am giving Lost in the System: A Novel four stars. Readers who enjoy reading clean science fiction with the emphasis of faith will definitely want to pick this one up. Even those who are not fans will want to give this one a read.

I received a paperback copy of Lost in the System: A Novel from the publisher, but was not required to write a positive review is one hundred percent my honest opinion.