Blog Tour: Review and Giveaway: One Sip at a Time: Learning to Live in Provence by Keith Van Sickle 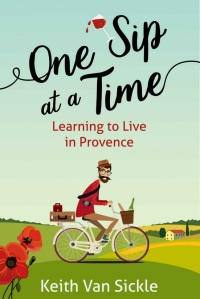 One Sip at a Time: Learning to Live in Provence

Can a two-career couple really pick up stakes and move to Provence? Keith and Val had a dream – to live in Provence, the land of brilliant sunlight, charming hilltop villages and the deep blue waters of the Mediterranean. But there were two problems: they weren’t French speakers and they had full-time jobs. So they came up with a plan… Follow their adventures (and misadventures) as they quit their jobs, become consultants and split their time between two countries. Laugh along as they build a life in Provence, slowly mastering a new language and making friends with the locals over long meals and just a bit too much wine. If you’ve ever dreamed of changing gears and learning what joie de vivre is really all about, you won’t want to miss this delightful book.

The next morning we got up early, stuffed ourselves with warm and flaky croissants, and hit the road.  We had a long drive ahead but would be in Provence by nightfall—we smiled just thinking about it.  Then I looked around, saw all the cars with French license plates, and shuddered.

The French road system is excellent. The country is covered by a comprehensive network of autoroutes—similar to our Interstate Highway System—along with plenty of secondary roads. They are in uniformly good condition and are well marked so you can find your way. If there is any downside to the French road system it would have to be...French drivers.

The French like to drive much too fast.  No matter what road you are on or how fast you are driving, you can be sure that a French driver will be tailgating you. I think it is required by law. You could be setting a new land speed record at the Bonneville Salt Flats and if you looked in your rearview mirror you would see a French driver just inches from your tailpipe.

In fact, it is possible that French drivers own all the land speed records, how could they not? It’s just that after setting them they stopped for lunch and a nap and forgot to call the people at Guinness to make it official.

After tailgating you for a while, the French driver will finally decide to pass you. There are two basic ways to do this:  on a nice, roomy autoroute or on a narrow, winding country road.

On the autoroute, the obvious thing is for the other car to move one lane to the left in order to pass you. But no, there’s no challenge in that.  Instead, the preferred method is to pass you in your own lane. This means zooming by so closely that you can tell if the other driver had onions for lunch.  And it requires that you, the one being passed by this insane guy, drive perfectly straight. Anything that might cause your car to move even a millimeter to the left—a cough, a sneeze, a fart—could result in a fiery death.

On the narrow, winding roads, by contrast, the French driver doesn’t do anything so silly as try to pass while close to you. No, no, it is much better to move as far to the left as possible so as to be able to terrorize oncoming traffic, careening back into your lane only at the last possible instant. Ah, the thrill! The grandeur!

And then there’s the stopping.  Even in situations where it would be incredibly dangerous to stop—say, in a traffic circle or the middle of an intersection—French drivers will frequently stop, look at the road signs, discuss which way they should go, have a smoke, and maybe talk about last night’s soccer game, before finally moving along again.

In other words:  If you care at all about safety, take the train.

Keith Van Sickle is a technology industry veteran and lifelong traveler who got his first taste of overseas life while studying in England during college. But it was the expat assignment to Switzerland that made him really fall in love with Europe. After returning to California, he and his wife Val dreamed of living abroad again but were unable to find another expat gig. So they decided to invent their own. Now they split their time between Silicon Valley and St-Rémy-de-Provence, delving ever deeper into what makes France so endlessly fascinating. Find the author on Facebook and Twitter Visit his website Subscribe to his mailing list and get information about new releases. Buy the book on Amazon.com

Visit each blogger on the tour: tweeting about the giveaway everyday of the Tour will give you 5 extra entries each time! [just follow the directions on the entry-form]
Global giveaway open to all 5 winners

CLICK ON THE BANNER TO READ REVIEWS, EXCERPTS, AND GUEST-POST

Have you, as a reader, ever read anything that makes you laugh so hard that you embarrass yourself in public by letting loose a loud snort? Well, One Sip at a Time is one of those type of books. So, my warning, dear reader, this book is not for public reading! Unless you enjoy public humiliation! I laughed so hard so many times throughout. I love seeing what it was like to travel through France as an American. I learned so much about how things are done there. Things I never thought of, such as, driving, pharmacies, stores, politics, etc. My high school French teachers certainly did not teach all that I learned from this book.

One Sip at a Time is indeed, a fun, entertaining, and delightful read, packed full of humor. I honestly did not expect to like it that much, as memoirs are not my favorite kinds of reads. I am so glad I chose to give it a chance. I absolutely loved it!