Blog Tour: Review and Giveaway: Saving Nary by Carol DeMent 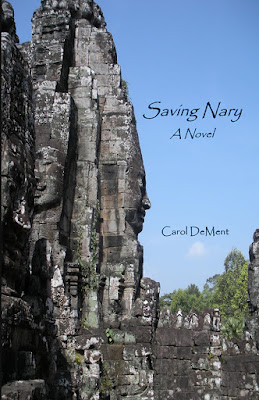 A Finalist in the 2017 Next Generation Indie Book Awards, Saving Nary explores the losses, loyalties and secrets held within families broken by war and genocide. This compelling novel presents a palette of unique characters who struggle to make sense of the events that led them to America, even as they ponder the bewildering culture and lifestyle of their new homeland.

Refugee Khath Sophal lost everything when the Khmer Rouge swept into power in Cambodia: his livelihood gone, his family dead or missing; his sanity barely intact from the brutality he has been forced to witness.

Now resettled in the Pacific Northwest, Khath treads a narrow path between the horrors of his past and the uncertainties of the present. His nights are filled with twisted dreams of torture and death. By day he must guard constantly against the flashbacks triggered by the simple acts of daily living, made strange in a culture he does not understand.

Then Khath meets Nary, a mysterious and troubled Cambodian girl whose presence is both an aching reminder of the daughters he has lost, and living proof that his girls, too, could still be alive. Nary’s mother Phally, however, is another matter. A terrible suspicion grows in Khath’s mind that Phally is not who or what she claims to be. A split develops in the community between those who believe Phally and those who believe Khath. And those, it seems, who don’t really care who is right but just want to stir up trouble for their own personal gain.

Khath’s search for the truth leads him to the brink of the brutality he so despises in the Khmer Rouge. His struggle to wrest a confession from Phally ultimately forces him to face his own past and unravel the mystery of his missing daughters.

As the sun rose, Khath sat cross-legged in a lotus position in the small Buddhist temple nestled below Khao I Dang Mountain. The barbed wire perimeter fence separated the mountain from the refugee camp, but the mountain lent its power to the area nonetheless. Pra Chhay and two other monks chanted the Heart Sutra, a prayer of enlightenment, the rhythmic drone rising and falling in a soothing and familiar hum as the scent of incense hung heavily in the hot, humid air. About thirty refugees sat on the straw mats covering the wooden floor of the bamboo temple. The lips of many were moving as they softly chanted along with the monks.Khath’s lips remained still, his heart empty. If asked, he would not disavow the teachings. He believed the teachings, yet the words of the Buddha had lost the power to move or to comfort him. He felt somehow distant from the teachings, as though they controlled behavior on a different world from the one he inhabited. It was a very lonely feeling.The monks chanted on, a background hum that began to irritate Khath. He might as well be listening to the drone of mosquitoes as he toiled on the dikes under the watchful eyes of the Khmer Rouge, their guns aimed and ready, afraid to brush the insects away from his face lest he be beaten for not putting full attention into his work.
Observing the others in the temple, Khath envied them their faith. Pra Chhay often said there were two levels of Buddhism, one being the simple devotions taught to uneducated villagers; the other consisting of the higher practices and theories studied by the scholar monks.

Carol DeMent worked in the field of South East Asian refugee resettlement for seven years, and completed master's level research into international refugee resettlement policy. She lived for two years in Thailand as a Peace Corps volunteer and has traveled extensively in South East Asia. Her first novel, Saving Nary, was a  Finalist in the 2017 Next Generation Indie Book Awards.
https://www.amazon.com/Saving-Nary-Carol-DeMent/dp/1522982906
https://www.amazon.com/Carol-DeMent/e/B01CRJ1EVA
https://www.goodreads.com/author/show/15089080.Carol_DeMent

Carol DeMent will be awarding $10 Amazon/BN GC to a randomly drawn winner via rafflecopter during the tour.

Saving Nary gives a reader a glimpse of what it is like to be a refugee. Seeing the tragedy, the struggles, the losses, the heartache, the devastation, and the torture is so heart wrenching. This is by no means a light read. It deals quite a bit of heavy issues that makes the reader really think. Saving Nary is most definitely a must read for those who want to read a book that tells the story through the eyes of a refugee that had to leave their homeland to find hope and triumph in another part of the world.