Blog Tour: Review and Giveaway: A Sea of Sorrow 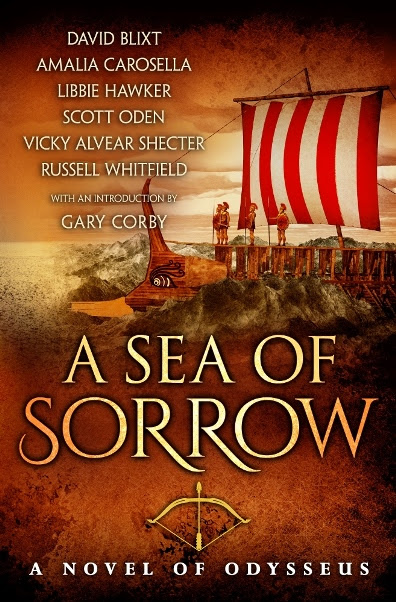 A Sea of Sorrow: A Novel of Odysseus

Odysseus, infamous trickster of Troy, vaunted hero of the Greeks, left behind a wake of chaos and despair during his decade long journey home to Ithaca. Lovers and enemies, witches and monsters--no one who tangled with Odysseus emerged unscathed. Some prayed for his return, others, for his destruction. These are their stories… A beleaguered queen’s gambit for maintaining power unravels as a son plots vengeance. A tormented siren battles a goddess’s curse and the forces of nature to survive. An exiled sorceress defies a lustful captain and his greedy crew. A blinded shepherd swears revenge on the pirate-king who mutilated him. A beautiful empress binds a shipwrecked sailor to servitude, only to wonder who is serving whom. A young suitor dreams of love while a returned king conceives a savage retribution. Six authors bring to life the epic tale of The Odyssey seen through the eyes of its shattered victims—the monsters, witches, lovers, and warriors whose lives were upended by the antics of the “man of many faces.” You may never look upon this timeless epic—and its iconic ancient hero—in quite the same way again.

Amalia Carosella graduated from the University of North Dakota with a bachelors degree in Classical Studies and English. An avid reader and former bookseller, she writes about old heroes and older gods. She lives with her husband in upstate New York and dreams of the day she will own goats (and maybe even a horse, too). Amalia's novels include Tamer of Horses, Helen of Sparta, By Helen's Hand, and Daughter of a Thousand Years.

David Blixt's work is consistently described as "intricate," "taut," and "breathtaking." A writer of Historical Fiction, his novels span the early Roman Empire (the COLOSSUS series, his play EVE OF IDES) to early Renaissance Italy (the STAR-CROSS'D series) up through the Elizabethan era (his delightful espionage comedy HER MAJESTY'S WILL, starring Will Shakespeare and Kit Marlowe as inept spies). His novels combine a love of the theatre with a deep respect for the quirks and passions of history. Living in Chicago with his wife and two children, he describes himself as "actor, author, father, husband. In reverse order."

Russell Whitfield was born in Shepherds Bush in 1971. An only child, he was raised in Hounslow, West London, but has since escaped to Ham in Surrey. Gladiatrix was Russ's first novel, published in 2008 by Myrmidon Books. The sequel, Roma Victrix, continues the adventures Lysandra, the Spartan gladiatrix, and a third book, Imperatrix, sees Lysandra stepping out of the arena and onto the field of battle.

Scott Oden was born in Indiana, but has spent most of his life shuffling between his home in rural North Alabama, a Hobbit hole in Middle-earth, and some sketchy tavern in the Hyborian Age. He is an avid reader of fantasy and ancient history, a collector of swords, and a player of tabletop role-playing games. When not writing, he can be found walking his two dogs or doting over his lovely wife, Shannon. Oden’s previous works include the historical fantasy, The Lion of Cairo, and two historical novels, Men of Bronze and Memnon. He is currently working on his next novel.

Vicky Alvear Shecter is the author of multiple books set in the ancient world, including the YA novels, CLEOPATRA'S MOON, based on the life of Cleopatra's only daughter, and CURSES AND SMOKE: A NOVEL OF POMPEII and the adult historical collaborations, A SONG OF WAR, A YEAR OF RAVENS, and A DAY OF FIRE. She has written a mid-grade series on mythology (ANUBIS SPEAKS, HADES SPEAKS, and THOR SPEAKS) as well as two award-winning biographies for kids. She a She is a docent at the Michael C. Carlos Museum of Antiquities at Emory University in Atlanta.

During the Blog Tour we will be giving away a paperback copy of A Sea of Sorrow: A Novel of Odysseus! To enter, please enter via the Gleam form below. Giveaway Rules – Giveaway ends at 11:59pm EST on November 17th. You must be 18 or older to enter. – Giveaway is open to residents in the US only. – Only one entry per household. – All giveaway entrants agree to be honest and not cheat the systems; any suspect of fraud is decided upon by blog/site owner and the sponsor, and entrants may be disqualified at our discretion. – Winner has 48 hours to claim prize or new winner is chosen. A Sea of Sorrow

A Sea of Sorrow: A Novel of Odysseus is a collection of 6 stories by 6 different authors. These stories include:

Song of Survival by Vicky Alvear Shecter
Xenia in the Court of the Winds by Scott Oden
Hekate's Daughter by Libbie Hawker
The Siren's Song by Amalia Carosella
Calypso's Vow by David Blixt
The King in Waiting by Russell Whitfield
There is, also, an Introduction by Gary Corby and an Epilogue by Vicky Alvear Shecter.

I have to admit, this book is not the genre I normally read. Nor have I read anything by any of these authors. I am so glad I decided to go ahead to read it because I loved it. I enjoyed every one of these stories. If I had to pick a favorite, I think I would have to go with Amalia Carosella's The Siren's Song. I cannot wait to find more by her and the others.