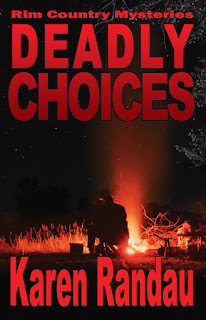 
In book 3 of the Rim Country Mysteries, an elderly woman stumbles into the campsite as Rita, Cliff, and Rita’s long-lost mother Willow enjoy s’mores and folk music around the fire. The action heats up when Willow falls for the key suspect, Rita’s old friend and mentor. Rita discovers her mother isn’t the woman she thought she was, and Rita must overcome a spate of life-threatening obstacles before anyone else dies.


“You’ve become an accomplished musician.” I envisioned Willow sitting in a circle with other artists who lived at the commune where she retreated after my father’s death.


We all leaped to our feet when a gunshot sounded in the distance.


“What was that?” Willow looked like a spooked gazelle ready to sprint to higher ground.


“Someone’s target practice, I imagine.” Cliff used his calming police detective’s voice but took a step toward the trail where Lucy McMann had gone earlier.


“Yeah.” Cliff rolled his tongue against the inside of his cheek. “Seems strange.”


I hoped my smile wasn’t too taut to hide my concern from Willow. I stood beside her and watched the beam from Cliff’s flashlight as he walked several yards down the trail. When he returned, he tried a nonchalant tone to ask for another s’more. Despite emoting confidence, he sang with less gusto, often squinted into the surrounding darkness, and monitored the path leading into the forest.


An hour later, I heard a feeble cry for help and stood to face the trailhead.


A white-haired woman in a red gingham shirt stumbled from the forest. She collapsed next to our tent and rolled to her back. I gasped at the arrow protruding from her chest. Light from the fire flickered on the arrow’s bloody shaft.


Cliff rushed to her. “It’s the woman we met earlier. Lucy McMann.”

A native of the southwest U.S., Karen Randau pens the Rim Country Mystery series set in the quaint fictional mountain town of Rim Vista, Arizona, below the Rim of the Colorado Plateau.
The series features fast-paced stories with intricate plots, lots of action, and a pinch of romance, told from the point of view of protagonist Rita Avery.


Karen has traveled internationally and witnessed famines, violence, and hopeful people working to overcome abject poverty. She draws on both her creativity and personal experience to weave together an interesting cast of characters with rollercoaster-like twists and turns.


Karen Randau will be awarding a $15 Amazon/BN GC
to a randomly drawn winner via rafflecopter during the tour.

Deadly Choices is the third installment from the Rim Country Mysteries series. It is, also, my first intro to Karen Randau's writing. Even though it is part of a series, I did not feel lost or feel like I was missing anything. I still would like to go back and catch up on what had happened previously. This book is packed full of action, danger, adventure, mystery, and suspense. There were so many twists and turns, I felt like my head was spinning. I loved every single page and had to keep turning them to see what would happen next.